Jesus describes how people will be judged - Catholic Courier 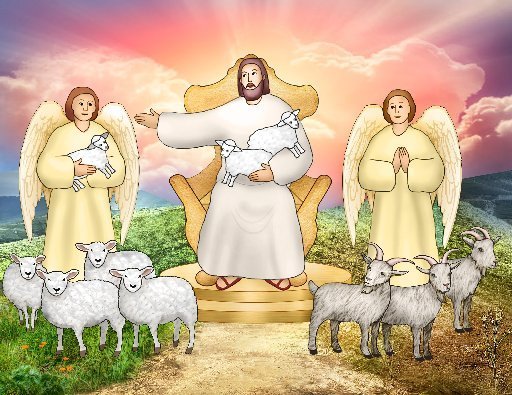 Children’s Story: Jesus describes how people will be judged
Bible Accent: Separation in the Bible
Saint for Today: St. John of the Cross
Puzzle: Fill in the blanks

Jesus describes how people will be judged

Jesus had just told his apostles some parables to remind them to always be prepared for his return at the end of the age.

After he was done, Jesus explained what would happen upon his return.

“When the Son of Man comes in his glory, and all the angels with him, he will sit upon his glorious throne, and all the nations will be assembled before him,” Jesus said.

He explained that he would separate everyone into two groups, much like a shepherd separates the sheep from the goats in his flock.

Jesus said he would place the righteous people — the sheep — on his right.

“Come, you who are blessed by my Father,” Jesus said he would tell the righteous. “Inherit the kingdom prepared for you from the foundation of the world. For I was hungry and you gave me food, I was thirsty and you gave me drink, a stranger and you welcomed me, naked and you clothed me, ill and you cared for me, in prison and you visited me.”

Jesus said that the righteous people would wonder when they had seen Jesus in need and had taken care of him.

“Lord, when did we see you hungry or thirsty or a stranger or naked or ill or in prison, and not minister to your needs?” he said the unrighteous would ask.

“And these will go off to eternal punishment, but the righteous to eternal life,” he said.

1. How will people be separated for judgment?

2. Where will the righteous and unrighteous go?

TRIVIA: What did Jesus say about judging others? (Hint: Luke 6:37)

Answer: Stop judging and you will not be judged.

Bible Accent: Separation in the Bible

There are many places in the Bible that talk about things that have been separated.

For example, in Genesis 1:6-8, we read that when God was creating the world, he made a dome in the middle of the waters to separate one body of water from the other.

In 1 Kings 11:9-13, we read that King Solomon didn’t follow God’s laws as his father, King David, had done. So God decided to punish Solomon by making his kingdom into two separate kingdoms, Judah and Israel. This happened after Solomon’s death, and the house of David ruled over Judah only.

And in Luke 16:19-31, we read the parable of a rich man who had a good life and a poor man named Lazarus who had a bad life. When Lazarus died, angels carried him to the bosom of Abraham, where he was comforted. When the rich man died, he went to the netherworld, where he was in torment. When the rich man asked for Lazarus to bring him water, Abraham replied that a great chasm separated the two sides so no one from the netherworld could cross.

Juan de Yepes de Alvarez was born in Spain in 1542. He entered a Carmelite monastery in 1563 and was ordained a priest in 1567.

He thought the Carmelites were too lax, so he joined with St. Teresa of Avila to reform the order. In 1568, he entered the first reformed house for men, taking the name John of the Cross.

John encountered severe opposition and was imprisoned for nine months in a monastery cell. That’s when he began writing poetry. “The Dark Night of the Soul” is his most famous work.

After this death in 1591, he was recognized as cofounder of the Discalced Carmelites. We remember him on Dec. 14.

Using the hints provided, fill in the blanks in the sentences about goats and sheep.