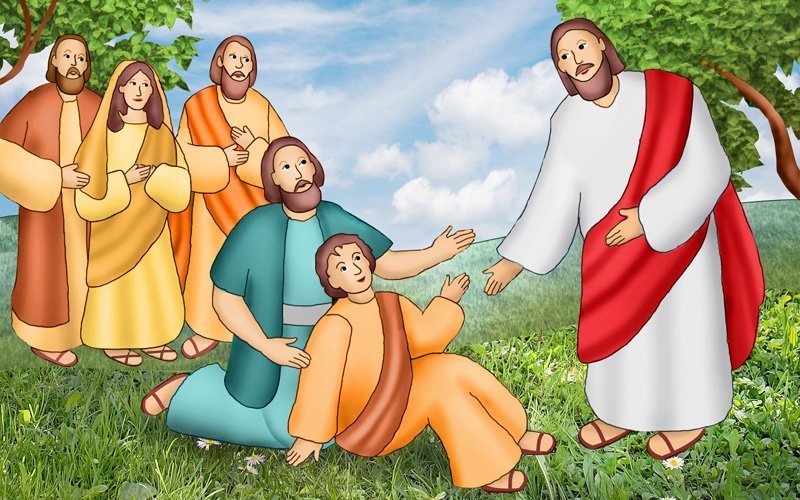 Jesus drives out an unclean spirit

Jesus drives out an unclean spirit

Jesus had asked Peter, James and John to go up a high mountain with him while the rest of the apostles remained behind.

Peter, James and John watched as Jesus was transfigured. His clothes became dazzling white, and afterward Elijah and Moses appeared and spoke with him.

When Jesus and his friends came down the mountain, they saw quite a sight. A large crowd had gathered around the rest of the apostles, and some scribes were arguing with them.

“What are you arguing about with them?” Jesus wanted to know.

Someone from the crowd answered.

“Teacher, I have brought to you my son possessed by a mute spirit,” a man said. “Wherever it seizes him, it throws him down; he foams at the mouth, grinds his teeth and becomes rigid. I asked your disciples to drive it out, but they were unable to do so.”

When the boy was brought to Jesus, the spirit threw the boy into convulsions. The boy fell on the ground, rolled around and foamed at the mouth. The boy’s father said this had been happening to the boy since childhood.

“It has often thrown him into fire and into water to kill him,” the father explained. “But if you can do anything, have compassion on us and help us.”

“‘If you can!’ Everything is possible to one who has faith,” Jesus replied.

“I do believe, help my unbelief!” the boy’s father cried out.

As the crowd rapidly closed around him, Jesus rebuked the unclean spirit.

“Mute and deaf spirit, I command you: Come out of him and never enter him again!” Jesus said in a clear, firm voice.

As the unclean spirit came out of the boy, it shouted and threw the boy into convulsions.

After the spirit left him, the boy did not stir.

“He is dead!” people in the crowed exclaimed.

Jesus took the boy by the hand and raised him. The boy stood up.

Afterward, the apostles took Jesus aside so they could speak to him privately. They wondered why they were unable to drive out the unclean spirit themselves.

“This kind can only come out through prayer,” Jesus said.

1. Who was possessed by an unclean spirit?

2. Why couldn’t the apostles drive out the spirit?

TRIVIA: Jesus drove demons out of two men in the territory of the Gadarenes. Where did Jesus send the demons after driving them out? (Hint: Matthew 8:31-32)

Answer: Into a herd of swine.

There are many places in the Bible that tell of Jesus driving out demons. One time, he was accused of using the power of demons to drive out demons.

We read in Matthew 12:22 that a blind and mute man possessed by a demon was brought to Jesus. Jesus drove out the demon, and the man was able to speak and see.

When the Pharisees heard what happened, they made an accusation against Jesus.

“This man drives out demons only by the power of Beelzebul, the prince of demons,” they said.

Jesus pointed out that a house divided against itself cannot stand.

“And if Satan drives out Satan, he is divided against himself; how, then, will his kingdom stand? And if I drive out demons by Beelzebul, by whom do your own people drive them out?” Jesus said. “But if it is by the Spirit of God that I drive out demons, then the kingdom of God has come upon you.”

Jesus also said that blasphemy against the Holy Spirit — such as the sin of attributing to Satan what is the work of the Spirit of God — is the only sin that will not be forgiven.

St. John of God was born in Portugal in 1495. He was taken from his parents when he was 8 to live in Spain as an estate manager and a soldier.

John became a Christian at about age 40. In 1538, he became renowned and respected for his hospital work, and he devoted himself to caring for and sheltering the needy.

John died in 1550, and his followers were organized into the Hospitaller Order of St. John of God.

We remember John on March 8.

Unscramble the letters in each word and arrange the words in the correct order to discover a quotation from the children’s story.

Answers: believe, my, help, do, I, unbelief

I do believe, help my unbelief.