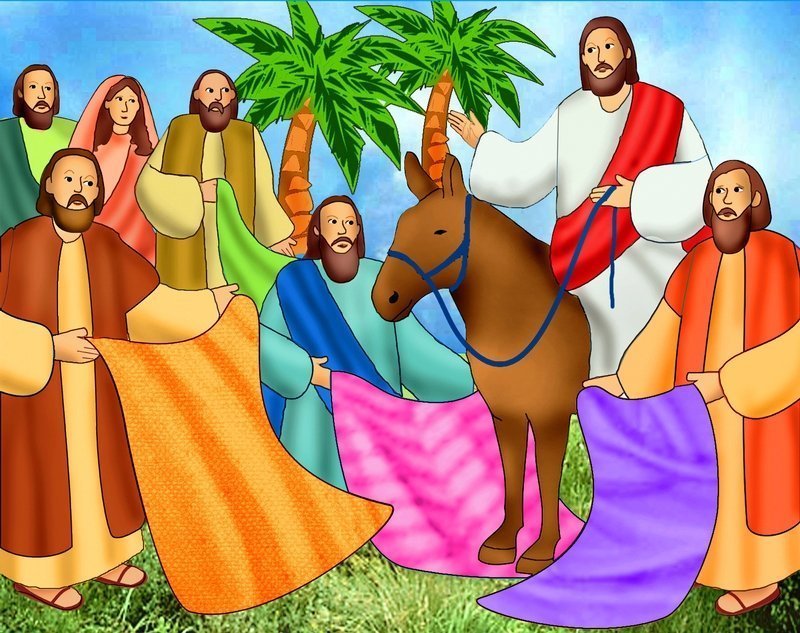 When they had reached Bethphage, on the Mount of Olives, near Jerusalem, Jesus sent two of his apostles ahead of them. He said, "Go into the village opposite you, and immediately you will find an ass tethered, and a colt with her. Untie them and bring them here to me. And if anyone should say anything to you, reply, ‘The master has need of them.’ Then he will send them at once."

The two men left for the village and found the animals as Jesus had described. They brought the animals back to Jesus and they put their cloaks over them for Jesus to sit on as he rode into Jerusalem. This fulfilled a prophecy from the Scriptures that said, "Say to daughter Zion, ‘Behold, your king comes to you, meek and riding on an ass, and on a colt, the foal of a beast of burden."

As Jesus rode toward the city, a large crowd gathered to greet him. Some of them spread their cloaks on the road in front of him while others cut branches from the trees and placed them on the road as well.

As Jesus approached Jerusalem, the people chanted, "Hosanna to the Son of David, blessed is he who comes in the name of the Lord; hosanna in the highest." By the time Jesus reached the city gates, the people of Jerusalem were asking, "Who is this?"

The people in the crowd answered, "This is Jesus the prophet, from Nazareth in Galilee."

When Jesus reached the temple area he found it as if it were a marketplace. He knocked over the tables of the money changers and the chairs of the men who were selling doves. As he did so, he said, "It is written: ‘My house shall be a house of prayer,’ but you are making it a den of thieves."

The blind and the disabled came to Jesus while he was still in the temple area, and he healed them. When the chief priests saw these things and heard the people crying out, "Hosanna to the Son of David," they were angry. They said to Jesus, "Do you hear what they are saying?"

Jesus answered, "Yes; and have you never read the text, ‘Out of the mouths of infants and nurslings you have brought forth praise’?" After that Jesus left Jerusalem to go to Bethany, where he spent the night.