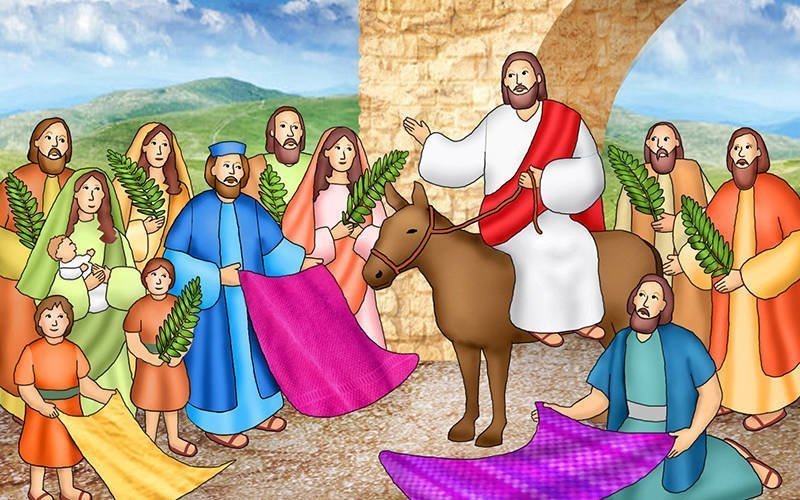 This is the artwork for Kids’ Chronicle for March 28, 2021. (Illustration by Linda Rivers)

Jesus and the apostles were traveling to Jerusalem so they could celebrate the Passover feast.

As they traveled along, Jesus told his friends what was about to happen to him.

“The Son of Man will be handed over to the chief priests and the scribes, and they will condemn him to death and hand him over to the gentiles, who will mock him, spit upon him, scourge him and put him to death, but after three days he will rise,” Jesus said.

When the men reached Bethphage and Bethany at the Mount of Olives, not far from Jerusalem, Jesus sent two of the apostles on an errand.

“Go into the village opposite you, and immediately on entering it, you will find a colt tethered on which no one has ever sat,” Jesus said. “Untie it and bring it here. If anyone should say to you, ‘Why are you doing this?’ reply, ‘The Master has need of it and will send it back here at once.’”

The two apostles went to the village and found the colt tethered at a gate outside on the street. As they untied the colt, some bystanders questioned them.

“What are you doing, untying the colt?” they demanded to know.

They brought the colt to Jesus and placed their cloaks upon the animal. Jesus then sat on the colt.

As Jesus rode the colt toward Jerusalem, people who saw him along the way recognized him. They spread their cloaks on the road, and others spread leafy branches that they had cut from the fields.

The people who preceded Jesus repeatedly cried out:

“Hosanna! Blessed is he who comes in the name of the Lord! Blessed is the kingdom of our father David that is to come! Hosanna in the highest!”

Jesus entered Jerusalem and went into the Temple area. He looked around at everything and, since it was already late, went out to Bethany with the apostles.

1. Where did Jesus and the apostles stop just before entering Jerusalem?

2. What animal did Jesus tell two of his apostles to get for him?

In Mark 10, not long before Jesus’ entry into Jerusalem, two of his apostles came up to him.

“Grant that in your glory we may sit one at your right and the other at your left,” said James and John, the sons of Zebedee.

Jesus had just finished explaining to his friends that he was going to be arrested and condemned to death. He asked James and John if they could suffer the same fate.

“The cup that I drink, you will drink, and with the baptism with which I am baptized, you will be baptized; but to sit at my right or at my left is not mine to give but is for those for whom it has been prepared,” Jesus told them.

After Jesus’ death and resurrection, the original apostles traveled many places to spread the word of God and Jesus. It was a dangerous time, because Christians were being persecuted. But this did not stop Jesus’ friends.

According to the New Testament and early Christian history, 10 of the 11 original apostles who preached after Jesus’ death and resurrection met the same fate as the Lord.

Many of them were even put to death by crucifixion. James was the first to be killed for his faith. His brother, John, is said to have escaped martyrdom and lived to be an old man.

St. Stanislaus of Krakow was born to noble parents in Poland in 1030. When he grew up, he became a priest and canon at Krakow Cathedral.

He was elected Krakow’s bishop in 1072. After becoming bishop, he and King Boleslaus II were at odds over the king’s immorality and injustice. Stanislaus rebuked the king several times and then excommunicated him. The king retaliated by executing Stanislaus himself in 1079.

We remember Stanislaus on April 11.

3. ___ Jesus told the apostles that when they prayed, they should forgive others. (verse 25)