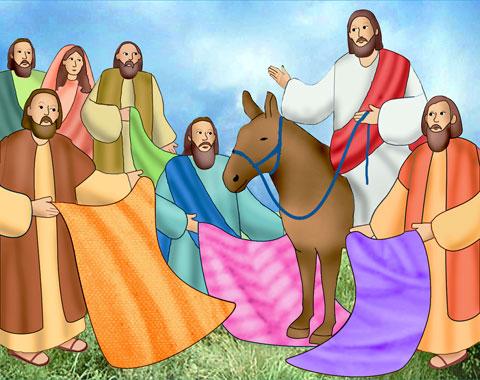 Jesus was traveling with his apostles toward Jerusalem. When they were near Bethphage and Bethany, which was near the Mount of Olives, Jesus sent two of his apostles on an important errand. “Go into the village opposite you,” he told them, “and as you enter it you will find a colt tethered on which no one has ever sat. Untie it and bring it here.”

Jesus could tell his apostles were concerned about taking the colt of someone they did not even know, so he said, “And if anyone should ask you, ‘Why are you untying it?’ you will answer, ‘The Master has need of it.’”

The apostles immediately left to look for the colt that Jesus had told them about. Everything he had told them had come true. They found the colt and men asked them what they were doing. When they told the men why they were taking the colt, the men did not stop them, and they brought the colt to Jesus. The apostles threw their cloaks across the back of the colt, and they helped Jesus to mount it.

As Jesus rode the colt people along the way began to throw their own cloaks on the path in front of him. By the time he reached the Mount of Olives a multitude of people had gathered to watch Jesus. They rejoiced as he passed them and they chanted, “Blessed is the king who comes in the name of the Lord. Peace in heaven and glory in the highest.”

In the crowd along with the happy people were Pharisees who said to Jesus, “Teacher, rebuke your disciples.” They did not want to hear them declaring that Jesus was a king. Jesus replied to them, “I tell you, if they keep silent, the stones will cry out!”

But as Jesus reached Jerusalem, he did not rejoice. Instead he cried and said to his apostles, “If this day you only knew what makes for peace — but now it is hidden from your eyes.”

Jesus entered the city and went to the temple area. He was angry to find people selling things there. He drove them all out saying, “It is written, ‘My house shall be called a house of prayer, but you have made it a den of thieves.” From that time, the chief priests, the scribes and other leaders waited for an opportunity to stop Jesus, even if it meant having him sentenced to death.

1. What did Jesus tell his apostles to do in the village?

2. Why was Jesus angry when he reached the temple?

The Bible is divided into two main sections, the Old Testament and the New Testament. The Old Testament tells us about the lives of the men and women who lived before Jesus, and the New Testament includes narratives of the life of Christ in the Gospels, stories of the lives of the early Christians, and the writings of such important men in our church history such as Peter and Paul. In order to make studying the Bible easier, over the years scholars have divided the books of the Bible into numbered chapters and verses. If we read Luke 19:28, we know that would mean to find the Gospel of Luke, chapter 19, verse 28. Let’s be sure to read our Bible every day.

When he was a young man Guy of Pomposa had a very high opinion of himself and always dressed very well. During a celebration of the feast of St Apollinaris in Italy, he realized that he should change his attitude toward himself in order to improve his life spiritually. He gave his fine clothing to the poor and began to wear the clothes of a poor man. He then spent three years with a hermit, and he became a member and later abbot of a monastery that was under the direction of the hermit. He spent many hours a day praying and fasting, and his life became such an inspiring example that many men joined the monastery. His guidance was sought by many important people over the years. We honor him on March 31. 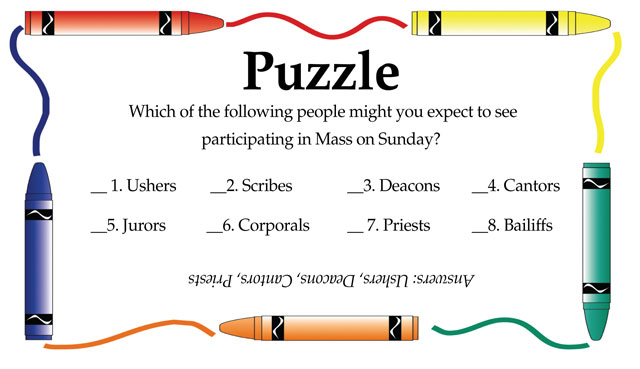