Jesus explains the parable of the sower - Catholic Courier 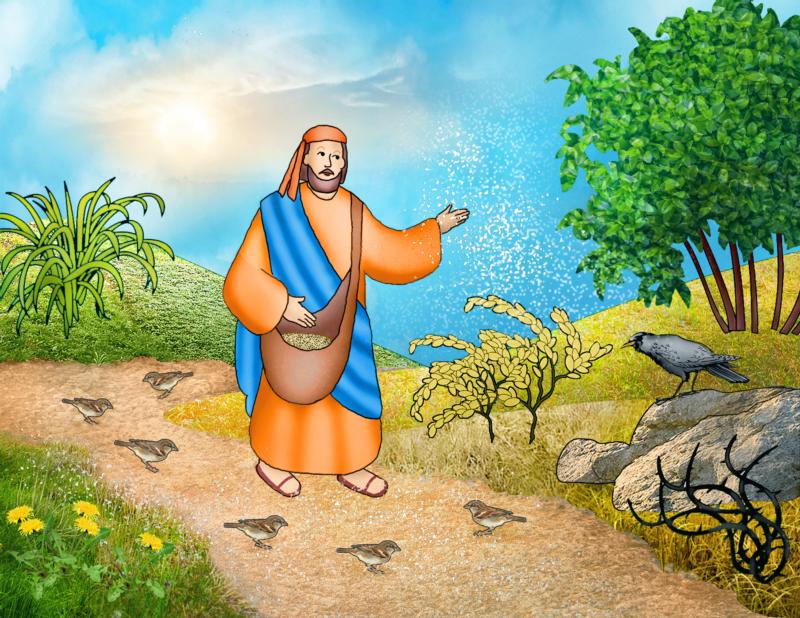 This is the artwork for Kids' Chronicle for July 12, 2020. (Illustration by Linda Rivers)

One day, Jesus walked outside of the house in which he was staying and sat down by the sea.

A huge crowd gathered around him, so he got into a boat and sat down as the people stood on the shore listening.

Jesus began to speak to the crowd in parables. One of the parables was about a man who was sowing seeds.

“A sower went out to sow,” Jesus began. “And as he sowed, some seed fell on the path, and birds came and ate it up.”

Some of the seeds the man was sowing fell on rocky ground where there was little soil.

“It sprang up at once because the soil was not deep, and when the sun rose, it was scorched and it withered for lack of roots,” Jesus said.

And other seeds fell among thorns, and the thorns grew up and choked them.

“But some seed fell on rich soil, and produced fruit, a hundred or sixty or thirtyfold,” Jesus said. “Whoever has ears ought to hear.”

After Jesus finished, he turned to his apostles. He wanted his friends to understand what he had said to the people.

“Hear then the parable of the sower,” he said to the apostles.

Jesus explained that the seed sown on the path represented a person who hears the word of the kingdom of God without understanding it.

“The evil one comes and steals away what was sown in his heart,” he said.

The seed sown on rocky ground represented a person who hears the word and receives it at once with joy, Jesus explained.

“But he has no root and lasts only for a time,” he said. “When some tribulation or persecution comes because of the word, he immediately falls away.”

The seed sown among thorns is like one who hears the word, Jesus noted.

“But then worldly anxiety and the lure of riches choke the word, and it bears no fruit,” he added.

“But the seed sown on rich soil is the one who hears the word and understands it, who indeed bears fruit and yields a hundred or sixty or thirtyfold,” Jesus said.

1. Where did Jesus sit so he could teach the people?

2. To whom did Jesus explain the parable of the sower?

ESSAY: Can you make up your own parable to illustrate a moral or spiritual lesson?

Why did Jesus speak to the people using parables?

“Because knowledge of the mysteries of the kingdom of heaven has been granted to you, but to them it has not been granted,” he explained to the apostles in Matthew 13:10. “To anyone who has, more will be given and he will grow rich; from anyone who has not, even what he has will be taken away.”

Jesus said that the people looked and heard, but they did not see, listen or understand.

He pointed out that this fulfills a prophecy of the prophet Isaiah:

“But blessed are your eyes, because they see,” Jesus told the apostles, “and your ears, because they hear. Amen, I say to you, many prophets and righteous people longed to see what you see but did not see it, and to hear what you hear but did not hear it.”

St. Kunigunde was born in Hungary in 1234. The daughter of royalty, she married King Boleslaus IV of Poland when she was 16.

Both Kunigunde and Boleslaus took vows of celibacy, and they ruled together for 40 years.

Kunigunde generously supported the Friars Minor, the sick and the poor. She also paid the ransoms for Christians who had been captured.

After her husband died, she entered a Poor Clares convent that she had founded in Poland.

Using the hints provided, fill in the blanks with the correct words to complete the sentences from some of Jesus’ parables.