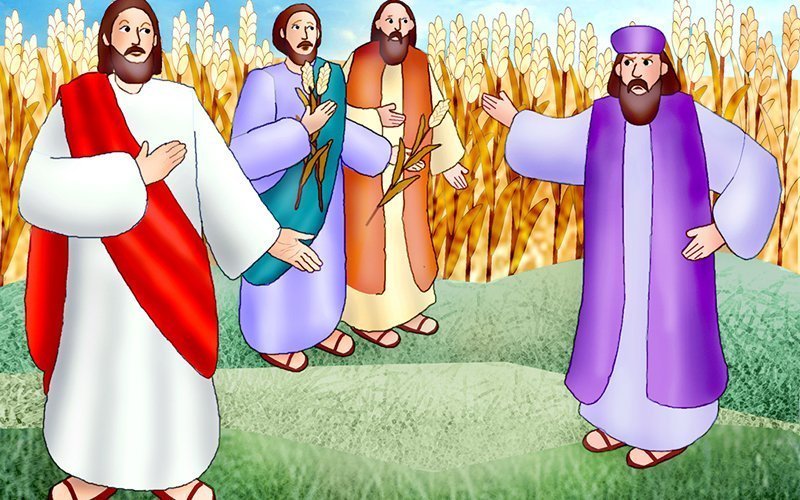 Jesus explains the practice of fasting

Jesus explains the practice of fasting

In spite of the miracles of healing he performed and his wise explanations of the Scriptures, Jesus would occasionally find people who wanted to challenge his words and deeds. Some of them came to Jesus and asked him a question. “Why do the disciples of John and the disciples of the Pharisees fast, but your disciples do not fast?”

The questioners looked at Jesus and at each other. They were not sure exactly what Jesus was trying to tell them. So Jesus gave them another example. “No one sews a piece of unshrunken cloth on an old cloak. If he does, its fullness pulls away, the new from the old, and the tear gets worse. “Likewise, no one pours new wine into old wineskins. Otherwise, the wine will burst the skins, and both the wine and the skins are ruined. Rather, new wine is poured into fresh wineskins.”

With that, Jesus left without saying anything more. But people with questions continued to watch him. As he was walking through a field of grain on the Sabbath day, his disciples made a path by picking the heads of the grain. The Pharisees, who saw this, thought that it violated the law against working on the Sabbath day. So they said to Jesus, “Look, why are they doing what is unlawful on the Sabbath?”

Jesus spoke very plainly to them, using an example from the Scriptures. “Have you never read what David did when he was in need and he and his companions were hungry? How he went into the house of God when Abiathar was high priest and ate the bread of offering that only the priests could lawfully eat, and shared it with his companions?”

Jesus knew that the Pharisees were very familiar with the story of David that was recorded in the writings of Samuel. He continued speaking. “The sabbath was made for man, not man for the sabbath. That is why the Son of Man is lord even of the sabbath.”

READ MORE ABOUT IT:
Mark 2

Q&A
1. Why were the Pharisees angry with the disciples?
2. What did Jesus say about the Sabbath day?

We know about the life and ministry of Jesus from the four Gospels, Matthew, Mark, Luke and John. Jesus set the perfect example for us to follow. He showed love and compassion for everyone he met. He even performed miracles, yet there were people who were jealous of him and wanted to harm him. Jesus died because of his love for us, and he sent the Holy Spirit on the day of Pentecost to help us. He inspired spiritual men to write letters and other records. Some of them have been collected as part of the New Testament. These are the epistles, or letters, of Paul, Peter, James and others. When we have questions about our faith, we can ask our parents, our religious-education teachers and our pastors. God wants us to understand how much he loves us.

Alexander served as the bishop of Alexandria, which is located in northern Egypt. He devoted his life to studying the Scriptures, preaching and caring for the poor.

One of the greatest challenges he encountered was the heresy of a man named Arius, who was teaching lies about the existence of God and the holiness of Jesus. Alexander tried to be nice to Arius and gently correct him, but Arius wouldn’t listen.

The bishop had to call Arius before an assembly of clergymen, similar to a legal hearing. Arius argued with the assembly and was ex com mun icated. A second hearing was held by another council of clergy, and the excommunication was upheld.

The matter was brought before the Council of Nicaea and a representative of Pope St. Silvester. Arius was found guilty of heresy and banished from the empire. This is considered a triumph of the faith of Alexander.