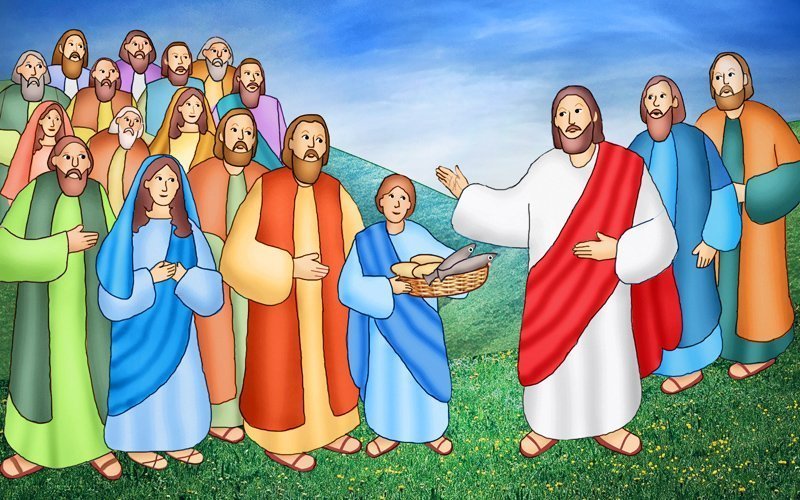 Afterward, he sent them from village to village to proclaim the kingdom of God and to heal those who were ill.

“Take nothing for the journey, neither walking stick, nor sack, nor food, nor money, and let no one take a second tunic,” Jesus told his friends. “Whatever house you enter, stay there and leave from there. And as for those who do not welcome you, when you leave that town, shake the dust from your feet in testimony against them.”

After their travels, the apostles returned to Jesus to tell him all that they had done. Great crowds of people always surrounded Jesus, so he and the apostles quietly withdrew to the town of Bethsaida so they could talk.

But the people figured out where Jesus and his friends were going and followed them.

Jesus did not turn the people away. He talked to them about God and cured all those who were sick.

As the end of the day drew near, the apostles approached Jesus.

“Dismiss the crowd so that they can go to the surrounding villages and farms and find lodging and provisions; for we are in a deserted place here,” they said.

“Give them some food yourselves,” Jesus replied.

“Five loaves and two fish are all we have, unless we ourselves go and buy food for all these people,” they said.

Jesus looked out over the crowd, which contained about 5,000 men.

“Have them sit down in groups of about 50,” he told his friends.

The apostles did what Jesus asked and had everyone sit down.

Jesus then took the five loaves of bread and the two fish. He looked up to heaven and said a blessing over the food. Then he broke up the bread and fish and told his friends to begin feeding the crowd.

Everyone ate until they were satisfied, and the apostles did not run out of food to give. And when the leftover bits of food were gathered, there was enough to fill 12 wicker baskets.

READ MORE ABOUT IT:
Luke 9

Q&A
1. How many loaves and fish did Jesus and his friends have to share with the crowd?

Also in Luke 9, we read about another one of Jesus’ many miracles.

In Luke 9:28-36, we read that Peter, James and John had gone with Jesus to the mountain to pray. During that time, Jesus’ face changed in appearance, and his clothing become dazzling white. Moses and Elijah also had appeared in glory, and a voice from a cloud said, “This is my chosen Son; listen to him.”

In Luke 9:37-43, we read that the next day, when Jesus and his friends came down the mountain, a large crowd greeted them.

A man in the crowd cried out to Jesus.

“Teacher, I beg you, look at my son; he is my only child. For a spirit seizes him and he suddenly screams and it convulses him until he foams at the mouth; it releases him only with difficulty, wearing him out. I begged your disciples to cast it out, but they could not,” the man said.

Jesus looked at the man.

“Bring your son here,” he said.

As the son came forward, the demon threw him to the ground in a convulsion.

Jesus rebuked the unclean spirit. The boy was healed, and Jesus returned him to his father.

All who saw Jesus’ miracle were astonished by the majesty of God.

St. Henry was born in 973 and was the son of the duke of Bavaria. He succeeded his father as duke in 975.

Henry was elected king of Germany in 1002, and in 1014, the pope crowned him holy Roman emperor. Henry was famous for his piety and was viewed as an ideal Christian leader.

He and his wife, St. Cunegund, were avid supporters of Benedictine monasticism, and Henry also wanted to reform and reorganize the church. He founded the see of Bamberg, Germany, and it became known as a center of education and culture.

Using the hints provided, fill in the blanks with the correct words to complete the sentences about miracles.