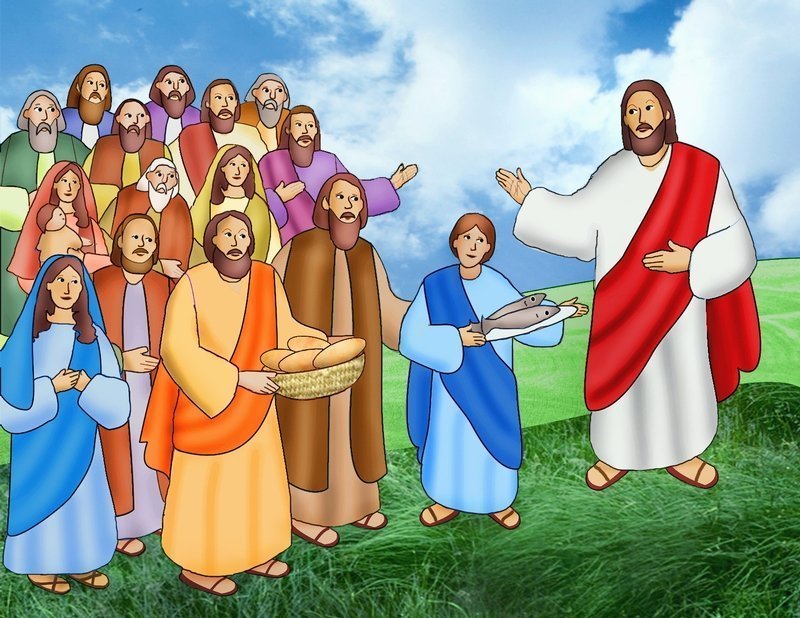 It was almost time for the Jewish feast of Passover. At that time, Jesus and his apostles crossed the Sea of Galilee, and there was a very large crowd waiting for them. The people had heard about Jesus curing the sick, which is why they wanted to follow him.

Jesus went up a mountain and sat there with his apostles. The Lord saw that the large crowd was coming toward them.

He said to one of his apostles, Philip, “Where can we buy enough food for them to eat?”

Even though Jesus asked Philip the question, the Lord already knew what he was going to do.

Philip took a good look at the sea of people. He shook his head and turned toward Jesus.

“Two hundred days’ wages worth of food would not be enough for each of them to have a little (bit),” Philip said.

Just then, Andrew, the brother of Simon Peter, rushed up to Jesus.

“There is a boy here who has five barley loaves and two fish,” he told the Lord, “but what good are these for so many?”

Jesus was very calm and did not look worried.

“Have the people recline,” he told his friends.

Jesus took the five barley loaves and gave thanks. He then handed out the bread to all the men who were seated in the grass. They also were given as much fish as they wanted to eat.

When everyone who had eaten was full and didn’t want any more of the bread and fish, Jesus asked his apostles to clean up.

“Gather the fragments left over, so that nothing will be wasted,” the Lord said.

The apostles did what was asked of them, and they came back with 12 wicker baskets full of leftovers.

The people gathered saw the sign that Jesus had done.

“This is truly the Prophet, the one who is to come into the world,” they said to each other.

Just then, Jesus went to the mountain alone, because he knew if he stayed, the crowd would carry him off and try to make him king.

1. How many loaves did Jesus and his friends have to feed the crowd?

2. About how many men were in the crowd?