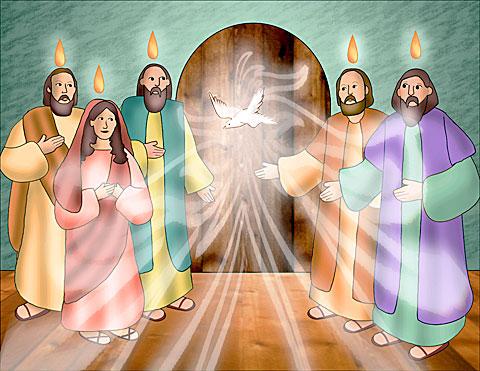 After Jesus had risen from the dead, but before he had ascended into heaven, he told his apostles to wait in Jerusalem for “the promise of the Father about which you have heard me speak; for John baptized with water, but in a few days you will be baptized with the holy Spirit.” The apostles obeyed and they waited in Jerusalem. On the day of celebration of Pentecost the diciples were together praying. Out of a calm sky there was a loud noise, as if a powerful wind was blowing. The wind filled the room. Then tongues of fire appeared in the air above the heads of everyone there. They were then filled with Holy Spirit, and they began to speak in other languages, praising God and rejoicing as the spirit led them.

Jews from all over the world had come to Jerusalem for Pentecost. They were attracted to the noise coming from the building where the apostles were praying. They wanted to know what was happening. And they were amazed by what they heard when they got closer.

Many of them said to each other, “Are not all these people … Galileans? Then how does each of us hear them in his own native language? We are Parthians, Medes, and Elamites, inhabitants of Mesopotamia, Judea and Cappadocia, Pontus and Asia, Phrygia and Pamphylia, Egypt and the districts of Libya near Cyrene, as well as travelers from Rome, both Jews and converts to Judaism, Cretans and Arabs, yet we hear them speaking in our own tongues of the mighty acts of God.”

Others asked, “What does this mean?”

And some, who did not believe, in spite of what they heard, said, “They have had too much new wine.”

At a certain time, Peter stood up along with the other 11 apostles and spoke to the crowd that had gathered. “You who are Jews, indeed all of you staying in Jerusalem. Let this be known to you, and listen to my words. These people are not drunk, as you supposes, for it is only nine o’clock in the morning. “ Then Peter said that they were seeing the fulfillment of one of the prophecies of Joel, when he wrote, “It will come to pass in the lasts days, God says, that I will pour out a portion of my spirit upon all flesh … and it shall be that everyone shall be saved who calls on the name of the Lord.”

READ MORE ABOUT IT:
Acts 2

Q&A
1. Who told the apostles to wait in Jerusalem?
2. Why were so many people visiting Jerusalem?

Lutgardis (1182-1246) was placed in a Benedectine convent when she was 12 years old because her family had lost most of its money in a failed business venture. She did not have any strong desire at first to become a religious member of the convent until she experienced a miraculous event. She saw a vision of the Lord showing her the wounds he received in his hands and his side. He asked her to give her love to him. Lutgardis immediately knew she would devote the rest of her life to serving the Lord. When she prayed, she spoke to him as if he were sitting next to her. God gave Lutgardis gifts of healing and prophecy, and the ability to understand the Scriptures. She prayed often that sinners would be forgiven and would come to know the love of the Lord. We honor her on June 16. 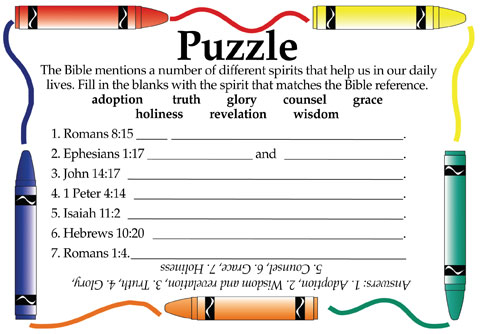