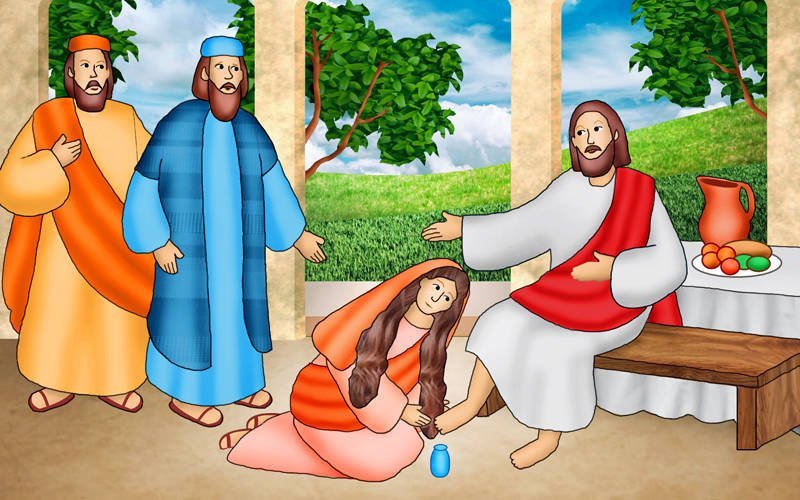 Jesus forgives a sinful woman while dining with a Pharisee

Jesus forgives a sinful woman while dining with a Pharisee

One day, a Pharisee invited Jesus to dine with him. Jesus went to the man’s home and reclined at the table.

A sinful woman who lived in the city learned where Jesus would be dining.

She went to the Pharisee’s house with an alabaster flask of ointment. She stood behind Jesus and wept at his feet,

and she began to bathe his feet with her tears.

The woman then wiped Jesus’ feet with her hair, kissed them and anointed them with the ointment in the alabaster flask.

The Pharisee who had invited Jesus to dine with him watched what the sinful woman was doing.

“If this man were a prophet, he would know who and what sort of woman this is who is touching him, that she is a sinner,” the Pharisee said to himself.

Jesus knew what the Pharisee was thinking.

“Simon, I have something to say to you,” Jesus said to the Pharisee.

“Tell me, teacher,” he replied.

“Two people were in debt to a certain creditor; one owed 500 days’ wages, and the other owed 50,” Jesus said. “Since they were unable to repay the debt, he forgave it for both. Which of them will love him more?”

The Pharisee thought for a moment.

“The one, I suppose, whose larger debt was forgiven,” he said.

Jesus turned to the woman.

“Do you see this woman?” he asked the Pharisee. “When I entered your house, you did not give me water for my feet, but she has bathed them with her tears and wiped them with her hair. You did not give me a kiss, but she has not ceased kissing my feet since the time I entered. You did not anoint my head with oil, but she anointed my feet with ointment. So I tell you, her many sins have been forgiven; hence, she has shown great love. But the one to whom little is forgiven, loves little.”

Jesus spoke to the woman.

“Your sins are forgiven,” he told her.

The others at the table said to themselves, “Who is this who even forgives sins?”

“Your faith has saved you; go in peace,” he said.

1. Who invited Jesus to dine at his house?

2. What did the sinful woman do when she saw Jesus?

ESSAY: How have you demonstrated your thankfulness for being forgiven?

Why was foot washing common in biblical times?

According to JewishEncyclopedia.com, the Israelites wore sandals, so their feet would become dirty and need frequent cleaning. It was customary to wash feet before meals or going to bed.

According to the encyclopedia, foot washing also was a sign of hospitality toward guests: “Among the Israelites it was the first duty of the host to give his guest water for the washing of his feet; to omit this was a sign of marked unfriendliness.”

There are many places in the Bible that describe foot washing.

In Genesis 18, we read that God and two angels appeared to Abraham at the oak of Mamre. When Abraham saw them approaching, he ran to greet them and offered them a meal and water in which to bathe their feet.

In Judges 19, an old man in Gibeah saw a traveler in the town square. He invited the traveler home with him, and the two men washed their feet before eating and drinking.

And in John 13, Jesus washed the apostles’ feet during the Last Supper, giving them — and us — an example to follow of being humble and serving others.

St. Vincent Strambi was born in Italy in 1745. He became a priest, joined the Passionists in 1768 and became bishop of Macerata, Italy, in 1801.

He reformed his diocese and fostered a renewal of worship. He also took care of his priests by building a seminary that hired gifted teachers.

He was forced into exile in 1808 after refusing to swear allegiance to Napoleon. When Napoleon abdicated in 1814, Vincent returned to Macerata, where he continued his reforms. He also helped people during a famine and a typhoid epidemic.

Using the hints provided, put a T next to the sentences about hospitality that are true and an F next to the ones that are false.

___ 4. Don’t neglect hospitality, for through it some have unknowingly entertained angels. (Hebrews 13:2)