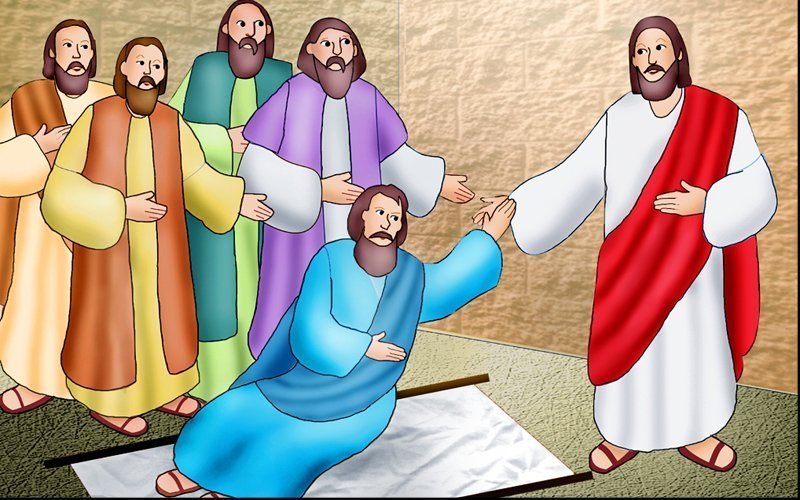 Crowds always gathered around Jesus wherever he went. Most people did not understand how Jesus healed and performed other miracles, but they knew he was special, and they hoped he would help with their needs. After Jesus returned to Capernaum, such a large crowd came to see him that they surrounded the house where he was staying. Rather than try to find a quiet place where he could pray, Jesus preached to the people.

Pushing their way through the crowd were four men who were carrying one of their friends who was paralyzed. The men could not get near the door where Jesus was standing, so they tried a different route. They climbed up onto the roof of the house. They made a hole in the roof that was large enough for the cot their friend was on to fit through. Then they lowered the cot down with ropes.

When Jesus saw the cot coming down into the house, he was impressed by the faith and determination of the men. He said to their paralyzed friend, “Child, your sins are forgiven.”

There were scribes in the crowd who saw what Jesus did and heard what he said. They said to each other, “Why does this man speak that way? He is blaspheming. Who but God alone can forgive sins?”

Jesus knew what the scribes were saying, so he said to them, “Why are you thinking such things in your hearts? Which is easier, to say to the paralytic, ‘Your sins are forgiven,’ or to say, ‘Rise, pick up your mat and walk?’” Jesus paused so the scribes could think about what he had just said. “But that you may know that the Son of Man has authority to forgive sins on earth …” Jesus looked down at the paralytic and said, “I say to you, rise, pick up your mat and go home.” Immediately the crippled man stood up, carried the mat he had been carried in on and headed for home. Everyone who saw what happened was amazed.

Many people praised God for his goodness. Others said, “We have never seen anything like this.”

After that Jesus went to be near the sea. Crowds followed him there as well, and he preached to them, too.

READ MORE ABOUT IT:
Mark 2

Q&A
1. Why did the men climb up on the roof?
2. What did Jesus tell the paralytic to do?

The books that make up the New Testament are a collection of histories, letter, sermons, prayers and prophecies. The authors probably never would have imagined that nearly 2,000 years later Christians would still be reading their words. Many of the letters had to be delivered across long distances by messengers

There was no post office like we have today. Any copies that had to be made were written by hand, and writing materials were not always easy to obtain. Since God wanted his word to be available to us, scholars and rulers preserved our sacred texts, and over the years the Bible was assembled. The Old Testament tells us about the world before Jesus had been born, and the New Testament tells about his life and the lives of the first Christians. We should read our Bibles every day.

Tarasius (d. 806) served as the chief secretary to Emperor Constantine VI and was nominated to become the patriarch of Constantinople. He had access to all the comforts his position provided, yet he chose to live very simply.

After a time when religious images had been forbidden by the empress, Tarasius met with the members of an ecumenical council in Nicea in 787. The council decided religious images would be allowed if the images were not worshiped. Rather, they said, the people portrayed in the images could be honored.

Later in his life, Tarasius refused to consent to the divorce and remarriage of the emperor. The emperor tried many tricks to force Tarasius to change his mind, but he failed. The emperor eventually was replaced by Nicephorus, who allowed Tarasius to live in peace. We honor Tarasius on Feb. 25.