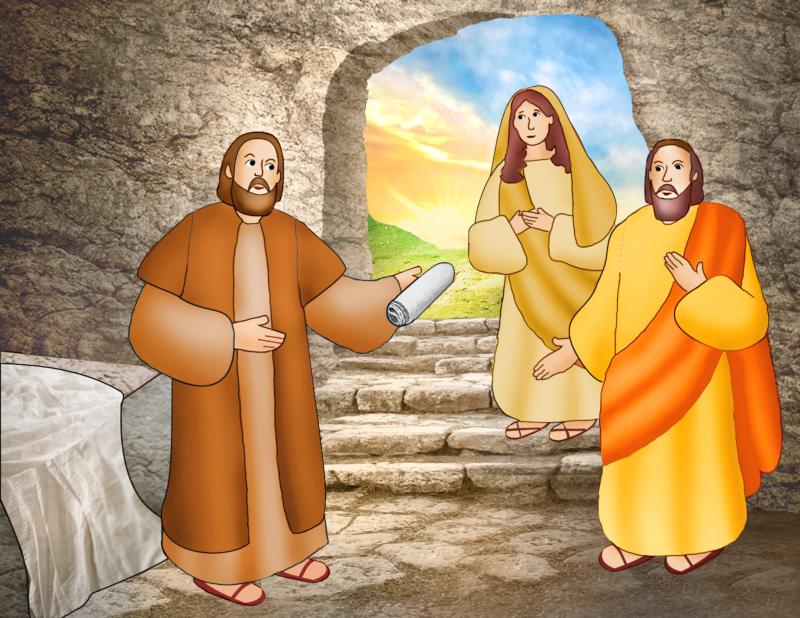 This is the artwork for Kids' Chronicle for April 12, 2020. (Illustration by Linda Rivers)

Jesus had been arrested, condemned to death and died on the cross at Golgotha on what Christians now call Good Friday.

On that day, Joseph of Arimathea, a secret follower of Jesus, took Jesus’ body from the cross for burial.

Joseph and another man, Nicodemus, covered Jesus’ body with spices and burial cloths. They placed Jesus’ body in a new, unused tomb in a garden that was near Golgotha.

On the first day of the week, Mary of Magdala, a follower of Jesus, visited the tomb early in the morning while it was still dark.

When Mary noticed that the stone covering the tomb had been removed, she quickly ran to tell the apostles.

“They have taken the Lord from the tomb, and we don’t know where they put him,” she told Simon Peter and the other apostle whom Jesus loved.

The two apostles raced to the tomb. The other apostle ran faster than Simon Peter and arrived first but did not go in. When Simon Peter arrived, he went into the tomb and saw the burial cloths and the cloth that had covered Jesus’ head.

The other apostle joined Simon Peter, and they both believed that Jesus’ body was gone. The two men returned home, because they did not yet understand that, according to Scripture, Jesus had to rise from the dead.

Mary, however, stayed at the tomb and wept.

As she was crying, Mary bent over into the tomb and saw two angels in white.

“Woman, why are you weeping?” they asked.

“They have taken my Lord, and I don’t know where they laid him,” she replied.

Just then, Mary turned around and saw a man whom she thought was the gardener.

“Sir, if you carried him away, tell me where you laid him, and I will take him,” she said.

Mary suddenly realized that the man was Jesus.

“Stop holding on to me, for I have not yet ascended to the Father,” he told Mary. “But go to my brothers and tell them, ‘I am going to my Father and your Father, to my God and your God.'”

Mary rushed back to the apostles.

“I have seen the Lord,” she said, and gave them the message from Jesus.

2. Whom did Mary mistake Jesus for?

ESSAY: Describe how you would feel if you had encountered the empty tomb and the resurrected Jesus.

We read in John 20 that after Jesus appeared to Mary of Magdala, he appeared to the apostles two times.

In verse 19, we read that the apostles were in a locked room when Jesus came into their midst.

“Peace be with you,” Jesus said.

“Peace be with you. As the Father has sent me, so I send you,” he said.

Jesus breathed on them.

“Receive the Holy Spirit. Whose sins you forgive are forgiven them, and whose sins you retain are retained,” he said.

The apostle Thomas was not there when Jesus appeared, so when he returned to the locked room, he would not believe that his friends had seen Jesus.

About a week later, Jesus again appeared to the apostles. This time, Thomas was present.

“Put your finger here and see my hands, and bring your hand and put it into my side, and do not be unbelieving, but believe,” Jesus told Thomas.

“My Lord and my God!” Thomas exclaimed.

Mark Roy was born in Germany in 1577. He studied philosophy and law, and he eventually opened a law practice in Alsace.

He didn’t like the poor behavior of his fellow attorneys, so he decided to enter religious life. He was ordained a Capuchin priest and took the name Fidelis.

He became known for his holiness, preaching and leadership. After being a superior at several houses, he was invited to become a missionary in Switzerland to call Protestants back to the Catholic Church.

Fidelis’ work was dangerous because people hated the Catholic Habsburgs, a dynasty of European rulers. He was murdered by opponents in 1622, and we remember him on April 24.

Using the hints provided, put a T next to the true statements about the events surrounding Jesus’ passion and an F next to the ones that are false.