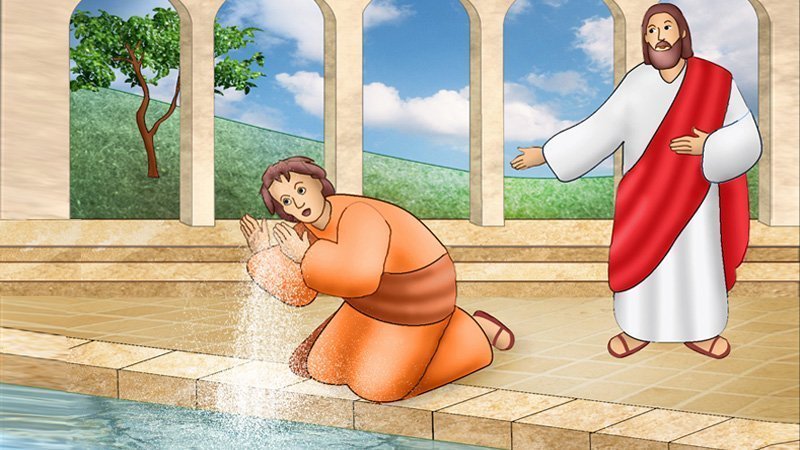 One day Jesus and the apostles came upon a man who had been blind since birth.

The apostles thought the man was blind due to sin.

“Neither he nor his parents sinned; it is so that the works of God might be made visible through him,” Jesus explained. “We have to do the works of the one who sent me while it is day. Night is coming when no one can work. While I am in the world, I am the light of the world.”

Jesus then put a mixture of clay and his own saliva on the man’s eyes and told him to wash himself. Afterward, the man was able to see.

The man told everyone who asked him exactly how he had gained his sight.

He was then brought before the Pharisees to tell his story. Some of them did not think Jesus was from God because he cured the man on the Sabbath instead of resting.

But some of the others argued that a sinful person could not do such miracles.

The Pharisees talked to the man’s parents, who confirmed the man was their son who had been born blind. They were afraid to say more, because they did not want to be thrown out of the synagogue for saying Jesus was the Messiah.

So the Pharisees again called the man before them and asked how he gained his sight.

The Pharisees made fun of him, saying that they were disciples of Moses, not Jesus. They still did not believe Jesus came from God.

“It is unheard of that anyone ever opened the eyes of a person born blind. If this man were not from God, he would not be able to do anything,” the man said.

The Pharisees became angry and threw him out of the synagogue.

When Jesus heard what happened, he went to talk to the man.

“Do you believe in the Son of Man?” Jesus asked.

“Who is he, sir, that I may believe in him?” the man replied.

“You have seen him, the one speaking with you is he,” Jesus answered.

The man looked at Jesus.

“I do believe, Lord,” he said, and he worshiped Jesus.

1. What did the apostles think caused the man’s blindness?

2. Why did the Pharisees refuse to believe what happened?