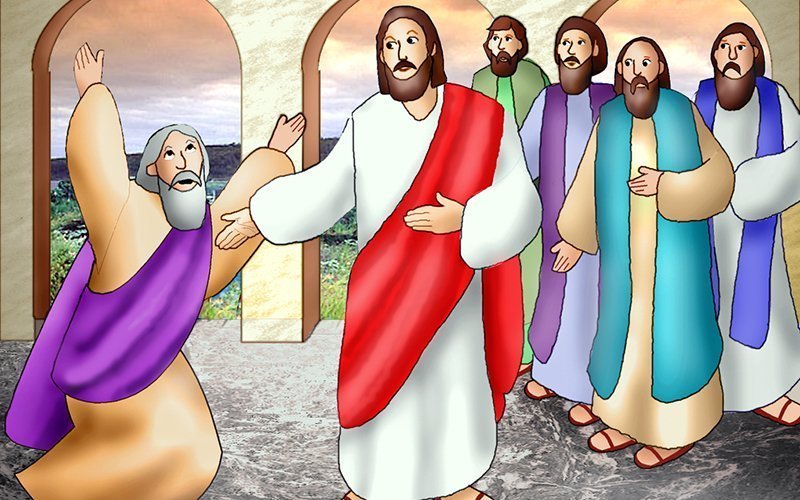 Bible Accent: Apostles in the Gospel

After John the Baptist had been arrested, Jesus went to Galilee to proclaim the gospel of God. “This is the time of fulfillment,” he said. “The kingdom of God is at hand. Repent, and believe in the gospel.”

Jesus wanted men he could depend on to travel with him and to help him carry out his work. He saw two fishermen casting their nets into the Sea of Galilee. One was named Simon, the other was his brother Andrew.

Jesus called out to them. “Come after me, and I will make you fishers of men.” The two men immediately left their work and went with Jesus. Jesus continued walking and saw two other brothers, also fishermen, who were in a boat mending a net. When Jesus called them, they, too, left their work to follow him.

Jesus and his new disciples went to Capernaum, where Jesus taught in the synagogue on the Sabbath day. Jesus spoke with such wisdom and authority, that everyone who heard him was amazed.

In the synagogue was a man who had an unclean spirit. “What have you to do with us, Jesus of Nazareth,” the man said. “Have you come to destroy us? I know who you are — the Holy One of God!” Jesus looked at the man and said, “Quiet! Come out of him.” The unclean spirit drove the man into convulsions and came out of him with a loud scream. The people who witnessed this questioned each other. “What is this? A new teaching with authority. He commands even the unclean spirits and they obey him.” This story quickly spread throughout the region of Galilee. But Jesus did not stop with this miracle. He went to the home of Simon’s mother-in-law and healed her of a serious fever. Later that evening, many people came to Jesus asking for healing and deliverance. He healed people who were sick of many different diseases, and he cast out many other unclean spirits. Jesus commanded the unclean spirits not to speak, because they knew who Jesus was.

After that Jesus would rise before the sun came up so he could be alone to pray. Simon found Jesus and told him, “Everyone is looking for you.” So Jesus answered, “Let us go on to the nearby villages that I may preach there also. For this purpose have I come.” And Jesus kept his word, preaching, healing people and casting out unclean spirits.

READ MORE ABOUT IT: Mark 1

Q&A
1. What did Jesus say about the Kingdom of God?
2. Why did Jesus want to be alone?

Bible Accent: Apostles in the Gospel

The four Gospels tell us about the life of Jesus, from his birth in Bethlehem to his death on his cross to his Resurrection and Ascension. We also read about a group of men that Jesus chose to be his closest friends, the 12 Apostles. These men often went with Jesus as he traveled and preached. Peter, a fisherman by trade, was an important leader of the early Christians. He preached on the day of Pentecost and wrote three letters which are part of the New Testament. John, wrote one of the Gospels and the Book of Revelation. Matthew was a tax collector, not a person who would have been liked by the people of Jesus’ day. He left his business to follow Jesus. He recorded the genealogy, or family tree, of Jesus in his Gospel. We may never be as famous as these men, but we can be disciples of Jesus today by obeying his commandments and being kind to the people around us.

Mucian Wiaux (1841-1917) was an ordinary man who dedicated his life to God, to prayer and to his students. His parents were very religious and Mucian was inspired by their example. He studied under the Brothers of the Christian Schools and went on to college in Malonne. He then taught there for the remainder of his career. He was assigned tasks that carried little responsibilities, such as supervising the play areas and ringing the school bell. His superiors did not regard him as a skilled teacher. Yet, because of his compassion for others and his dedication to the Lord, his life was a great example of holiness. He was described as having “the skill of bringing even the least gifted to the limit of their abilities.” At Mucian’s canonization in 1989, Pope John Paul II called him “the light of Belgium and the glory of his congregation.” We honor him on Jan. 30.