Jesus is arrested as the King of the Jews - Catholic Courier 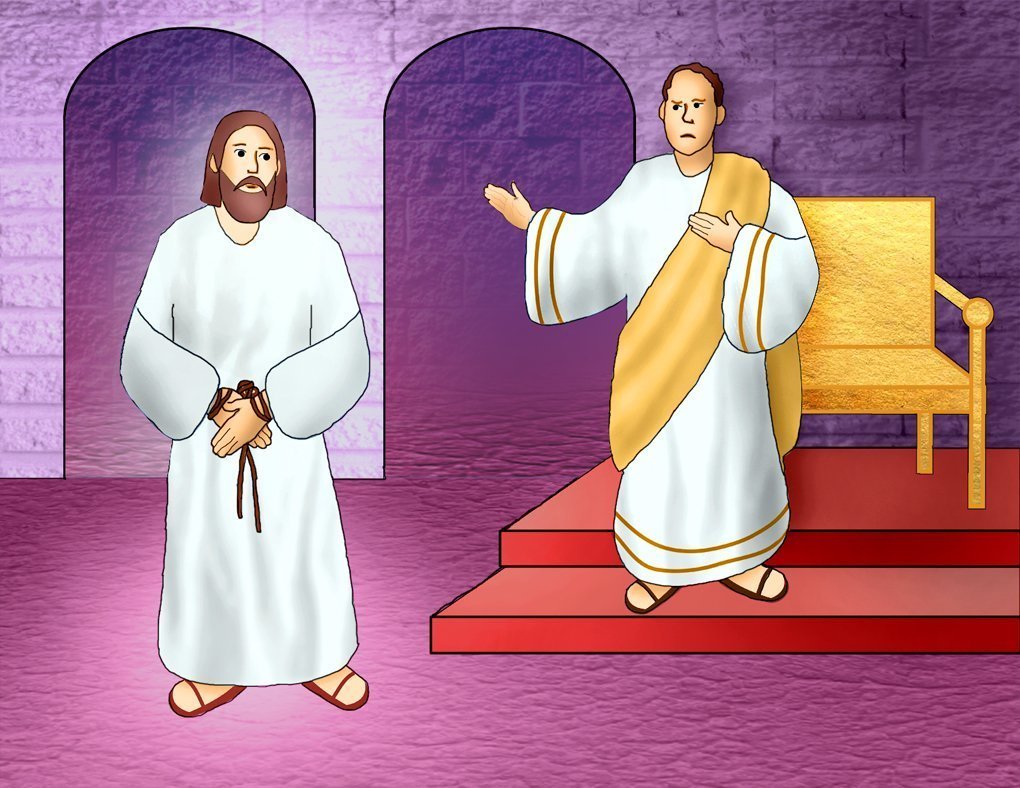 Jesus is arrested as the King of the Jews

Jesus is arrested as the King of the Jews

Jesus had been praying in the garden that was a favorite place for him and his disciples when they wanted to be away from the crowds. But the solitude was interrupted when Judas, one of Jesus’ disciples, arrived with soldiers and guards sent by the Pharisees and the chief priests. Because it was late at night, some of the men carried torches. Others carried weapons. Jesus asked, “Whom are you looking for?”

“Jesus the Nazorean,” one of them answered.

Peter, who was with Jesus, wanted to protect him, so he pulled out a sword and swung it at one of the soldiers, cutting off his ear.

Jesus said to him, “Put your sword into its scabbard. Shall I not drink the cup that the Father gave me?” Then Jesus allowed the guards to put him under arrest. First they brought him before Annas, the high priest, who sent him on to Caiaphas. And Caiaphas sent him on to Pilate.

By then it was morning. Pilate asked the men who had brought Jesus, “What charge do you bring (against) this man?”

A spokesman answered, “If he were not a criminal, we would not have handed him over to you.”

Pilate then asked Jesus, “Are you the King of the Jews?”

Jesus looked at the people who had brought him in, and then he said to Pilate, “Do you say this on your own or have others told you about me?” Pilate shrugged his shoulders and said, “I am not a Jew, am I? Your own nation and the chief priests handed you over to me. What have you done?”

Pilate asked a different question. “Then you are a king?”

“You say I am a king. For this I was born and for this I came into the world, to testify to the truth.”

Pilate looked at Jesus and asked, “What is truth?” Then Pilate said to the people who had accused Jesus, “I find no guilt in him. … Do you want me to release to you the King of the Jews?”

But the answer was, “Not this one but Barabbas!”

READ MORE ABOUT IT:
John 18

Q&A
1. What did Jesus tell Peter to do with his sword?
2. Why did Jesus say he was born?

The last Sunday of the church year honors Christ as king. When he taught, he often spoke of the Kingdom of God or the Kingdom of Heaven. Jesus said that this kingdom would be revealed soon, and that people should pray for it to happen. We continue to obey Jesus when we say, “Thy kingdom come,” in the Lord’s prayer.

The apostle Paul warned people that if they continued to disobey the Lord’s commandments, they would not be able to enter the kingdom.

As part of his revelation, John said the kingdom of God would come with salvation and power and the authority of God’s anointed.

Let us remember that Christ is our king, and pray that we will be with him in the kingdom of God.

Cuthbert Mayne (1544-77) received his early religious education from his uncle, a Protestant. He became an ordained minister before his 20th birthday, and then entered Oxford University in England.

Two of his professors there joined a Catholic seminary in Douai, France. They wanted Cuthbert to join them. He was finally convinced by their persistent letters, and he converted to Catholicism and joined them. Three years later, he was ordained as a priest with a degree in theology. One of his first assignments was as the estate steward in a parish in Cornwall. Cuthbert was arrested by the sheriff for the illegal act of having graduated from a seminary that was not recognized by English law. He was thrown into a prison, secured with heavy chains.

As a warning to others who might follow his example, Cuthbert was sentenced to death. He was offered a reversal of his sentence if he denounced his faith, but he refused to do so.