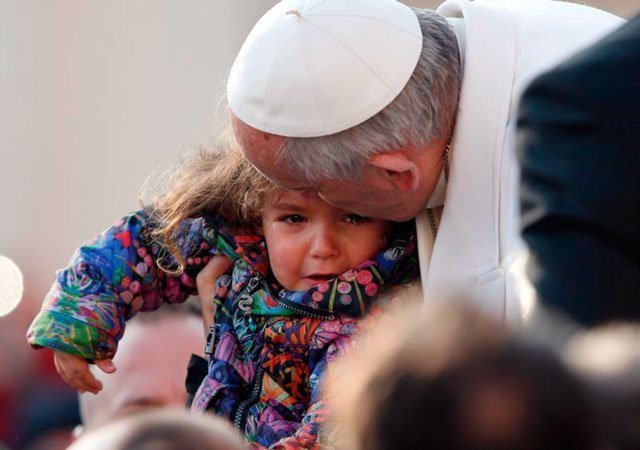 Pope Francis kisses a crying child during his general audience in St. Peter's Square at the Vatican Dec. 16.
By Junno Arocho Esteves
Catholic News Service
VATICAN CITY (CNS) — Pilgrims must beware of people who seek to use the Jubilee Year to profit off of them since salvation is a gift that cannot be bought, Pope Francis said.
"Be careful! Beware of someone who is sly or sneaky who tells you that you need to pay. Salvation cannot be paid for, salvation cannot be bought. Jesus is the door and Jesus is free of charge," the pope said Dec. 16 during his weekly general audience.
The pope’s warning comes one day after Rome’s financial police seized fake parchments — worth an estimated 70,000 euros — that were sold at a souvenir shop near the Vatican, according to a report by The Associated Press Dec. 14. AP said police seized 3,500 parchments being passed off as apostolic blessings that commemorate marriages, baptisms and Holy Year pilgrimages.
Prior to the start of the Jubilee Year, Archbishop Rino Fisichella, president of the Pontifical Council for the Promotion of the New Evangelization, said pilgrims must be vigilant not only of terrorist threats but also of scam artists who see the Holy Year as "a source of income."
"It’s not just about security for fear of ISIS. There has to be security to watch out for people’s dignity," he told journalists Dec. 4.
During his address, Pope Francis expressed his hope that the Holy Year celebrations in dioceses across the globe would serve as "a visible sign of universal communion" and of God’s love and mercy to the world.
Noting that the start of the Holy Year coincides with the 50th anniversary of the conclusion of the Second Vatican Council, the pope said that the council highlighted this "mystery of communion" among the churches worldwide.
"Although spread throughout the world and divided into many particular churches, it has always been the one and only church that Jesus Christ wanted and for whom he offered himself," he said.
The Holy Door is a symbol of Jesus Christ, he said, and pilgrims who pass through it in Rome and in churches around the world make a visible sign of trust in him "who did not come to judge but to save."
"It is a sign of a true conversion of the heart," the pope said. "When we pass through that door, it is good to remember that we should also open wide the doors of our heart."
Confession, he continued, is another important aspect of the Holy Year that gives the faithful the opportunity to have "a direct experience" of mercy.
However, one must first recognize their sins and also forgive others in order to fully experience God’s love and forgiveness.
"When we recognize our sins and ask forgiveness, there is a celebration in heaven; Jesus celebrates," Pope Francis said. "This is his mercy; do not be discouraged, go forward."
Before the start of the audience, pilgrims sang "Happy Birthday" to the pope who will celebrate his 79th birthday Dec. 17. As he made his way to the stage, veteran Mexican journalist, Valentina Alazraki, presented Pope Francis with a sombrero-shaped birthday cake on behalf of the Mexican people.
– – –
Follow Arocho on Twitter: @arochoju.
Copyright © 2023 Catholic News Service, Inc. All rights reserved. Linking is encouraged, but republishing or redistributing, including by framing or similar means, without the publisher's prior written permission is prohibited.