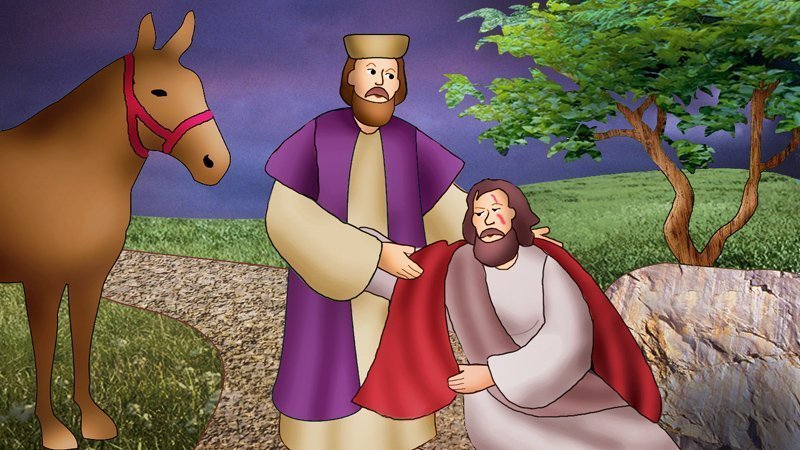 Jesus’ parable shows how the good Samaritan loved his neighbor

Bible Accent: Who were the Samaritans?

Puzzle: Fill in the missing words

Jesus’ parable shows how the good Samaritan loved his neighbor

The Pharisees did not like Jesus. They were always trying to trick him into saying something wrong about God so they could tell the people not to listen to him.

One day, a scholar of the law decided to test Jesus. He stood up when Jesus was teaching the people and asked him a question.

“Teacher,” he asked, “what must I do to inherit eternal life?”

Jesus looked at the man. He knew the man was trying to trick him.

“What is written in the law?” Jesus asked in reply. “How do you read it?”

The scholar of the law answered that you must love God with all of your heart, being, strength and mind, and also love your neighbor as yourself.

Jesus told the man that he had answered correctly.

“Do this and you will live,” Jesus said.

The scholar knew Jesus has bested him, but he had one more trick up his sleeve.

“And who is my neighbor?” he asked.

Jesus answered by telling a parable.

A Jewish man traveling from Jerusalem to Jericho was robbed, beaten and left for dead.

A priest came down the road afterward and saw the man. Instead of stopping to help, the priest went to the opposite side of the road and passed by.

A little while later, a Levite came down the road. He did not stop to help the robbery victim but crossed to the opposite side of the road and passed him by.

Then a Samaritan came down the road. Jews and Samaritans hated each other and did not associate at all. Even so, the Samaritan had compassion for the man and stopped to help him.

The Samaritan bandaged the man’s wounds, lifted him up onto his animal and took him to an inn to care for him. When the Samaritan had to leave, he paid the innkeeper to take care of the man until he could return.

After Jesus finished his parable, he asked the scholar of the law a question.

“Which of these three, in your opinion, was neighbor to the robbers’ victim?” he asked.

“The one who treated him with mercy,” the scholar of the law replied.

Jesus nodded his head in approval.

“Go and do likewise,” he said.

1. Who asked Jesus a tricky question?

2. Who helped the man who had been robbed?

Bible Accent: Who were the Samaritans?

The Bible mentions the Samaritans in several places. Who were they, and why did the Jews hate them?

At one time, the kingdom of Israel was split in two. The northern kingdom, whose capital was Samaria, was conquered by the Assyrians. The Assyrians forced the 10 tribes to scatter throughout their empire, and various pagan tribes moved into Samaria.

In 2 Kings 17, we read that God sent lions to attack and kill some of the pagans for not worshipping him. So the Assyrian king sent a captive Israelite priest to Samaria to teach the people to worship God in addition to the pagan gods.

The pagans intermarried with the Israelites who were not taken to Babylon, and these people became the Samaritans.

When the Israelites returned home after the Babylonian exile, they rejected the Samaritans and did not want to associate with them because they did not follow all of Judaism and originally had worshipped pagan gods. This upset the Samaritans, who then tried to cause problems for the Israelites.

Hostility continued to grow between the two groups over the centuries and continued throughout biblical times.

Edward the Confessor was the king of England from 1042 to 1066. He was a very holy person who was generous to the poor and an able ruler. Edward took good care of his people. He protected them from outside enemies, and he protected himself from those in the country who opposed his rule. England was a peaceful and prosperous place during his reign. He also became known for his miracles. One time, the water in which he washed his hands was said to have cured people from epilepsy and skin diseases. For a long time after his death in 1066, Edward was one of the patron saints of England. We remember him on Oct. 13.

Puzzle: Fill in the missing words 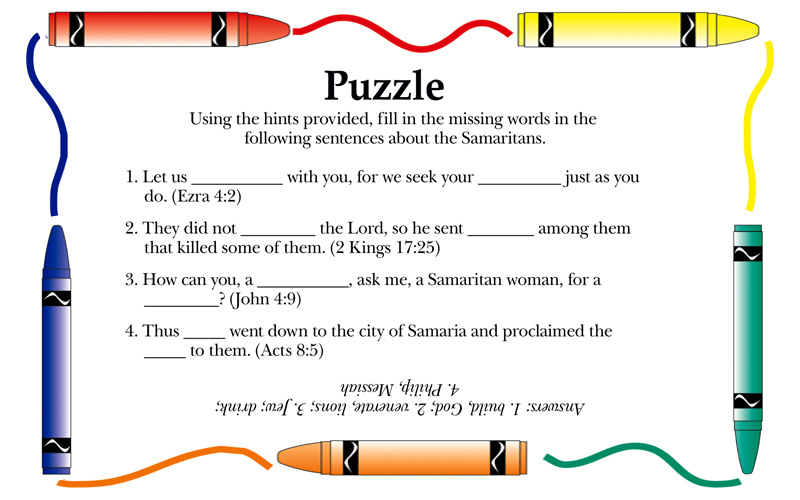 The essay question for October 2017 is: How do you show that you love your neighbor?

All entries of 100 words or less must be received by the Catholic Courier no later than 4:30 p.m. on Oct. 18, 2017, to be considered for this contest. The winner, whose essay will be published in an upcoming print and online edition of Kids’ Chronicle, will be notified by phone.