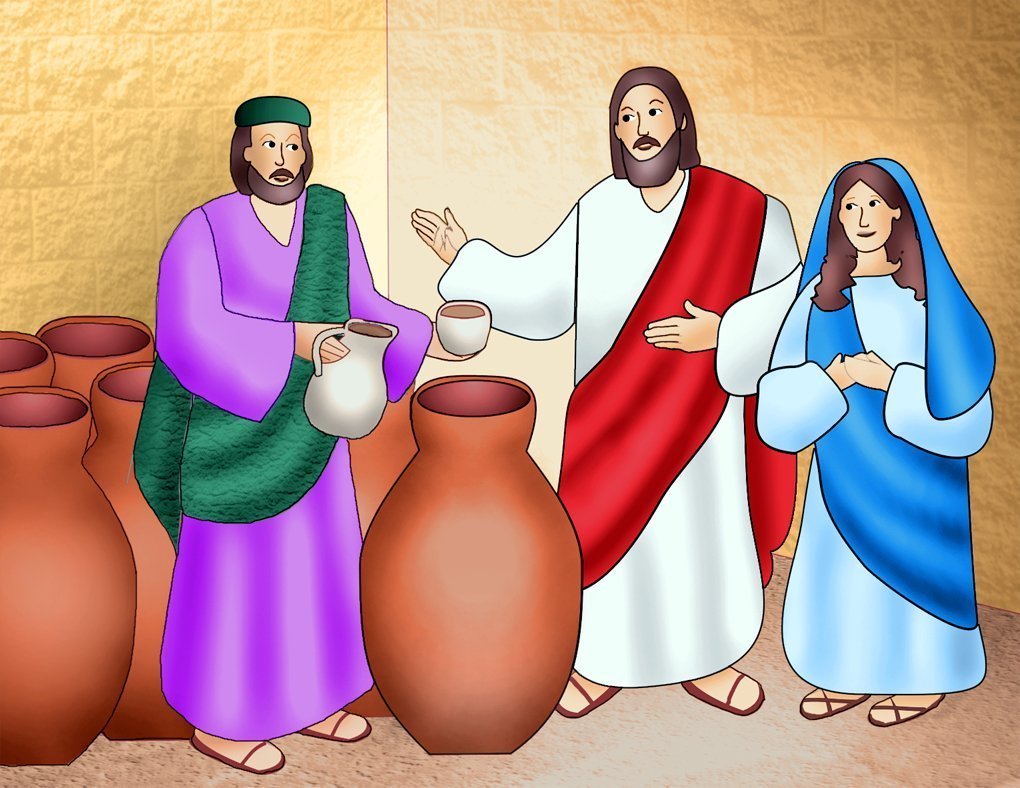 Today was a day of happiness and love. Two friends of Jesus were getting married in Cana, which was in Galilee. Jesus, his mother and his disciples were invited. They visited with some people they had not seen in a long time.

A situation arose which might have caused great embarrassment to the groom and his family. Mary, the mother of Jesus, had heard the groom talking with his servants, and she thought perhaps Jesus would be able to help. Mary whispered into Jesus’ ear. “They have no wine.”

Jesus, who had been talking to some of his friends, turned to her and replied, “Woman, how does your concern affect me? My hour has not yet come.” Even though Jesus seemed uninterested in the fact that the host of the wedding was almost out of wine, she knew her son would help. She waved her hands toward the servants. When the servants came over to her, Mary said, “Do whatever he tells you.”

In one section of the room were six 20-gallon jars of water that were used for ceremonial washings. Jesus pointed at them and told the servants, “Fill the jars with water.” The servants took the jars out to the well and filled them to the brim. Each full jar was very heavy, and two servants were needed to carry each one.

The servants watched as the headwaiter tasted the new wine. They did not tell him where the wine had come from. The headwaiter asked one of the servants to bring the bridegroom to the kitchen.

When the groom arrived, the headwaiter said to him, “Everyone serves good wine first, and then when people have drunk freely, an inferior one, but you have kept the good wine until now.”

This was the first miracle performed by Jesus, the first of many signs that would reveal his glory, and his disciples began to believe in him from this point on.

Q&A
1. What did Mary tell Jesus?
2. What happened to the water in the jars?

The story where Jesus changed water into wine is his first recorded miracle. Jesus taught us that to love each other is the most important commandment, so it is not surprising that the setting for this miracle took place at a wedding. Marriage is one of our seven sacraments, and it is an expression of love by a man and a woman for each other.

When God placed Adam in the garden of Eden, he did not want him to be alone, so he created Eve. God wants us to love everyone, not just our close friends and family, and that is not always easy. It’s hard to love someone who teases us in school or who is mean to us, so we should pray that God helps us when we’re in difficult situations like those. He loves us, and we should love him in return.

Hilary was born in France, converted to the faith and became a bishop. When Emperor Constantius wanted all bishops to condemn St. Athanasius, Hilary wrote him a letter asking instead for him to let the church be in peace. He continued to write letters and religious books, such as his thoughts on the Gospel of Matthew and the Psalms, an explanation of the Trinity and many hymns.

When Constantius again persecuted the church and its leaders, Hilary wrote another long letter to him in the church’s defense. Hilary persevered against the emperor’s criticisms of the church and was able to restore a sense of order, peace and discipline.