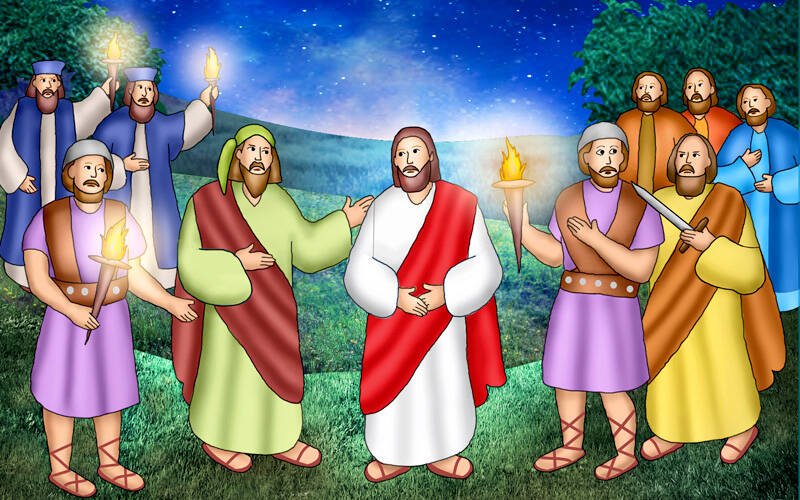 Jesus shared one last Passover meal with the apostles before he was crucified.

When the time came to eat, he took a cup and gave thanks.

“Take this and share it among yourselves; for I tell you that from this time on I shall not drink of the fruit of the vine until the kingdom of God comes,” he said.

Then he took the bread, said the blessing, broke it and gave it to them.

“This is my body, which will be given for you; do this in memory of me,” he said.

Then he took the cup in the same manner.

“This cup is the new covenant in my blood, which will be shed for you,” he said.

Jesus explained to his friends that the person who would betray him was at the table. The apostles began to debate who among them would do such a deed.

After the Passover meal, Jesus and his friends went to the Mount of Olives.

“Pray that you may not undergo the test,” he said.

Jesus withdrew from his friends and knelt about a stone’s throw away. He began to pray.

“Father, if you are willing, take this cup away from me; still, not my will but yours be done,” he said.

Jesus was in such agony and he was praying so hard that his sweat became like drops of blood falling to the ground. An angel from heaven appeared to him to strengthen him.

When he had finished praying, he rose and returned to the apostles. He found them sleeping from grief.

“Why are you sleeping?” he asked. “Get up and pray that you may not undergo the test.”

While Jesus was still speaking, a crowd approached. At the head of the crowd was the apostle Judas, who went up to Jesus and kissed him.

“Judas, are you betraying the son of man with a kiss?” Jesus asked.

When the apostles realized what was happening, they asked whether they should strike with a sword. One of them struck the high priest’s servant and cut off his right ear.

“Stop, no more of this!” Jesus said as he touched the servant’s ear and healed him.

The chief priests, elders and temple guards in the crowd led Jesus to the high priest’s house after arresting him.

1. Where did Jesus pray?

2. Who betrayed Jesus with a kiss?

ESSAY: Describe a time when you have felt betrayed by someone.

Before entering Jerusalem to eat the Passover meal with the apostles, Jesus stopped at the Mount of Olives.

In Luke 19, we read that Jesus and the apostles were traveling to Jerusalem and were drawing near to Bethphage and Bethany.

At the Mount of Olives, Jesus sent two of the apostles on a mission.

“Go into the village opposite you, and as you enter it, you will find a colt tethered on which no one has ever sat,” he said. “Untie it and bring it here. And if anyone should ask you, ‘Why are you untying it?’ you will answer, ‘The Master has need of it.’”

The apostles went off and found everything just as he had told them. When the owners of the colt saw them untying the animal, they explained that the master had need of it.

They brought the colt to Jesus. They threw their cloaks over the animal and helped Jesus to climb onto its back.

As Jesus rode toward Jerusalem, the people spread their cloaks on the road. As he approached the slope of the Mount of Olives, the people began to praise God aloud with joy for all the mighty deeds they had seen.

“Blessed is the king who comes in the name of the Lord. Peace in heaven and glory in the highest,” they said.

St. Zita was born in Italy around 1218. At age 12, she began working as a servant for a wealthy weaver in Lucca, Italy. She remained there for the rest of her life.

Zita was very devout. At first, she would get into trouble for giving lavish gifts of food to the poor, but her goodness gradually won everyone over. Eventually, she was put in charge of the entire household.

Later in life, she spent a lot of time visiting the sick and imprisoned. She died in 1278, and we remember her on April 27.

Answers: you, why, sleeping, are

Why are you sleeping?