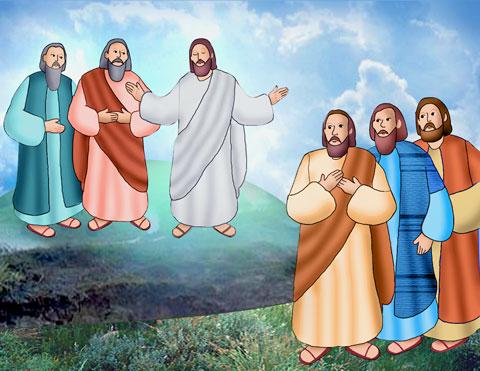 Jesus tried to explain to his disciples that he would only be with them a short time, and then he would be gone. While he was here, there were certain things that would happen to him, and he wanted to prepare his friends. “The Son of Man,” he told them, “must suffer greatly and be rejected by the elders, the chief priests, and the scribe, and be killed and on the third day be raised.”

Jesus also wanted his disciples to know about the commitment it would take on their part to be one of his followers. “If anyone wishes to come after me, he must deny himself and take up his cross daily and follow me.”

After a week had passed, Jesus was alone with his apostles Peter, James and John, who were three of his closest friends.

He asked them to accompany him when he went up to a quiet place on the mountain to pray. As Jesus was praying the apostles saw a change come over Jesus. His face looked different and his clothes looked as if they were giving off a bright, white light. And two men appeared with Jesus, who began to speak with him. They were Moses and Elijah, and they told Jesus about the many things they knew he was going to perform and complete in Jerusalem.

Peter, James and John each saw what was happening, so they knew they were not dreaming. They did not know what they should do in the presence of such a holy event, but they felt they should offer to do something.

So before Moses and Elijah departed, Peter said to Jesus, “Master, it is good that we are here; let us make three tents, one for you, one for Moses and one for Elijah.”

As Peter was speaking to Jesus, a dense cloud formed over their heads and a dark shadow fell upon the apostles. Then the cloud settled and completely engulfed them. The men were filled with fear. Out of the mist of the cloud, a voice declared, “This is my chosen Son; listen to him.”

Before the three men could react, the cloud was gone, and they were once again with Jesus. He was no longer changed, and Moses and Elijah were no longer with him.

Peter, James and John did not speak to Jesus about what had happened, and they did not tell anyone else what they had seen.

The event in today’s story is called the transfiguration because the appearance of Jesus was changed in front of the three apostles who were with him. Bible scholars consider this an unusual miracle because it wasn’t something Jesus performed; it happened to him. Moses and Elijah were very important in the Jewish tradition, and they were there with Jesus. Symbolically this may represent the words of Jesus from the Gospel of Matthew (5:17), where he said he had come to fulfill the law (Moses, the giver of the law) and the prophets (Elijah, whom the Jews believed would return). Peter wanted to honor the patriarchs as well as Jesus, but the voice said that Jesus was God’s Son, and to listen to him. We should listen to him as well. 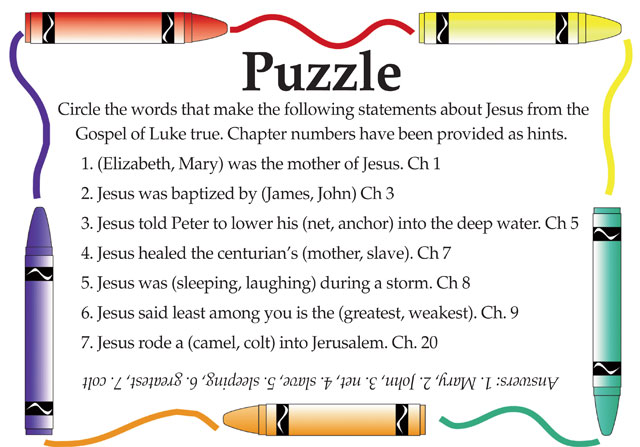