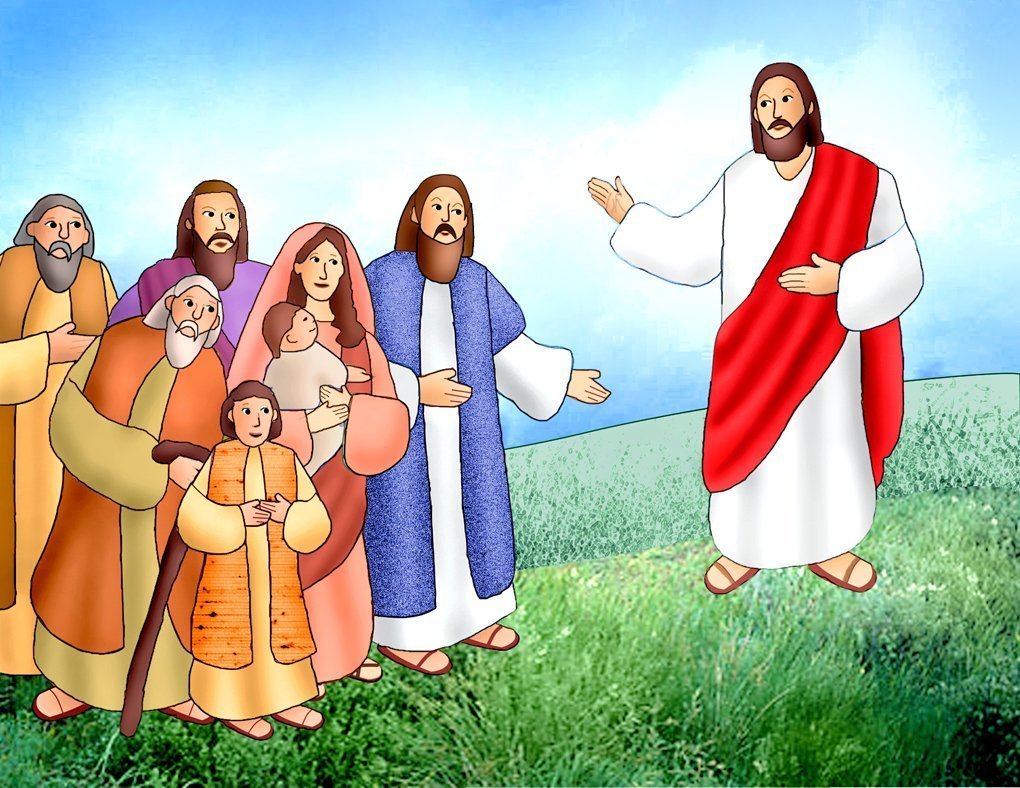 Jesus preaches about the Beatitudes

Jesus preaches about the Beatitudes

Jesus chose 12 men who would go with him as he preached and performed miracles. He would share with them the secrets of the kingdom of God, so they would be able to carry on his work after he had returned to heaven. He called these men his Apostles, and their names were Peter, Andrew, James, John, Philip, Bartholomew, Matthew, Thomas, James, Thaddeus, Simon the Zealot and Judas Iscariot.

Jesus was walking with his disciples one day when they reached large plot of level, grassy land. A huge crowd of people who wanted to hear Jesus preach or heal someone they loved had gathered there. They had come from Judea and Jerusalem, Tyre and Sidon. They wanted to be able to touch the robe Jesus was wearing, because they knew even that would heal them. And Jesus healed everyone who was there.

Then he said to them, “Blessed are you when people hate you, and when they exclude and insult you, and denounce your name as evil on account of the Son of Man. Rejoice and leap for joy on that day! Behold, your reward will be great in heaven. For their ancestors treated the prophets in the same way. “Jesus stopped speaking again. Some people were laughing, others seemed confused. Children in the back were playing, and their parents were trying to keep them quiet so everyone could hear what Jesus was saying. Jesus had a few more things to say. “Woe to you who are rich, for you have received your consolation. Woe to you who are filled now, for you will be hungry. Woe to you who laugh now, for you will grieve and weep.” Then Jesus said the most astounding thing of all. “But to you who hear, I say, love your enemies, do good to those who hate you, bless those you curse you, pray for those who mistreat you.”

READ MORE ABOUT IT:
Luke 6

Q&A
1. How many men did Jesus choose as his Apostles?
2. What did Jesus say about enemies?

Saul, the first king of Israel, did not please God in his reign as king. He was popular with the Israelites because he had been a successful military leader. David became the next king of Israel. His rise was not as a military leader. Instead he was a young boy who spent most of his time watching over his father’s sheep. This is probably not a coincidence, because later Jesus referred to himself as “the good shepherd.”

David obeyed God and, as a young boy, killed Goliath the giant with nothing but a sling shot and a few stones. Saul offered his armor to him, but it was too heavy for the boy. He faced the enemy that brought fear to the entire army of Israel with no armor at all, only his faith in God.

David’s son, Solomon, was the next king. He pleased God by asking for wisdom instead of riches.

Let us pray for the world’s leaders of today.

Meletius (d. 381) came from a well-respected Armenian family. He was a kind, gentle man who was loved by Christians and non-Christians alike. He was appointed bishop of Sebastea, but he encountered so much political opposition, he retired and, after spending quiet time in the desert, moved to Syria.

In spite of trying to lead a quiet life, Meletius found himself in the middle of a dispute between the Arians and Catholics. The emperor appointed him as the bishop of Antioch.

When Meletius explained a passage from the Book of Proverbs according to the teachings of the Catholic church, the other groups were angry and demanded he be removed from his post.

After the death of the emperor, some of the political turmoil ended and in 381, Meletius was part of the second ecumenical council in Constantinople. He died before the council concluded its business.