Jesus raises a child from the dead - Catholic Courier 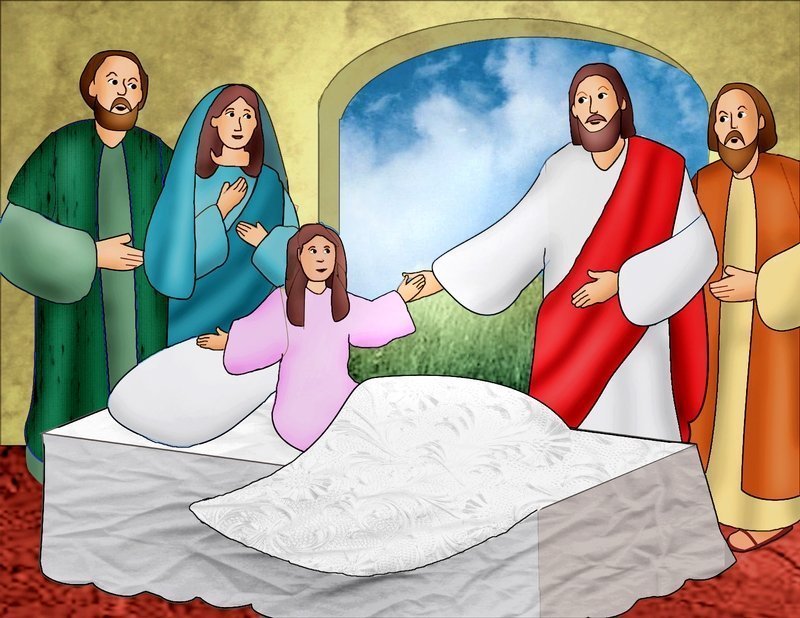 Jesus and his apostles crossed the Sea of Galilee in a boat. A large crowd of people gathered on the shore to greet him. They wanted Jesus to cure them of their illnesses.

One of the people who wanted the Lord’s help was the synagogue official Jairus. Jairus’ 12-year-old daughter was so sick that she was close to death. Jairus had come to find Jesus and bring him home to cure his daughter.

As the crowed pressed around Jesus, Jairus saw the Lord and fell down before him.

“My daughter is at the point of death. Please, come lay your hands on her that she may get well and live,” Jairus begged.

Jesus started to follow Jairus to his house. But it was hard for Jesus to move because there were so many people trying to get close to him.

One person who wanted to get close to Jesus was a woman who for 12 years had suffered with hemorrhages — which means bleeding. She knew if she simply touched Jesus she would be cured. She squeezed her way through the mob of people, touched Jesus’ cloak and was instantly healed.

Jesus felt that power had left his body.

“Who has touched my clothes?” he asked his apostles as he looked around.

The woman fell down before Jesus and told him what she had done.

“Daughter, your faith has saved you. Go in peace and be cured of your affliction,” Jesus told her.

Just then, people from Jairus’ house came to say that his daughter had died and not to bother bringing Jesus home.

“Do not be afraid; just have faith,” he assured Jairus.

Jesus brought Peter, James and John with him into the house, where people were crying loudly.

“Why this commotion and weeping? The child is not dead but asleep,” Jesus told them.

The people made fun of Jesus. He told them to leave, then went into the daughter’s room with her parents and his three apostles.

“Little girl, I say to you, arise!” Jesus commanded.

The girl got up and walked around. Jesus told her parents to give her food and not to tell people what had happened.

1. Who were the two people who wanted Jesus’ help?

2. What did Jesus tell Jairus to have?