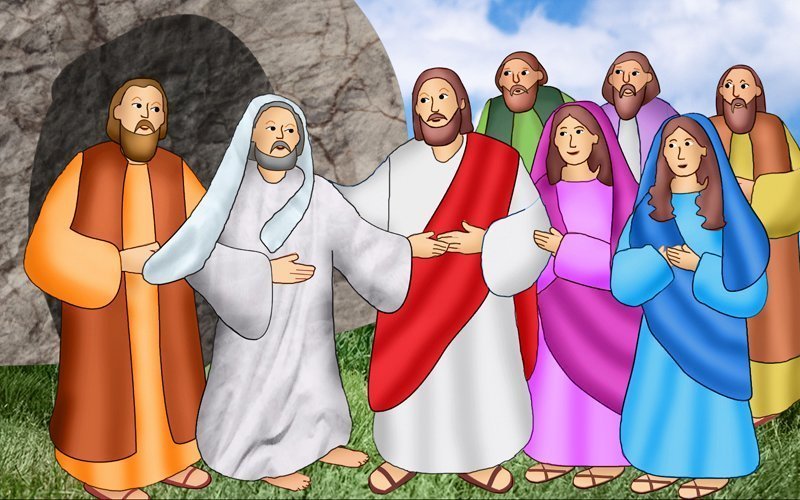 Jesus raises Lazarus from the dead

Jesus raises Lazarus from the dead

Jesus was good friends with Mary, Martha and Lazarus, who were siblings. He loved them very much.

One day, Mary and Martha sent word to Jesus that Lazarus was ill.

Afterward, Jesus remained in the place where he was for two more days. Then he suggested that he and the apostles return to Judea, where Mary, Martha and Lazarus lived in a village near Jerusalem.

“Our friend Lazarus is asleep, but I am going to awaken him,” Jesus told his friends.

The apostles didn’t understand and thought Jesus was talking about ordinary sleep.

“Lazarus has died,” Jesus explained. “And I am glad for you that I was not there, that you may believe. Let us go to him.”

By the time Jesus and the apostles reached the siblings’ village, Lazarus had been dead for four days.

When Mary and Martha heard that Jesus was coming, Martha went to meet him outside of the village.

“Lord, if you had been here, my brother would not have died,” Martha said.

“I am the resurrection and the life; whoever believes in me, even if he dies, will live, and anyone who lives and believes in me will never die. Do you believe this?” Jesus asked.

“Yes, Lord,” Martha answered. “I have come to believe that you are the Christ, the Son of God, the one who is coming into the world.”

Martha returned home to get Mary. Mary left quickly, and some Jews who were there to comfort the sisters followed her.

When Mary saw Jesus, she fell at his feet and wept. Jesus looked at Mary and the crying Jews. He asked where Lazarus had been laid and began to weep.

They took Jesus to a cave that had a stone across the entrance. Jesus had the stone removed then looked up to heaven.

“Father, I thank you for hearing me,” he said. “I know that you always hear me; but because of the crowd here I have said this, that they may believe that you sent me.”

Suddenly, Jesus cried out in a loud voice.

“Lazarus, come out!” he shouted.

Lazarus, who was wrapped in burial bands and had a cloth covering his face, came out of the cave.

“Untie him and let him go,” Jesus said.

1. Who were Jesus’ three friends?

2. How long had Lazarus been dead?

TRIVIA: What was the name of the village near Jerusalem in which Mary, Martha and Lazarus lived? (Hint: Jn 11:1)

John 11 is not the only place in the Bible where Mary, Martha and Lazarus are mentioned.

For example, in John 12, we read that several days before Jesus was crucified, he and the apostles visited Mary, Martha and Lazarus at their home.

Lazarus sat at table with Jesus and the apostles while Martha served them food.

Judas, the apostle who would be betray Jesus, was very upset.

“Why was this oil not sold for 300 days’ wages and given to the poor?” he asked.

“Leave her alone,” Jesus said. “Let her keep this for the day of my burial. You always have the poor with you, but you do not always have me.”

And in Luke 10, we read about another of Jesus’ visits to see his friends.

Martha was serving the guests while Mary sat at Jesus’ feet to listen to him speak.

Martha was upset that Mary wasn’t helping out and wanted Jesus to get her to do so.

“Martha, Martha, you are anxious and worried about many things,” Jesus told her. “There is need of only one thing. Mary has chosen the better part and it will not be taken from her.”

St. Clare was born in Assisi, Italy, in 1193. She was influenced by her fellow townsman, St. Francis of Assisi, and wanted to serve the poor.

She went against the wishes of her family and, with St. Francis’ help, founded an order known as the Poor Clares. For 40 years, she was the head of the community in San Damiano, whose nuns included her sister and widowed mother.

St. Clare served the other nuns in her order who went out to beg, and she became sick because of her hard life. She died in 1253, and we remember her on Aug. 11.

Fill in the blanks in the following sentences about people in the Bible who were raised from the dead. Hints have been provided.