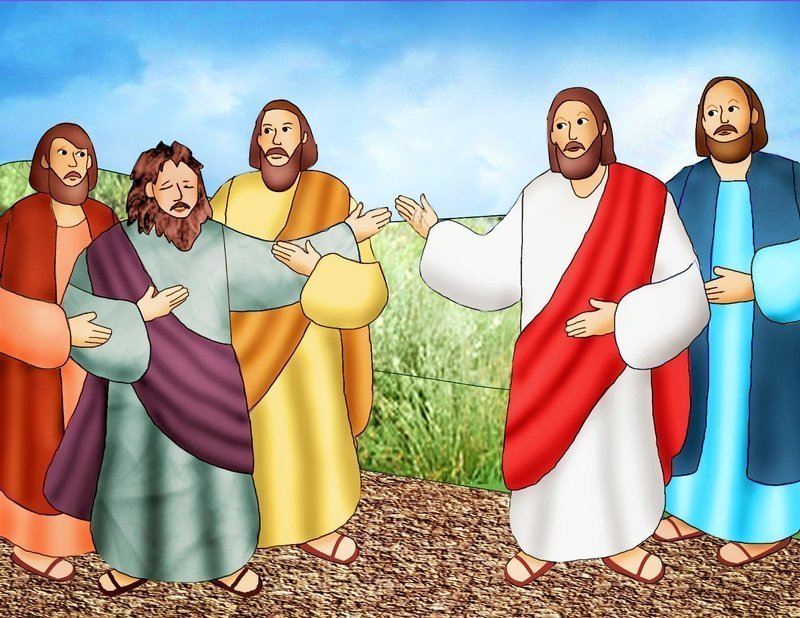 Bible Accent: The fate of the apostles

Before Jesus and the apostles traveled to Jericho, two of his friends, James and John, asked if one of them could sit at his right hand and the other at his left hand in the kingdom of God.

When the other apostles heard this, they were very mad that James and John would ask for such special treatment.

So Jesus decided to talk to his friends about what would make them the greatest among the apostles. Only those who were the servants of all would be the greatest, Jesus explained.

“For the Son of Man did not come to be served but to serve and to give his life as a ransom for many,” he said.

During the trip to Jericho, Jesus preached and served others. A large crowd gathered around him wherever he went.

Just as Jesus and his apostles were getting ready to leave Jericho, there on the side of the road sat a man. His name was Bartimaeus. He was blind and was begging from the crowd of people who were following Jesus.

Bartimaeus could hear the crowd’s excitement. As the people drew closer, he could hear them talk excitedly about Jesus. He knew the Lord must be nearby.

Many people in the crowd yelled at him and told him to be quiet.

But Bartimaeus did not listen. He kept crying out for Jesus to have pity on him.

Jesus stopped. The crowd stopped with him.

“Call him,” Jesus told the people.

“Take courage; get up, he is calling you,” they said.

So Bartimaeus threw aside his cloak and stood up. Although he could not see, he managed to make his way to Jesus and stood before the Lord.

“What do you want me to do for you?” Jesus asked.

Bartimaeus was filled with faith.

Jesus looked at him with love.

“Go your way; your faith has saved you,” the Lord said.

Immediately after Jesus spoke, Bartimaeus received his sight. The man was overjoyed and followed Jesus as the Lord and his friends left Jericho.

1. What city did Jesus and the apostles visit?

2. What was the name of the blind man Jesus healed?

Bible Accent: The fate of the apostles

In Mark 10, not long before Jesus healed the blind Bartimaeus, two of his apostles came up to him.

“Grant that in your glory we may sit one at your right and the other at your left,” said James and John, the sons of Zebedee.

Jesus has just finished explaining to his friends that he was going to be arrested and condemned to death. He asked James and John if they could suffer the same fate.

“The cup that I drink, you will drink, and with the baptism with which I am baptized, you will be baptized; but to sit at my right or at my left is not mine to give but is for those for whom it has been prepared,” Jesus told them.

After Jesus’ death and resurrection, the original apostles traveled many places to spread the word of God and Jesus. It was a dangerous time, because Christians were being persecuted. But this did not stop Jesus’ friends.

According to the New Testament and early Christian history, 10 of the 11 original apostles who preached after Jesus’ death and resurrection met the same fate as the Lord. Many of them were even put to death by crucifixion. James was the first to be killed for his faith. His brother, John, is said to have escaped martyrdom and lived to be an old man.

Although we don’t know very much about St. Ithamar (d. 656), we do know that he was the first Englishman to be named a bishop of a diocese in Britain. It was the Archbishop of Canterbury, St. Honorius, who named Ithamar as the Bishop of Rochester, England, in 644.

Ithamar was known as a very holy and intelligent man. He also was well-known for performing miracles, which is why there are several churches dedicated in his honor.

We remember him on June 10.