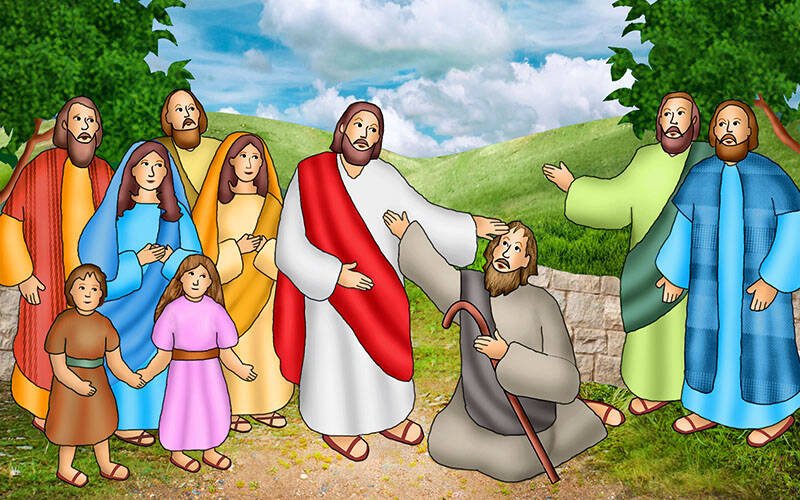 Jesus heals a blind man by the side of the road. (Illustration by Linda Jeanne Rivers)

Jesus and the apostles were traveling to Jerusalem.

Along the way, Jesus healed lepers, told parables and predicted his death and resurrection.

During their travels, Jesus and his friends met an official.

“Good teacher, what must I do to inherit eternal life?” he asked Jesus.

“Why do you call me good? No one is good but God alone,” Jesus replied.

“All of these I have observed from my youth,” the official said.

“There is still one thing left for you: Sell all that you have and distribute it to the poor, and you will have a treasure in heaven. Then come, follow me,” Jesus said.

This made the official very sad, because he was very rich.

“Then who can be saved?” those who heard asked.

As Jesus and his friends reached Jericho, there was a blind man sitting by the side of the road begging. He heard a crowd going by and wanted to know what was happening.

“Jesus of Nazareth is passing by,” someone in the crowd told him.

The blind man started to shout.

Some people in the crowd rebuked him and told him to be quiet, but the blind man shouted all the more.

Jesus stopped. He ordered the blind man to be brought to him.

“What do you want me to do for you?” Jesus asked.

“Have sight; your faith has saved you,” Jesus said.

When the people in the crowd saw what happened, they all began to praise God.

1. Where were Jesus and the apostles traveling?

2. What did the blind man want from Jesus?

When have you witnessed something miraculous?

In John 9, we can read about a time when Jesus healed a man who was born blind.

The apostles asked whether the man had been born blind due to his own sins or the sins of his parents.

“Neither he nor his parents sinned; it is so that the works of God might be made visible through him,” Jesus said. “We have to do the works of the one who sent me while it is day. Night is coming when no one can work. While I am in the world, I am the light of the world.”

Jesus spit on the ground and made clay, which he smeared over the blind man’s eyes. He told the man to wash in the Pool of Siloam. After he washed, he could see.

The man’s neighbors and others who had seen him begging asked the man how he had gained his sight.

“The man called Jesus made clay and anointed my eyes and told me, ‘Go to Siloam and wash.’ So I went there and washed and was able to see,” the man explained.

The man was brought to the Pharisees, because Jesus had healed on the Sabbath. The man explained what had happened.

“This man is not from God, because he does not keep the Sabbath,” some of the Pharisees said, while others said a sinful man could not do such signs.

St. Catherine is thought to have been born to a noble family in Alexandria, Egypt, in the late third century.

After having a vision, she converted to Christianity and began evangelizing others. She even evangelized the wife of the pagan emperor, who was persecuting Christians.

According to legend, she defied the emperor and refuted philosophers who were brought in to test her faith. She was imprisoned, tortured and martyred in 305.

Unscramble the letters in each word and arrange them to form a quotation from the Bible Accent.

I am the light of the world.