Jesus returns to his Father in heaven - Catholic Courier 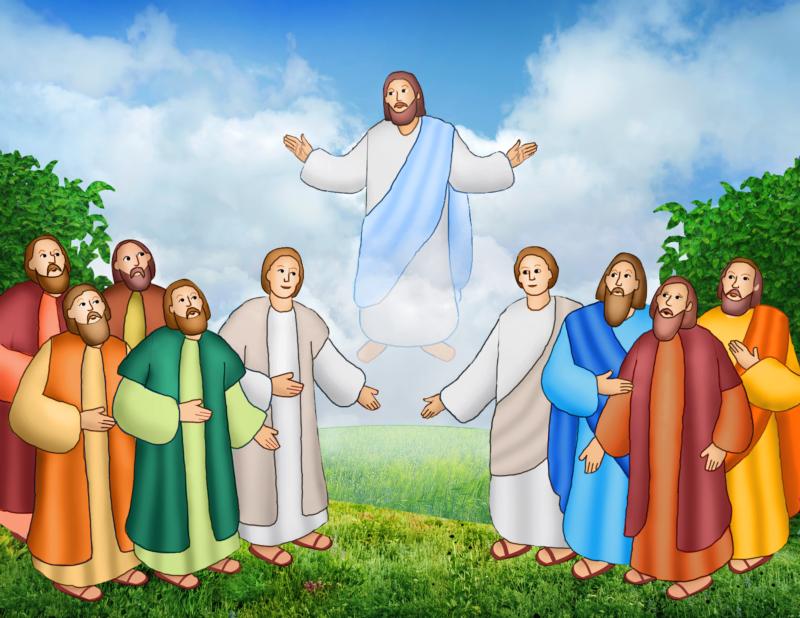 This is the artwork for Kids' Chronicle for May 24, 2020. (Illustration by Linda Rivers)

After Jesus’ resurrection, he appeared to his followers several times.

The first time was at the site of his empty tomb, when he appeared and spoke to Mary of Magdala and had her deliver a message to the apostles.

Afterward, he twice appeared to his friends in a locked room in Jerusalem. And he also walked with two of his followers on the road to Emmaus.

“He presented himself alive to them by many proofs after he had suffered, appearing to them during 40 days and speaking about the kingdom of God,” Luke, the author of the Acts of the Apostles, said in describing these events to a person named Theophilus.

“While meeting with them, he enjoined them not to depart from Jerusalem, but to wait for ‘the promise of the Father about which you have heard me speak; for John baptized with water, but in a few days you will be baptized with the Holy Spirit.'”

Luke went on to explain that Jesus gathered with the apostles on Mount Olivet. The apostles had a question for Jesus.

When Jesus finished speaking, he was lifted up, and a cloud took him from the apostles’ sight.

The apostles craned their necks toward the sky, trying to catch a glimpse of where Jesus went.

As they did so, two men dressed in white clothes suddenly appeared beside them.

“Men of Galilee, why are you standing there looking at the sky? This Jesus who has been taken up from you into heaven will return in the same way as you have seen him going into heaven,” the men said to the apostles.

Afterward, the apostles descended Mount Olivet and returned to Jerusalem, which was a day’s journey away.

1. What was the promise of the Father of which Jesus spoke?

2. Who appeared to the apostles after Jesus was lifted up?

TRIVIA: Who gave a speech after the apostles were filled with the Holy Spirit? (Hint: Acts 2:14)

In Acts 2, we can learn more about the coming of the Holy Spirit at Pentecost.

At the beginning of the chapter, we read that when the time for Pentecost was fulfilled, the apostles were together in one place in Jerusalem.

Suddenly, a noise came from the sky. It sounded like a driving wind, and it filled the entire house in which the apostles were staying.

Tongues of fire appeared. They parted and came to rest on each apostle.

The apostles were all filled with the Holy Spirit, which gave them the power to speak in different languages.

Since it was Pentecost, Jews from every nation under heaven were staying in Jerusalem. They heard all the noise at the apostles’ house, so a large crowd went to investigate.

“Are not all these people who are speaking Galileans? Then how does each of us hear them in his own native language?” the people in the crowd wondered. “What does this mean?”

Others were skeptical and thought the apostles had consumed too much wine.

Peter told the crowd that he and the apostles were not drunk. He then talked about Jesus and explained that Jesus was the Messiah.

About 3,000 people who accepted Peter’s message were baptized that day.

In 1220, he entered the Franciscans and became a missionary in Morocco in Africa. Poor health eventually forced him to return to Europe.

A gifted preacher, Anthony then worked in Italy and France. St. Francis appointed him as the order’s first lector in theology.

for, promise, wait, Father, the, of, the

Wait for the promise of the Father.