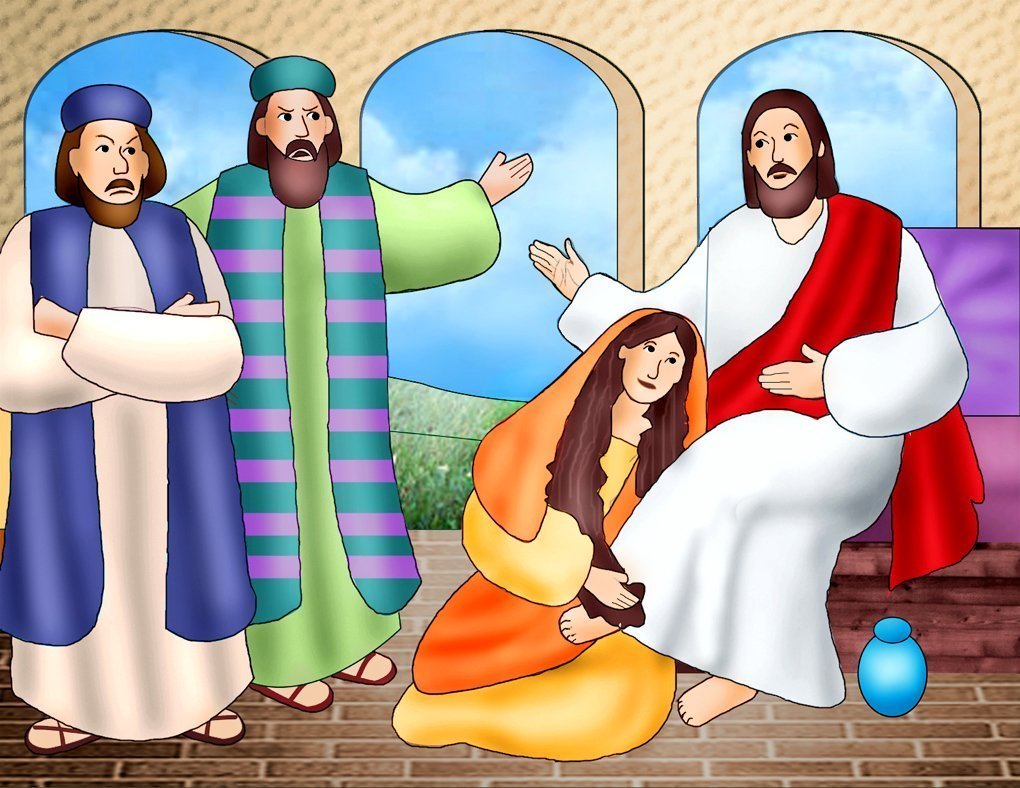 Jesus was eating dinner with his host, Simon, a Pharisee. A woman from the city had heard that Jesus would be dining at the Pharisee’s house, so she made plans to be there to see him. She brought with her an alabaster flask filled with ointment. She sat at Jesus’ feet and began to cry. She wiped her tears from his feet with her hair, then she applied the soothing ointment to his tired feet.

The Pharisee who owned the house was upset by the woman’s actions. He thought to himself, “If this man were a prophet, he would know who and what sort of woman this is who is touching him, that she is a sinner.” Jesus answered the man, as if he had spoken out loud. “Simon, I have something to say to you.”

“Two people were in debt to a certain creditor; one owed five hundred days’ wages and the other owed fifty. Since they were unable to repay the debt, he forgave it for both. Which of them will love him more?”

Simon thought for a moment, then he said, “The one, I suppose, whose larger debt was forgiven.”

Jesus smiled and said, “You have judged rightly.” Then Jesus pointed to the woman and asked Simon another question. “Do you see this woman?” Simon nodded. “When I entered your house, you did not give me water for my feet, but she has bathed them with her tears and wiped them with her hair. You did not give me a kiss, but she has not ceased kissing my feet since the time I entered. You did not anoint my head with oil, but she anointed my feet with ointment. So I tell you, her many sins have been forgiven; hence, she has shown great love.”

Jesus looked down toward the woman with compassion. “Your sins are forgiven,” he told her. There were other guests at the table who had seen and heard everything that had happened. They said among themselves, “Who is this who even forgives sins?”

Jesus, ignoring the whispers of the other guests, said to the woman, “Your faith has saved you; go in peace.”

From there Jesus traveled from one village to another preaching and telling anyone who would listen about the kingdom of God, and his disciples were with him.

READ MORE ABOUT IT:
Luke 7

The pope is the most important leader of the Catholic Church. St. Peter, one of Jesus’ 12 disciples, is considered to be the first pope. Jesus said he would build his house on the rock, which is what the name Peter means.

Our current pope is Benedict XVI. He was elected to that office in April 2005 after the death of John Paul II. The Pope is elected by high-ranking church officials called cardinals. After the special election, the ballots are burned. If the smoke that rises out of the chimney is white, it signals to the world that there is a new pope. If there was a vote but no pope was elected, a chemical is added to the ballots, which causes the smoke to turn black.

The pope’s office is in the Vatican, a private city within the larger Italian city of Rome.

We should pray every day for the pope, the bishop and priests of our own diocese, and for all leaders of churches and governments around the world.

Anthony of Padua (1195-1231) was born in Portugal, but his life’s work is associated with Padua, the Italian city where he lived for the latter part of his life.

He was educated by clergy until he was 15, when he joined the fraternity of St. Augustine. Two years later he moved to Coimbra, Portugal, to continue studying the Bible. After being inspired by the sacrifice made by Franciscan martyrs, Anthony was accepted into the Franciscan community.

Illness prevented him from serving as a missionary to Morocco, but he did travel to Assisi in time to attend an important meeting of the Franciscans. Later he gave an unrehearsed speech at an ordination and as a result was offered the opportunity to teach theology to the other monks. He also earned a reputation as a great preacher to those outside the religious community.

We honor his short but remarkable life on June 13.