Jesus rides into Jerusalem on a donkey - Catholic Courier 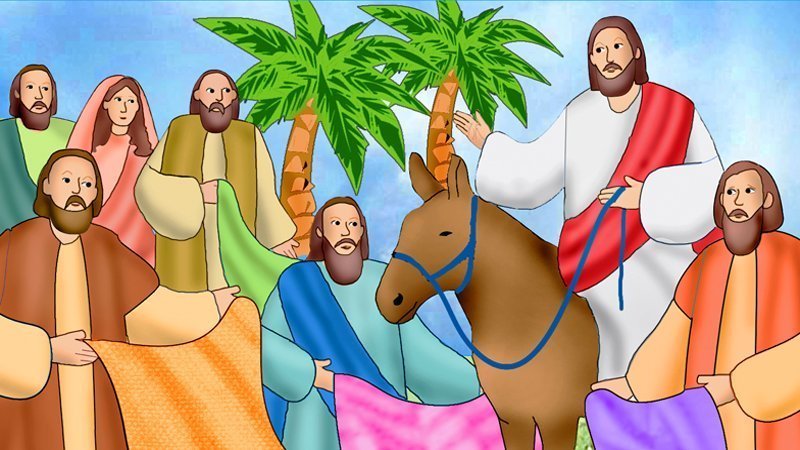 Jesus and his apostles were about to travel to Jerusalem. Before they left, Jesus explained what would happen when they arrived.

“The Son of Man will be handed over to the chief priests and the scribes, and they will condemn him to death, and hand him over to the gentiles to be mocked and scourged and crucified, and he will be raised on the third day,” he told his friends.

As they neared Jerusalem, they came to the village of Bethphage on the Mount of Olives.

Jesus told his friends to go into the village, where they would find a donkey tethered with her colt.

“Untie them and bring them here to me,” Jesus instructed. “And if anyone should say anything to you, reply, ‘The master has need of them.'”

Jesus asked his disciples to bring him the animals to fulfill what had been spoken many years ago by the prophets: “Say to daughter Zion, ‘Behold, your king comes to you, meek and riding on (a donkey), and on a colt, the foal of a beast of burden.'”

Two apostles went to get the donkey and the colt, and they laid their cloaks on the animals’ backs. Jesus rode them the rest of the way to Jerusalem.

As Jesus and his friends were about to enter the city, they saw a very large crowd. It was near the time for the Jewish festival of Passover, so there were many people visiting Jerusalem.

When the people saw Jesus, they began spreading their cloaks on the road so he could ride over them. Others cut palm branches and laid them in the road as well.

Eventually, throngs of people were in front of and behind Jesus. They were all shouting and waving at him with excitement.

“Hosanna to the Son of David; blessed is he who comes in the name of the Lord; hosanna in the highest,” the people exclaimed.

And when Jesus finally entered the city gates, those who were not outside to greet Jesus were shocked at all the commotion and wondered what was going on.

“This is Jesus the prophet, from Nazareth in Galilee,” the people in the crowed replied.

1. To which city did Jesus and the apostles travel?

2. What did the people put in the road?