Jesus says the humble will be exalted - Catholic Courier 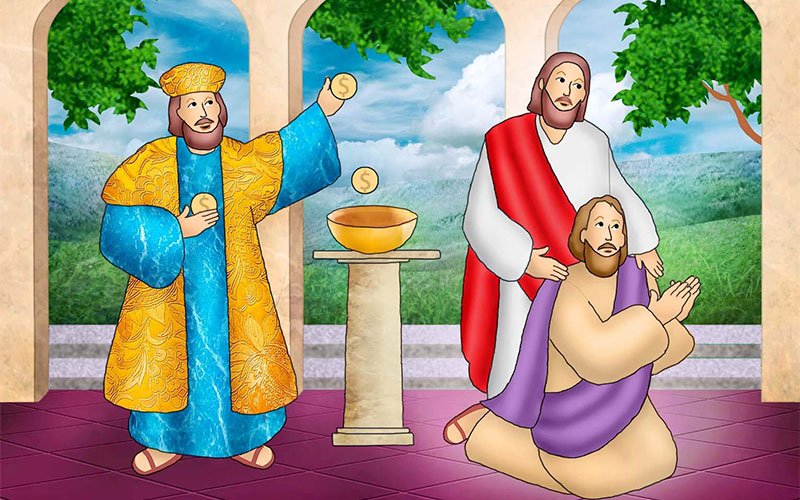 Jesus tells the apostles the parable of the rich tax collector to underscore the importance of being humble. (Illustration by Linda Rivers)

One day, the Pharisees asked Jesus a question.

They wanted to know when they could expect the kingdom of God to come.

Afterward, he continued talking to the apostles about the coming of God’s kingdom.

“The days will come when you will long to see one of the days of the Son of Man, but you will not see it,” he said.

“There will be those who will say to you, ‘Look, there he is,’ (or) ‘Look, here he is.’ Do not go off, do not run in pursuit. For just as lightning flashes and lights up the sky from one side to the other, so will the Son of Man be (in his day). But first he must suffer greatly and be rejected by this generation.”

The first parable explained the necessity of always praying without becoming weary. It was about a persistent widow who repeatedly asked a dishonest judge to make a decision in her case. After being asked so many times, the judge finally decided to deliver a just decision for the widow.

The second parable addressed those who were convinced of their own righteousness and despised everyone else.

One day, Jesus said, two people, a Pharisee and a tax collector, went up to the Temple area to pray.

The Pharisee took up his position and spoke a prayer to himself.

“O God, I thank you that I am not like the rest of humanity — greedy, dishonest, adulterous — or even like this tax collector. I fast twice a week, and I pay tithes on my whole income,” the Pharisee prayed.

But the tax collector stood off at a distance and would not even raise his eyes to heaven.

“O God, be merciful to me a sinner,” the tax collector said as he beat his breast.

Jesus looked at his friends.

1. How many parables did Jesus tell?

In Luke 19, we can read about Jesus’ encounter with a tax collector.

As Jesus and his friends were entering the city of Jericho, a resident named Zacchaeus was eagerly awaiting his chance to see Jesus.

Zacchaeus, a wealthy chief tax collector, was short in stature and could not see over the crowd. So, he ran ahead, climbed a sycamore tree and waited for Jesus to pass by.

Jesus looked up as he came near the tree that Zacchaeus had climbed.

“Zacchaeus, come down quickly, for today I must stay at your house,” Jesus said.

Zacchaeus immediately scrambled down from the tree and received Jesus with joy.

People in the crowd began to grumble that Jesus was going to stay at the house of a sinner.

During Jesus’ time, some of the most hated people were tax collectors. Not only did they work to collect tax money from fellow Jews on behalf of the oppressive Roman Empire, they greedily charged more than was owed and kept the extra money for themselves.

Zacchaeus knew what the people of Jericho thought of him.

“Behold, half of my possessions, Lord, I shall give to the poor, and if I have extorted anything from anyone I shall repay it four times over,” he said to Jesus.

Jesus looked pleased with what Zacchaeus had promised.

St. Martin of Tours was born a pagan in fourth-century Hungary. After moving to Italy with his father, a Roman army officer, he became a catechumen and converted to Christianity.

Martin became a soldier like his father. According to tradition, he gave half of his cloak to a beggar and later had a vision of Jesus wearing it.

He entered religious life after his military service and founded the first monastery in France. Even though he became bishop of Tours, France, in 372, he continued to live a monastic life.

Martin, who died in 397, was the first nonmartyr to be venerated as a saint and given a liturgical feast day.

Draw a line from the name of Jesus’ parable to the description of what the parable teaches. Hints have been provided.

The 10 virgins – Watch for Jesus’ return; The dishonest steward – You cannot serve God and mammon; The two sons – Changing one’s mind and believing; The unforgiving servant – Forgive others so you can be forgiven