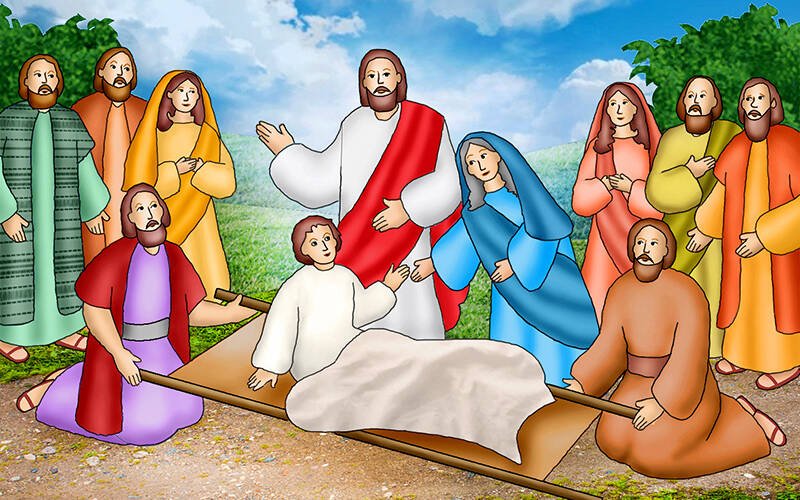 Jesus takes pity on a widow and raises her son from the dead
Bible Accent
Saint for Today: St. Thérèse Couderc
Puzzle

Jesus and the apostles had just visited Capernaum. The elders of the city had asked Jesus to heal a centurion’s slave who was ill and about to die.

The centurion sent messengers to Jesus. They said the centurion felt he was not worthy enough for Jesus come into his home, but he believed that just a word from Jesus would heal his slave.

“I tell you, not even in Israel have I found such faith,” Jesus said.

When the messengers returned home, they found the slave in good health.

Soon afterward, Jesus and his friends, along with a large crowd, traveled to a city called Nain.

As Jesus came upon the city gate, he saw a very sad sight.

A crowd of people was with a widow, whose only son had died. They were following behind the body as it was being borne out of the city.

Jesus was moved with pity for the woman.

The young man sat up and began to speak, and Jesus gave him to his mother.

At first, the people were seized with fear. Then they began to glorify God.

News of what happened spread all around Judea and the surrounding region.

The followers of John the Baptist heard about it and all the other things Jesus was doing, like curing people of their diseases, sufferings and evil spirits, and granting sight to many who were blind.

John’s followers told him about Jesus. Then he summoned two of his followers.

He told them to go to Jesus and ask, “Are you the one who is to come, or should we look for another?”

The two followers went to Jesus.

“John the Baptist has sent us to you to ask, ‘Are you the one who is to come, or should we look for another?’” they said.

“Go and tell John what you have seen and heard: the blind regain their sight, the lame walk, lepers are cleansed, the deaf hear, the dead are raised, the poor have the good news proclaimed to them,” Jesus replied. “And blessed is the one who takes no offense at me.”

1. What sight did Jesus see in Nain?

2. Who wanted to know more about Jesus?

ESSAY: Describe a time when you have glorified God for something good that happened to you.

There are several other places in the New Testament that talk about people being raised from the dead.

For example, in John 11, we read that Jesus’ friend, Lazarus, became ill and died.

Four days later, Jesus went to Lazarus’ tomb, said a prayer to his Father and cried, “Lazarus, come out!”

Lazarus walked out of the tomb, still wrapped in burial cloths.

In Acts 9, we learn that Tabitha, a follower of Jesus from Joppa, became sick and died.

Peter was sent for. He prayed next to the body and then said, “Tabitha, rise up.”

Tabitha opened her eyes, saw Peter and sat up.

And in Acts 20, we read that a young man named Eutychus was sitting on a windowsill listening to Paul preach. Paul talked so long that Eutychus became sleepy and fell three stories to his death.

Paul went to him and said, “Don’t be alarmed; there is life in him.”

When she grew up, she joined a new religious teaching order and took the name Thérèse. Instead of teaching, however, she was sent to manage a mountain hostel for women pilgrims at the shrine of St. John Francis Regis.

Under her guidance, the hostel became a successful retreat house. The order decided to split into a teaching ministry, the Sisters of St. Regis, and a retreat ministry, the Congregation of Our Lady of the Cenacle.

St. Thérèse was superior of the Cenacle sisters until 1838, when Jesuit advisers began replacing her with a succession of wealthy women. She lived out her days as an ordinary nun, suffering deafness and painful arthritis at the end.

Young man, I tell you, arise.