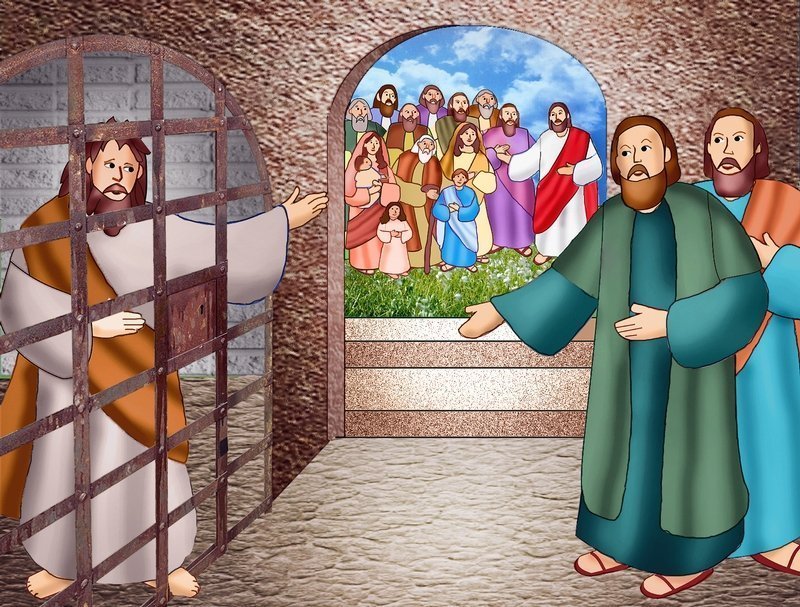 Jesus talks about John the Baptist

Jesus talks about John the Baptist

Once there was a man named John the Baptist. He wore clothes made of camel’s hair and lived in the desert of Judea, eating nothing but locusts and wild honey.

People came from all around Judea to hear John preach. Many people who wanted to confess their sins and repent were baptized by John in the Jordan River.

“Repent, for the kingdom of heaven is at hand!” he would shout to the people who came to see him.

Little did the people know that John was the person whom the prophet Isaiah had prophesied about. Isaiah had said that before the Messiah came, another would come before him, “a voice of one crying out in the desert, ‘Prepare the way of the Lord, make straight his paths.'”

When John preached to the people, he was not afraid to tell them they were doing wrong and to change their evil ways. He even pointed out King Herod’s sinful ways and told him to repent. The king did not like being told he was doing something wrong, so he had John thrown in prison.

While he was in prison, John heard about the ministry of Jesus. So he sent his followers to find Jesus and ask him a question.

“Are you the one who is to come, or should we look for another?” John’s followers asked Jesus.

Jesus looked at the men.

“Go and tell John what you hear and see: the blind regain their sight, the lame walk, lepers are cleansed, the deaf hear, the dead are raised, and the poor have the good news proclaimed to them,” Jesus said. “And blessed is the one who takes no offense at me.”

As John’s followers walked away, Jesus began talking to the crowd about John.

“What did you go out to the desert to see?” he asked the people. “To see a prophet? Yes, I tell you, and more than a prophet. This is the one about whom it is written: ‘Behold, I am sending my messenger ahead of you; he will prepare your way before you.’ Amen, I say to you, among those born of women there has been none greater than John the Baptist. … And if you are willing to accept it, he is Elijah, the one who is to come.”

2. Whom did Jesus say John was?

In Luke 1:5-25, we read about a priest named Zechariah and his wife, Elizabeth, who were both righteous in God’s eyes.

Elizabeth could not have children, and now she and Zechariah were both very old.

One day, Zechariah entered the sanctuary of the Lord to burn incense as the people prayed outside. Suddenly, an angel appeared.

“Your prayer has been heard,” the angel said. “Your wife Elizabeth will bear you a son, and you shall name him John. … He will turn many of the children of Israel to the Lord their God.”

Zechariah was afraid and also skeptical. He did not realize he was speaking to an angel.

“How shall I know this?” he asked. “For I am an old man, and my wife is advanced in years.”

The angel explained that he was Gabriel and had been sent by God to tell Zechariah the good news.

“But now you will be speechless and unable to talk until the day these things take place, because you did not believe my words, which will be fulfilled at their proper time,” Gabriel said.

The people outside the sanctuary wondered what was taking Zechariah so long. When he came out and could not speak, they knew he’d had a vision from God.

And just as Gabriel said, Elizabeth conceived and had a son, who became known as John the Baptist.

St. Dominic of Silos was born in 11th-century Spain. He became a monk and eventually became prior of his monastery in Navarre, but he was banished after he disagreed with the king.

Dominic was then welcomed by King Ferdinand I of Castile, who sent him to the monastery of St. Sebastian in Silos. Dominic became abbot and eventually made the monastery the most famous one in Spain.

Many miracles are attributed to St. Dominic. We remember him on Dec. 20.