Jesus talks about who will be saved - Catholic Courier 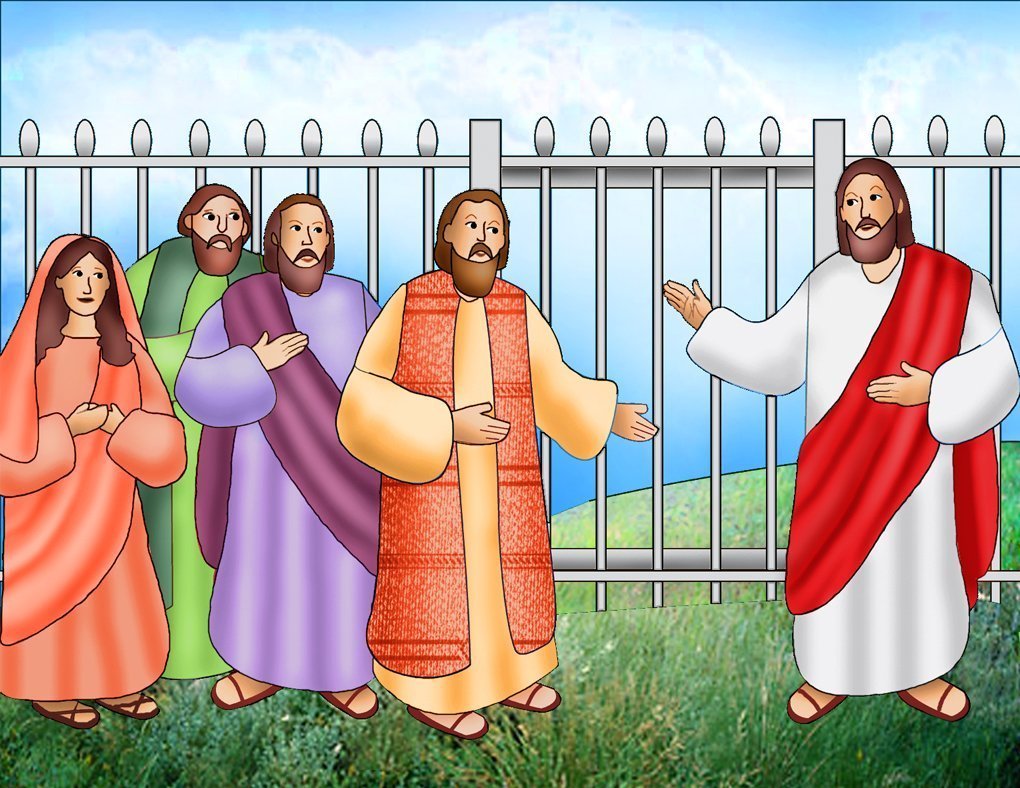 Jesus talks about who will be saved

Jesus talks about who will be saved

Jesus had been traveling for many days with his disciples. As they passed through towns and villages along the way, Jesus would stop to teach the crowds of people that gathered around him wherever he went. One of those stops was at an open field near Jerusalem.

One of the men who came to hear Jesus asked him a question. “Lord, will only a few people be saved?”

Jesus answered so that everyone would hear him and hopefully understand what he was trying to say. “Strive to enter through the narrow gate, for many, I tell you, will attempt to enter but will not be strong enough.”

Jesus pretended to lock an imaginary door from the inside, then he pretended he was on the outside knocking on that same door. “After the master of the house has arisen and locked the door, then will you stand outside knocking and saying, ‘Lord, open the door for us.’” Jesus shook his head and continued. “He will say to you in reply, ‘I do not know where you are from.’” Clasping his hands together as if he were begging, Jesus said, “And you will say, ‘We ate and drank in your company and you taught in our streets.’ Then he will say to you, ‘I do not know where (you) are from. Depart from me, all you evildoers!’ And there will be wailing and grinding of teeth when you see Abraham, Isaac, and Jacob and all the prophets in the kingdom of God and you yourselves cast out.”

The sounds of murmuring voices swept across the crowd as the people wondered who would enter the kingdom of heaven and who would be cast out of it. But Jesus, knowing their thoughts and concerns, smiled and said, “And people will come from the east and the west and the north and the south and will recline at table in the kingdom of God. For behold, some are last who will be first, and some are first who will be last.”

When Jesus had finished speaking and was ready to leave, some Pharisees came to warn him. “Go away,” they said, “leave this area because Herod wants to kill you.”

Jesus said to them, “Go and tell that fox, ‘Behold, I cast out demons and I perform healings today and tomorrow, and on the third day I accomplish my purpose.’”

READ MORE ABOUT IT:
Luke 13

Pope Benedict XVI recently made a change that will lead to more frequent celebration of the Tridentine Mass, which is the name for the form of Latin Mass used prior to the Second Vatican Council.

The pope said he wanted the Tridentine Mass to be more available for today’s Catholics, including those who have missed the old Latin Mass since the 1960s, when it was replaced by texts for Mass in English and other modern languages.

Pope Benedict said he hoped making the Tridentine Mass more available also would help to heal divisions between the Roman Catholic Church and the followers of the late Archbishop Marcel Lefebvre. The liturgical changes of Vatican II were among a number of issues that led the French archbishop to leave the church in 1988.

Ouen (600-684) was the son of a man named Authaire, who also was declared to be a saint and who often was visited by St. Columban. When Ouen served in the court of France’s King Clotaire II, he was in the company of three other young men who became saints, Eligius, Wandrille and Didier. Ouen built a monastery on some land he received from the king’s successor, Dagobert I.

He appointed Ailea, a disciple of St. Columban, as its first abbot. In 641, Ouen became the Bishop of Rouen. From that time on, he frequently fasted and prayed. He built other monasteries, he established programs to help people in need and he sent missionaries around the world. He also still helped the French royalty and became an adviser to King Thierry III. We honor him on Aug. 24.