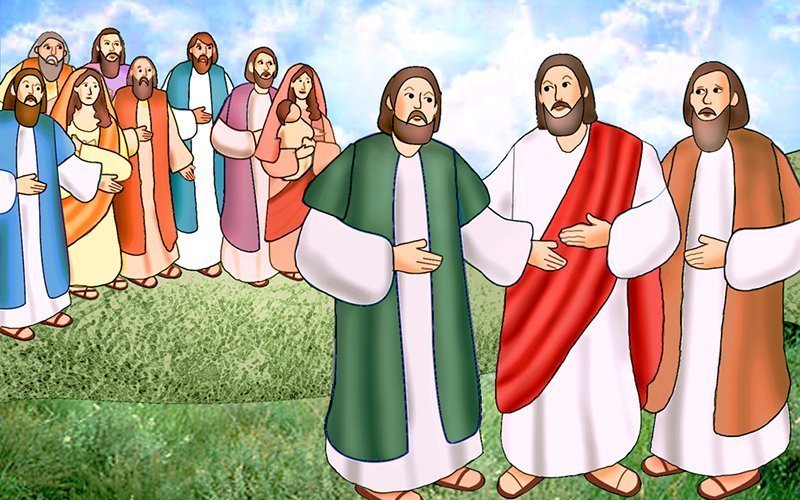 Such a large crowd had gathered around Jesus that the people were stepping on and over each other in order to see the Lord. Jesus spoke with his disciples privately before he addressed the people.

Jesus knew his disciples had fears and worries, and there were many things about God they did not understand. But he loved them, and he was very patient with them. “Do not be afraid any longer, little flock,” he told them, “for your Father is pleased to give you the kingdom. … Gird your loins and light your lamps and be like servants who await their master’s return from a wedding, ready to open immediately when he comes and knocks.”

Jesus looked into his friends’ faces, studying their reactions. He often spoke to them in parables so they would have to think and pray in order to understand what he was saying to them. Then he said, “Be sure of this: if the master of the house had known the hour when the thief was coming, he would not have let his house be broken into. You also must be prepared, for at an hour you do not expect, the Son of Man will come.”

Peter, the disciple who often had questions, asked Jesus, “Lord, is this parable meant for us or for everyone?”

Jesus did not answer Peter directly, but he continued with the story he was telling them. “Who, then, is the faithful and prudent steward whom the master will put in charge of his servants to distribute (the) food allowance at the proper time? Blessed is that servant whom his master on arrival finds doing so. Truly, I say to you, he will put him in charge of all his property.”

After speaking more with his disciples, Jesus stood up to speak to the crowd of people that had only grown larger. But his words were not gentle. “When you see (a) cloud rising in the west you say immediately that it is going to rain — and so it does; and when you notice that the wind is blowing from the south you say that it is going to be hot — and so it is. You hypocrites! You know how to interpret the appearance of the earth and the sky; why do you not know how to interpret the present time?”

READ MORE ABOUT IT:
Luke 12

Q&A
1. What did Jesus tell his disciples about his kingdom?
2. Why was Jesus angry with the crowd of people?

Garments worn by priests and deacons during Mass are called vestments, from the Latin word for clothing. There are four colors of vest- ments, each with a special meaning.

White symbolizes purity, innocence or glory and would be worn on feast days of our Lord, his mother Mary or saints who were not martyrs; red is the color of fire and blood and is worn on days that celebrate the Holy Spirit or martyred saints; purple represents penance and is worn during Lent and Advent; green, which is like the green of spring, symbolizes the growth of the church and is worn during ordinary time.

A very visible scarf-like ornament worn by priests is called the stole, which looks like a narrow strip running over each shoulder and down the front. The back collar of the chasuble is usually decorated with a cross.

Joan Delanoue (1660-1736) of Saumur, France, was the youngest of 12 children. When she was 25 years old, she inherited her widowed mother’s shop. Not being a religious person at the time, she opened her business on Sundays, which angered most of her neighbors. She also provided rooms for pilgrims.

In 1693, Francoise Souchet came to the inn looking for a place to stay. Her intention was to stay in the area for only a short time, but she stayed for many years. She and Joan became close friends.

Because of Franciose’s influence on her, Joan began to provide shelter in her inn for orphans. The inn soon became known as Providence House. Other women came to help and, along with Joan, they became nuns. Since they were founded on the Feast Day of St. Anne, they called themselves the Sisters of St. Anne.