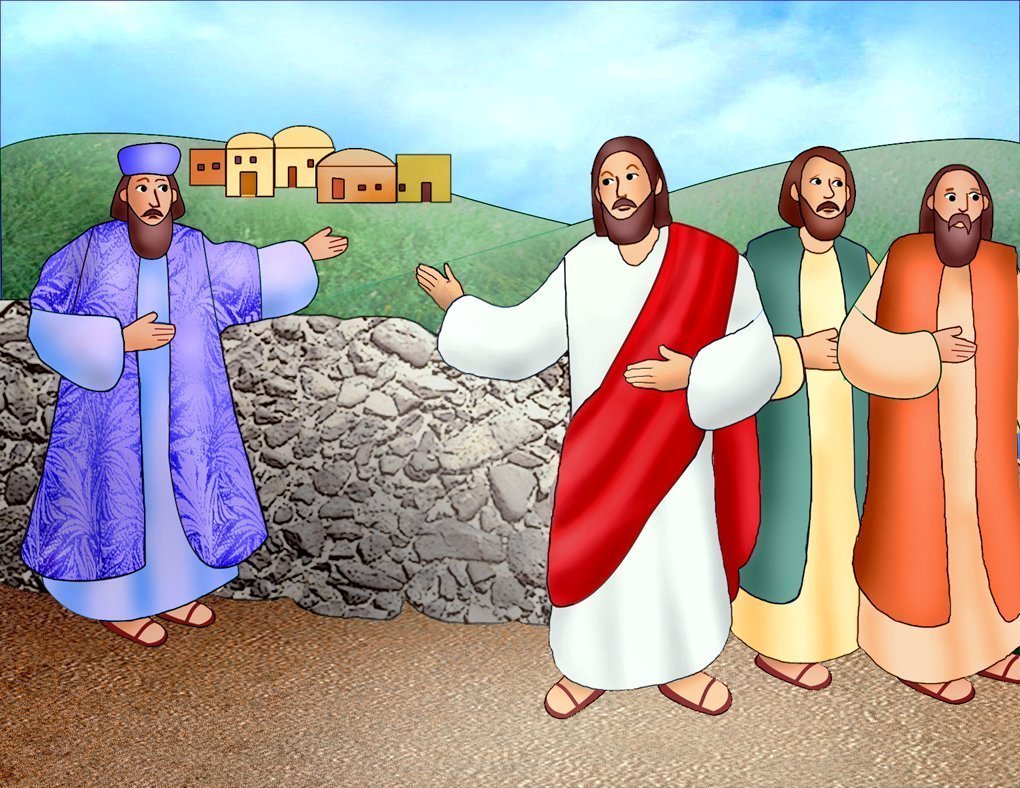 Jesus was just preparing to leave the city when a man called out to him. When he reached Jesus, the man knelt down and asked, “Good teacher, what must I do to inherit eternal life?”

The man stood and said, “Teacher, all of these I have observed from my youth.”

Jesus was filled with compassion for the man, but he knew the thoughts of his mind, even if the man did not know himself. Jesus said softly, “You are lacking in one thing. Go, sell what you have, and give to (the) poor and you will have treasure in heaven; then come, follow me.”

What Jesus had asked changed the expression on the man’s face. He was very unhappy that he might have to pay such a high price. He had come from a wealthy family, and his possessions were very important to him. He went home with his head down.

The disciples wondered among themselves, “Then who can be saved?” Jesus smiled at their question and added more explanation. “For human beings it is impossible, but not for God. All things are possible for God.” Peter, who often spoke what the other disciples were thinking, said, “We have given up everything and followed you.”

Jesus answered, “Amen, I say to you, there is no one who has given up house or brothers or sisters or mother or father or children or lands for my sake and for the sake of the gospel who will not receive a hundred times more now in this present age . . . and eternal life in the age to come.”

The first act of God recorded in the Bible was to create heaven and earth. We now live on earth. Someday we will live in heaven. Jesus told his disciples he was going to prepare a place where we could be with him, a place he called “my Father’s house.”

The Book of Revelation tells us choirs of angels fill heaven with their singing. Heaven also has been described as a holy city. In a vision John saw the walls of the city “decorated with every precious stone,” including jasper, sapphire and emeralds. He also wrote, “The city had no need of sun or moon to shine on it, for the glory of God gave it light, and its lamp was the Lamb.”

As young men, Frumentius (d. 380) and Aedesius sailed to Arabia with Meropius, a teacher and philo sopher from Tyre, which is in present-day Lebanon.

On the voyage home, the ship stopped in Ethiopia. Some of the sailors started an argument with the natives, who became angry and killed everyone except the two young men.

Frumentius and Aedesius were brought before the king. After hearing why they were there, the king decided he liked them. He appointed Frumentius as his secretary and Aedesius as his cupbearer. After many years the two men returned to their homes, and both became priests. Frumentius returned to Ethiopia as a missionary and Bishop of Ethiopia.