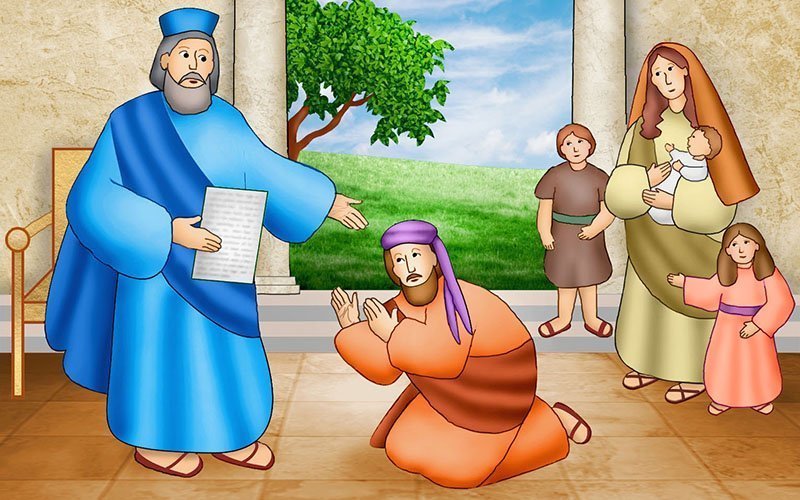 This is the artwork for Kids' Chronicle for Aug. 13, 2020. (Illustration by Linda Rivers)

Jesus teaches about sin and forgiveness

One day, Jesus talked to his followers about sin.

He told them what they should do if a fellow believer sinned against one of them.

“Lord,” Peter asked when Jesus was finished, “if my brother sins against me, how often must I forgive him? As many as seven times?”

Jesus explained that the kingdom of heaven could be likened to a king who decided to settle accounts with his servants. One servant owed a huge amount but couldn’t repay it.

“His master ordered him to be sold, along with his wife, his children and all his property, in payment of the debt,” Jesus said.

The servant fell down and did the king homage.

“Be patient with me, and I will pay you back in full,” he begged the king.

The king had pity on the servant and forgave the debt, Jesus said.

The servant then left to find a fellow servant who owed him a much smaller debt.

“Be patient with me, and I will pay you back,” the man said as he fell to his knees.

But the servant refused. Instead, he had the fellow servant put in prison until he repaid the debt.

When the other servants saw what had happened, they reported the whole affair to the king.

“You wicked servant!” the king said. “I forgave you your entire debt because you begged me to. Should you not have had pity on your fellow servant, as I had pity on you?”

The angry king then handed over the servant to the torturers until he repaid his entire debt.

“So will my heavenly Father do to you, unless each of you forgives his brother from his heart,” Jesus said.

1. How many times did Jesus tell Peter to forgive?

2. What did the servant do that upset the king?

ESSAY: When have you forgiven someone who sinned against you?

In the Bible, we read how a repentant sinner brings joy to God.

For example, in Luke 15:1-7, Jesus told the parable of the lost sheep.

“What man among you having a hundred sheep and losing one of them would not leave the 99 in the desert and go after the lost one until he finds it?” he asked the Pharisees and scribes, who were complaining that he was eating with sinners. “And when he does find it, he sets it on his shoulders with great joy.”

Jesus said that the man would ask his friends and neighbors to rejoice with him because the lost sheep had been found.

“I tell you, in just the same way there will be more joy in heaven over one sinner who repents than over 99 righteous people who have no need of repentance,” Jesus said.

In Luke 17:3-4, we also read that Christians should forgive those who sin and repent.

In 1858, he was ordained a priest of the Diocese of Treviso and served small parishes. He then became chancellor and spiritual director at the seminary.

He was named bishop of Mantua in 1884, and in 1893, he became a cardinal and patriarch of Venice.

In 1903, he was elected pope and became known as the “pope of the Eucharist.” During his pontificate, he lowered the age for receiving first Communion, promoted biblical study, and encouraged daily Communion and daily Bible reading.

Using the hints provided, fill in the blanks in the sentences about sin and forgiveness.