Jesus teaches his followers to be disciples - Catholic Courier 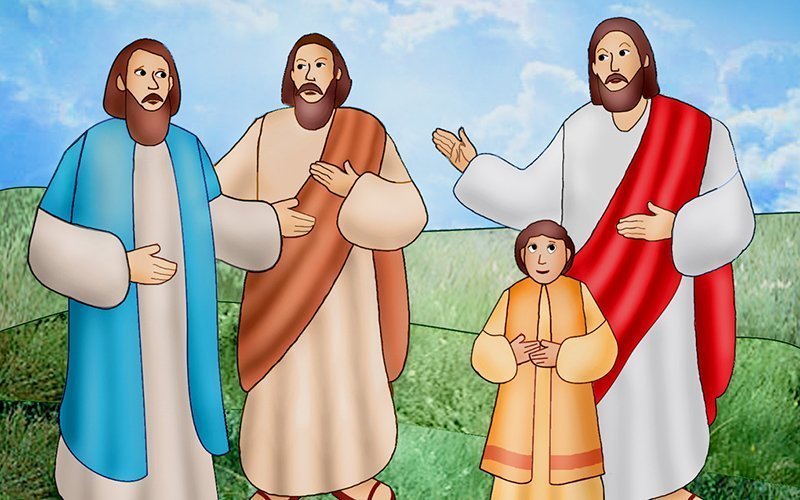 Jesus teaches his followers to be disciples

Jesus teaches his followers to be disciples

Although Jesus talked often of peace and humility, sometimes his disciples would argue with each other. When Jesus realized they were arguing about which of them was the greatest of his disciples, he pointed to a young child and gave them a lesson on greatness.

The disciples tried to plan a stop along the way in a Samaritan village, but the people there did not want Jews to stay any length of time among them. The Samaritans and the Jews had a history of not liking each other. The disciples returned to Jesus with this report.

James and John were outraged by this insult to Jesus. They asked, “Lord, do you want us to call down fire from heaven to consume them?” Jesus was angry because of their attitude, and he told them they would just have to spend the night in another village that would be more welcoming.

Along the way, Jesus spoke to his disciples and the other men who were traveling with him of God’s love and spiritual mysteries, and he also said he would not always be with them. So one man declared, “I will follow you wherever you go.”

As he continued walking, Jesus replied, “Foxes have dens and birds of the sky have nests, but the Son of Man has nowhere to rest his head.” Then Jesus pointed to one of his companions and said, “Follow me.”

But this man was not quite ready to give up his home life and follow Jesus. Instead he asked Jesus to be patient. “Lord, let me go first and bury my father.”

And Jesus told him, “Let the dead bury their dead. But you, go and proclaim the kingdom of God.”

Another man said, “I will follow you, Lord, but first let me say farewell to my family at home.”

Jesus said to that man, “No one who sets a hand to the plow and looks to what was left behind is fit for the kingdom of God.”

Q&A
1. What were the disciples arguing about?
2. What did Jesus ask him companions to do for him?

The body of water that is at the lowest level on earth is in danger. The Dead Sea, because people have been diverting and overusing the rivers that feed it, has been drying up and moving away from the shore by three feet every year for the past 25 years. At this pace, the sea could actually disappear within the next 50 years. Another hazard that coincides with the drying up of the sea is the formation of sink holes. Some of these holes that open, often without warning, can be as deep as 100 feet. Jordanian and Israeli scientists and engineers have been developing plans to save the Dead Sea and the ecosystem that depends on it. It is also very important tourist attraction. If money can be raised, a piping system will be built from the Red Sea to the Dead Sea so that, hopefully, the Red Sea water will save the Dead Sea.

William of Vercelli (1085-1142) was raised by relatives because both of his parents died when he was young.

When he was 14, he left his home in Italy and headed for Spain. Years later, he made a home for himself as a hermit in a mountainous region of Italy. While there, his first miracle occurred, which was the healing of a blind man. Word of the miracle spread, and many people came to see him. Since he wanted to continue living a more private life, he moved to Matera, where he became friends with a man named John, who later also was declared a saint.

William tried to return to the life of a hermit, but too many people wanted to follow his example and learn from him. Believing that God was sending him a message, he established a community of religious.

William continually tried to lead a life of hardship in his service to the Lord, which most other people could not follow with him. He put priors in charge of his community and went off to be alone with God.