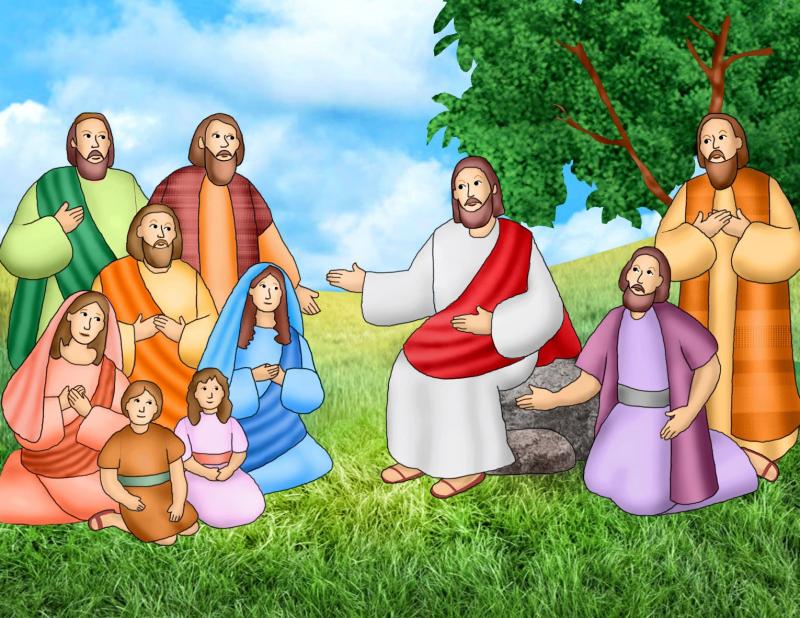 One day, Jesus went up the mountain, sat down and began to teach his followers many things.

He talked to them about the law, oaths, retaliation and anger. He also told them to love their enemies and pray for those who persecute them.

Then Jesus began to teach about almsgiving.

“When you pray, do not be like the hypocrites, who love to stand and pray in the synagogues and on street corners so that others may see them. … But when you pray, go to your inner room, close the door and pray to your Father in secret. And your Father who sees in secret will repay you,” he said.

Jesus also reminded his followers not to babble and use many words like the pagans.

“This is how you are to pray: Our Father in heaven, hallowed be your name, your kingdom come, your will be done, on earth as in heaven. Give us today our daily bread; and forgive us our debts, as we forgive our debtors; and do not subject us to the final test, but deliver us from the evil one,” he said.

Jesus pointed out that one must be forgiving in order to be forgiven.

Jesus also told his followers about the proper way to fast.

1. Where did Jesus go to talk to his followers?

2. What are two things Jesus taught his followers?

ESSAY: What is something that you have prayed for and why?

In Luke 11:5, we read more about Jesus’ teaching on prayer.

“Suppose one of you has a friend to whom he goes at midnight and says, ‘Friend, lend me three loaves of bread, for a friend of mine has arrived at my house from a journey, and I have nothing to offer him,’” Jesus said.

The answer was, “Do not bother me … I cannot get up to give you anything.”

“I tell you, if he does not get up to give him the loaves because of their friendship, he will get up … because of his persistence,” Jesus said. “And I tell you, ask and you will receive; seek and you will find; knock and the door will be opened to you. For everyone who asks, receives; and the one who seeks, finds; and to the one who knocks, the door will be opened.”

A father would not hand his son a snake if he asked for fish, Jesus noted.

“If you, then, who are wicked, know how to give good gifts to your children, how much more will the Father in heaven give the Holy Spirit to those who ask him?” he said.

Saul was a Jew who was born in the first century in Tarsus, which is now Turkey.

Saul persecuted Christians, and he was present at the stoning of Stephen, the first Christian martyr.

One day, Saul had a dramatic conversion experience during which Jesus spoke to him. After that, he believed in Jesus and began working with the apostles to spread the Gospel. He also became known as Paul.

Paul made three missionary journeys that are recounted in the Acts of the Apostles. The New Testament also contains the letters that he wrote to the new Christian communities he had evangelized.

According to tradition, Paul was beheaded near Rome during the reign of Emperor Nero. We remember Paul on June 29.

Answers: daily, us, bread, today, give, our

Give us today our daily bread.