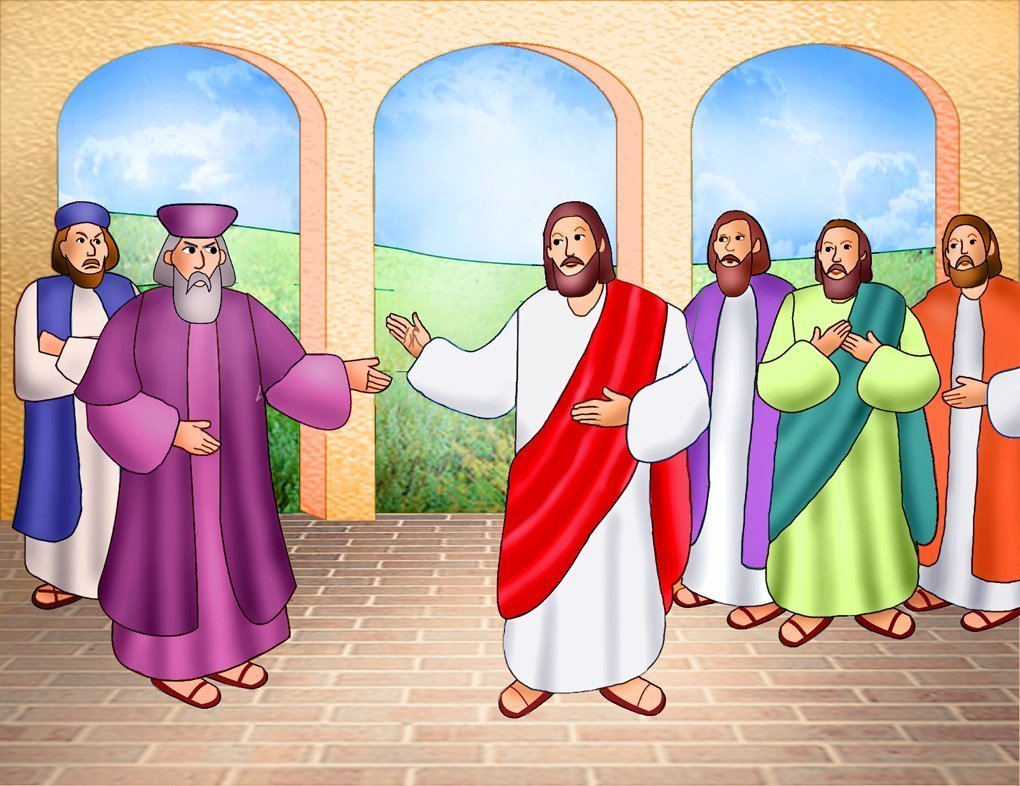 Jesus was teaching in the temple area when some of the chief priests and elders came up to him and asked him, “By what authority are you doing these things? And who gave you this authority?”

Jesus knew they were trying to trick him, so he said in reply, “I shall ask you one question, and if you answer it for me, then I shall tell you by what authority I do these things. Where was John’s baptism from? Was it of heavenly or of human origin?”

The men whispered to each other. “If we say ‘Of heavenly origin,’ he will say to us, ‘Then why did you not believe him?’ But if we say, ‘Of human origin,’ we fear the crowd, for they all regard John as a prophet.” One of the men, speaking for the others, said, “We do not know.”

So Jesus told them, “Neither shall I tell you by what authority I do these things.”

Jesus continued with his teaching by telling the people a story. “What is your opinion?” he asked them. “A man had two sons. He came to the first and said, ‘Son, go out and work in the vineyard today.’ He said in reply, ‘I will not,’ but afterwards changed his mind and went. The man came to the other son and gave the same order. He said in reply, ‘Yes, sir,’ but did not go. Which of the two did his father’s will?”

Many of the people answered at the same time. “The first,” they said. “Amen, I say to you, tax collectors and prostitutes are entering the kingdom of God before you.” Jesus stood up and pointed out into the crowd. “When John came to you in the way of righteousness, you did not believe him; but tax collectors and prostitutes did. Yet even when you saw that, you did not later change your minds and believe him.”

Jesus continued to teach using parables. He told the people about greedy tenants who beat a landowners’ servants and even killed the man’s own son. He reminded them of a passage from the Psalms that said, “The stone that the builders rejected has become the cornerstone.”

And he said to them, “Therefore, I say to you, the kingdom of God will be taken away from you and given to a people that will produce its fruit.”

Q&A
1. Who asked Jesus about his authority?
2. What did Jesus say about the rejected stone?

The Gospel of Matthew is the first Gospel in the New Testament and covers the life of Jesus from his birth to his resurrection. For a long time it was believed to have been written by Matthew, a tax collector and one of the first 12 Apostles of Jesus.

Scholars now think that this Gospel was not written by someone who knew Jesus, but by someone who used the accounts of people who did know Jesus and who used information from such writings as the Gospel of Mark.

The Matthew who wrote the Gospel was more likely a Greek man who had converted to Judaism. The book was probably written 40 to 60 years after the ministry of Jesus.

Wenceslaus (907-929), was the son of the ruler of Bohemia who had become a Christian. He was raised by his grandmother St. Ludmila, who was committed to teaching him to love God and to follow his commandments. She was aided by a priest in this endeavor. Wenceslaus’ father died and his mother assumed leadership of the country. She was not as Christian as her husband and did not encourage the people to become Christians. Ludmila told Wenceslaus that if he became the ruler to continue to serve God. Ludmila was murdered, but Wenceslaus’ mother was dethroned and he became the new leader. He said he would support God’s law and oppose murder. He also tried to establish friendly relations with neighboring countries.

After being murdered by his own brother, Wenceslaus was declared a martyr by his people. We remember him on Sept. 28.