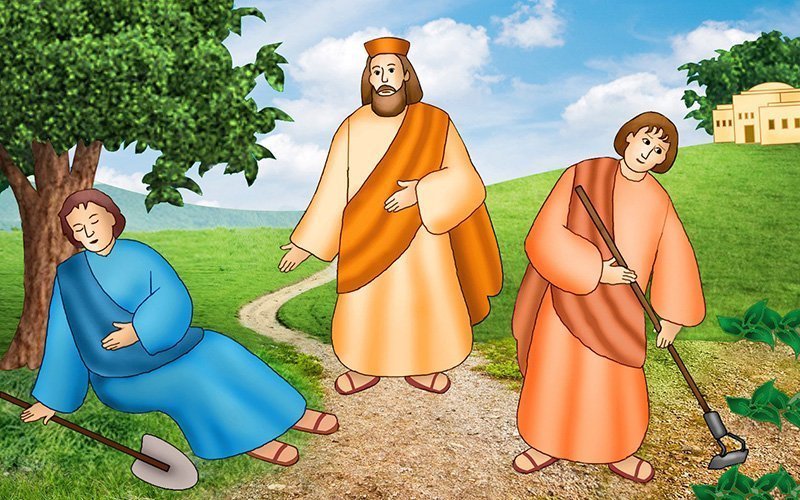 This is the artwork for Kids' Chronicle for Dec. 15, 2020. (Illustration by Linda Rivers)

One day, Jesus was teaching in the Temple area.

The chief priests and elders of the people approached him.

“By what authority are you doing these things? And who gave you this authority?” they asked.

“I shall ask you one question, and if you answer it for me, then I shall tell you by what authority I do these things,” he said.

“Where was John’s baptism from? Was it of heavenly or of human origin?” Jesus wanted to know.

The chief priests and elders of the people discussed the question among themselves.

“If we say, ‘Of heavenly origin,’ he will say to us, ‘Then why did you not believe him?’ But if we say, ‘Of human origin,’ we fear the crowd, for they all regard John as a prophet,” they whispered to each other.

In light of these things, the chief priests and elders of the people decided to say that they did not know the answer.

“Neither shall I tell you by what authority I do these things,” Jesus replied.

Jesus then posed another question.

“What is your opinion?” he asked as he began to tell the parable of a man and his two sons.

The man came to the first son and told him to go out and work in the vineyard for the day, Jesus said.

“I will not,” the first son replied, but afterward he changed his mind and went.

The man approached his second son and told him to work in the vineyard that day.

“Yes, sir,” the second son replied, but he did not go.

“Which of the two did his father’s will?” Jesus asked.

The chief priests and the elders of the people agreed that the first son — the one who had said he would not work in the vineyard but changed his mind and went — is the one who did his father’s will.

2. Which son in the parable did his father’s will?

ESSAY: Describe a time when you followed through on a promise you had made, and explain the importance of doing so.

There are several places in the Bible that talk about two sons.

For example, in Genesis 4, we read about Cain and Abel, two sons of Adam and Eve.

Each brother made offerings to God. Cain offered the fruit of the ground, while Abel offered the fatty portion of the firstlings of his flock.

God looked with favor on Abel’s offerings but not Cain’s.

This made Cain so angry and jealous that he killed Abel.

The younger son wanted to leave home, so he asked to be given his share of his father’s estate. The father did so, and the younger son set off for a distant country.

The younger son squandered all of his money. When he could not afford to support himself, he decided to return home and admit his sinfulness to his father.

He expected his father to no longer treat him like a son. Instead, the father arranged a homecoming feast.

The older brother, who always did what his father asked, was jealous. His father explained that it was time to celebrate and rejoice, because the lost younger brother had been found.

St. John of Kanty was born around 1390 in Poland. He spent most of his life teaching sacred Scripture at the University of Krakow, although he also was a parish priest for a time.

John had a reputation for holiness. He was generous to the poor of Krakow, ate no meat and slept on the floor. He also urged his students to have good manners during controversies and impressed upon them the need for moderation.

Then why did you not believe him?