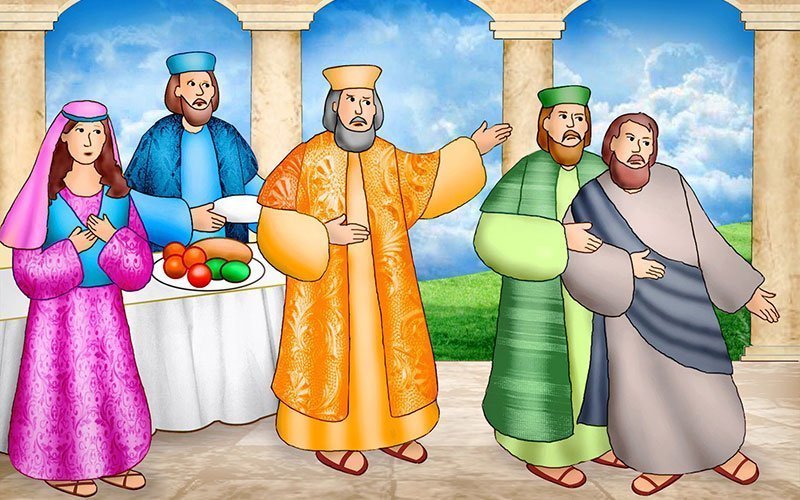 This is the artwork for Kids' Chronicle for Oct. 11, 2020. (Illustration by Linda Rivers)

One day, Jesus and the apostles were in Jerusalem. They went into the Temple area, and Jesus began to teach the people about God.

The chief priests and the elders of the people approached Jesus.

“By what authority are you doing these things? And who gave you this authority?” they demanded to know.

Instead of answering their questions, Jesus began to tell some parables.

“The kingdom of heaven may be likened to a king who gave a wedding feast for his son,” Jesus began one of his parables. “He dispatched his servants to summon the invited guests to the feast, but they refused to come.”

When the wedding guests did not come, the king again sent his servants.

“Tell those invited: ‘Behold, I have prepared my banquet, my calves and fattened cattle are killed, and everything is ready; come to the feast,'” the king had his men tell the invited guests.

Some of the invited guests ignored the invitation and went away. The rest grabbed the servants, mistreated them and killed them.

The king was so enraged that he sent his troops to destroy the murderers and burn their city.

“The feast is ready, but those who were invited were not worthy to come. Go out, therefore, into the main roads and invite to the feast whomever you find,” the king told his remaining servants.

The servants went out into the streets and invited both good and bad people to fill the hall for the wedding feast.

When the king entered the hall to meet his guests, he saw a man who was not dressed in a wedding garment.

The king approached the man and asked how he came in without wearing a wedding garment. But the man was reduced to silence.

“Bind his hands and feet, and cast him into the darkness outside, where there will be wailing and grinding of teeth,” the king commanded. Not having a wedding garment was a symbol that the man had not repented.

“Many are invited, but few are chosen,” Jesus said about the kingdom of heaven.

1. Who approached Jesus as he was teaching?

2. How did the king fill his hall for the wedding feast?

ESSAY: Create your own parable to describe the kingdom of heaven.

In Matthew 25, Jesus told another parable about a wedding feast to explain the kingdom of heaven.

At the beginning of the chapter, he told the parable of 10 virgins, five of whom were wise and five foolish.

All 10 had brought oil-filled lamps, but only the wise ones brought extra oil.

The bridegroom was long delayed, and all of the women fell asleep with their lamps burning.

At midnight, there was a cry: “Behold, the bridegroom! Come out to meet him!”

All 10 virgins got up and trimmed their lamps.

“Give us some of your oil, for our lamps are going out,” the foolish virgins said to the wise ones, who refused.

The foolish virgins went to buy oil, while those who were ready went into the feast with the bridegroom.

“Lord, Lord, open the door for us!” the foolish virgins cried when they returned and found the door to the feast locked.

“Therefore, stay awake,” Jesus urged, “for you know neither the day nor the hour.”

St. John of Capistrano was born in Italy in 1386. He studied law and married a woman from an important family in Perugia, Italy, and in 1412 became the city’s governor.

He was imprisoned during a civil war. During that time, he had a vision of St. Francis. He experienced a spiritual conversion, was dispensed from his marriage vows, joined the Friars Minor in 1416 and was ordained in 1420.

John became a great preacher. He also worked to reform his order and served as the friars’ vicar general. In 1456, he led a wing of the Christian army in a successful battle against the Turks, who had besieged Belgrade.

Using the hints provided, fill in the blanks in Jesus’ quotations about heaven.