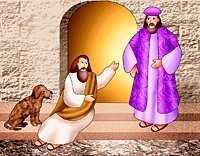 Bible Accent: The Gospels are the heart

Jesus looked around at the people who had come to hear him preach. He had told them several parables about lost sheep, lost coins and a lost son. He had also told them about a dishonest steward and the kingdom of God. He decided to tell a story about listening to the prophets.

“There was a rich man who dressed in purple garments and fine linen and dined sumptuously each day,” Jesus said. “And lying at his door was a poor man named Lazarus, covered with sores, who would gladly have eaten his fill of the scraps that fell from the rich man’s table. Dogs even used to come and lick his sores.”

Jesus paused to allow his listening to imagine the rich man and Lazarus in their minds. A man in good health living in luxury, a sick man living in poverty. “When the poor man died,” Jesus continued, “he was carried away by the angels to the bosom of Abraham. The rich man also died and was buried, and from the netherworld, where he was in torment, he raised his eyes and saw Abraham far off and Lazarus at his side.”

Jesus knelt down as if he were the rich man, and he said, “Father Abraham, have pity on me. Send Lazarus to dip the tip of his finger in water and cool my tongue, for I am suffering torment in these flames.”

Then Jesus stood as if he were Abraham answering the rich man. “My child, remember that you received what was good during your life time while Lazarus likewise received what was bad; but now he is comforted here, whereas you are tormented. Moreover, between us and you a great chasm is established to prevent anyone form crossing who might wish to go from our side to yours or from your side to ours.”

Then the rich man pleaded, “Then I beg you, father, send him to my father’s house, for I have five brothers, so that he may warn them, lest they, too, come to this place of torment.”

Abraham replied, “If they will not listen to Moses and the prophets, neither will they be persuaded if someone should rise from the dead.”

Q&A
1. What happened to Lazarus after he died?
2. What was the first thing the rich man asked Abraham to do?

Bible Accent: The Gospels are the heart

The Catechism of the Catholic Church tells us “The Gospels are the heart of the Scriptures because they are our principal source for the life and teaching of the incarnate Word, our Savior.” The history of the Gospels is further broken down into three stages.

The first is the life and teaching of Jesus. The Gospels tell us of the miracles and deeds Jesus performed and the lessons he taught for us to learn from. The second is the oral tradition, which means the apostles told about the life of Jesus after he had ascended into heaven. They were empowered by knowledge and understanding given to them by the Holy Spirit. The third stage is the actual writing of the Gospels. The authors recorded stories that had been told and combined them with others that had been written down to establish a truthful biography of Jesus. Every Mass includes a reading from one of the Gospels.

Rhipsime (d. 312) was one of a group of young women who had taken vows not to marry, but to dedicate their lives to the service of the Lord. At the same time, the emperor was seeking a wife.

He sent a painter around Rome to paint pictures of the single women. When the painter returned and the emperor looked at the paintings, he decided he wanted to marry Rhipsime. When Rhipsime was told, she did not want to marry the emperor. She escaped with Gaiana, who was in charge of her, on a ship bound for Alexandria. From there they continued on to a convent in Armenia.

The King of Armenia learned that Rhipsime was hiding in his country and ordered her brought to him. He too fell in love with her and wanted her to marry him. She refused. He ordered her and many of the other sisters from the convent put to death. We honor these women on Sept. 29.