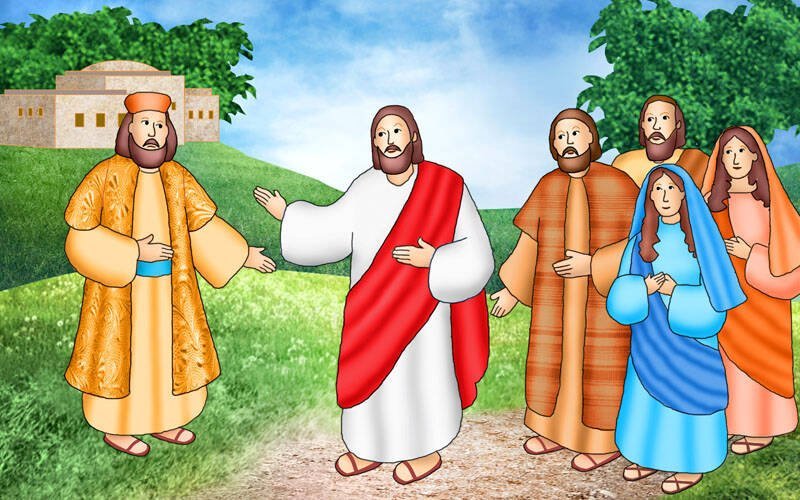 Jesus tells the apostles how to inherit eternal life

Jesus tells the apostles how to inherit eternal life

One day, as Jesus was ready to set out on a journey, a man ran up to him and knelt down.

“Good teacher,” he said, “what must I do to inherit eternal life?”

“Why do you call me good? No one is good but God alone,” Jesus replied.

He looked at the man.

“Teacher, all of these I have observed from my youth,” the man said.

“You are lacking in one thing,” Jesus told him. “Go, sell what you have, and give to the poor and you will have treasure in heaven; then come, follow me.”

The man’s face fell when he heard Jesus’ reply. He walked away sadly because he had many possessions.

Jesus watched the man walk away.

“How hard it is for those who have wealth to enter the kingdom of God!” he exclaimed as he turned toward the apostles.

The apostles were amazed by his words.

“Then who can be saved?” the apostles said to each other in surprise.

“For human beings it is impossible, but not for God. All things are possible for God,” he told his friends.

“We have given up everything and followed you,” he told Jesus.

“Amen, I say to you, there is no one who has given up house or brothers or sisters or mother or father or children or lands for my sake and for the sake of the Gospel who will not receive a hundred times more now in this present age: houses and brothers and sisters and mothers and children and lands, with persecutions, and eternal life in the age to come,” Jesus said.

“But,” he continued, “many that are first will be last, and the last will be first.”

1. What did the rich man want to know?

2. Why did the rich man walk away sadly?

ESSAY: Describe how you are storing up treasures in heaven.

In Luke 16, Jesus told a parable to explain that people cannot serve both God and mammon, or material wealth.

In verses 19-31, Jesus tells of a rich man who wore fine clothes and ate the best foods.

Lying at his door was Lazarus, a poor man who was covered in sores. Lazarus would have gladly eaten scraps that fell from the rich man’s table, but the rich man ignored him.

One day, both men died.

Angels took Lazarus to the bosom of Abraham, while the rich man went to the netherworld, a place of torment.

Far off in the distance, the rich man could see Lazarus with Abraham.

“Father Abraham, have pity on me,” the rich man cried. “Send Lazarus to dip the tip of his finger in water and cool my tongue, for I am suffering torment in these flames.”

“But now he is comforted here, whereas you are tormented,” Abraham said.

SPOTLIGHT ON THE SAINTS:

St. Alphonsus Rodriguez was born in 1533 to a wealthy wool merchant in Spain.

He left school and took over the family business at age 23 after his father died. He married and had children, but within a few short years, his wife, daughter, son and mother all had died.

His sisters introduced him to daily meditation, and he attempted to enter the Jesuits. At first, he was rejected for being too old and uneducated, but in 1571, he was accepted as a lay brother.

Alphonsus, who mentored St. Peter Claver and others, served as doorkeeper at the Jesuit college in Mallorca for 45 years. He died in 1617, and we remember him on Oct. 30.

Using the hints provided, but a T next to the sentences about wealth that are true and an F next to the ones that are false.