Jesus tells the apostles to watch for his return - Catholic Courier 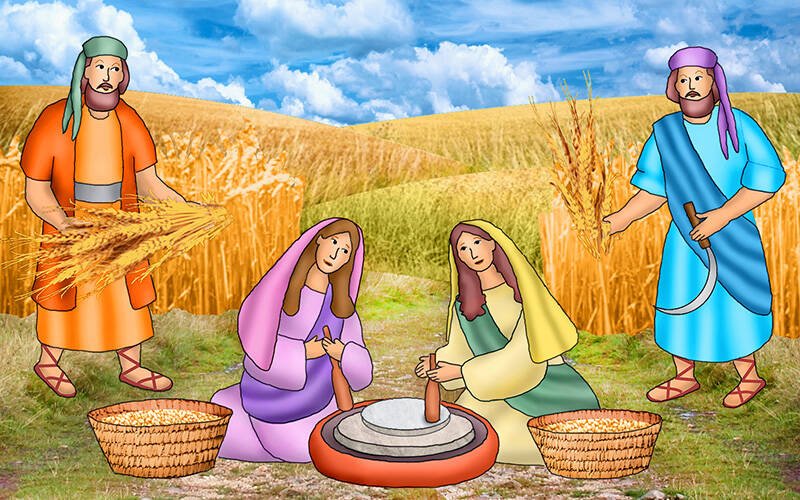 Jesus told his disciples of his return by describing two men in a field and two women grinding at the mill. One of the men and one of the women will be taken, he said, and the other man and the other woman will be left behind. (Illustration by Linda Jeanne Rivers)

Children’s story: No one knows the day or the hour
Trivia
Bible Accent: Parable of the faithful servant
Saint for Today: St. Juan Diego
Puzzle: Fill in the blanks

One day, Jesus and the apostles were sitting on the Mount of Olives.

“What sign will there be of your coming, and of the end of the age?” they asked.

“See that no one deceives you,” Jesus replied. “For many will come in my name, saying, ‘I am the Messiah,’ and they will deceive many.”

Jesus said that some of the signs will be wars, famines and earthquakes.

“See that you are not alarmed, for these things must happen, but it will not yet be the end,” he said. “All these are the beginning of the labor pains.”

Jesus told his friends that they will then be hated, persecuted and killed because of his name.

He also said that many will be led into sin, and many false prophets will arise to deceive people.

“But the one who perseveres to the end will be saved,” Jesus said. “And this Gospel of the kingdom will be preached throughout the world as a witness to all nations, and then the end will come.”

However, Jesus said, the day and hour when all these things will happen is known only to God.

Jesus then described two men in a field and two women grinding at the mill. One of the men and one of the women will be taken, he said, and the other man and the other woman will be left behind.

“Therefore, stay awake!” Jesus urged his friends. “For you do not know on which day your Lord will come.”

“Be sure of this,” he continued, “if the master of the house had known the hour of night when the thief was coming, he would have stayed awake and not let his house be broken into. So too, you also must be prepared, for at an hour you do not expect, the Son of Man will come.”

1. What did the apostles want to know?

2. What did Jesus urge the apostles to do?

Where did Jesus say those in Judea must flee? (Hint: Matthew 24:16)

Answer: To the mountains.

In Matthew 24:45-51, we can read another parable about someone coming unexpectedly.

“Who, then, is the faithful and prudent servant, whom the master has put in charge of his household to distribute to them their food at the proper time?” Jesus asked the apostles.

Jesus said the faithful servant is the one who gives out the food at the proper time when the master is not there.

“Blessed is that servant whom his master on his arrival finds doing so. Amen, I say to you, he will put him in charge of all his property,” Jesus said.

Then he described the actions of the unfaithful servant.

“But if that wicked servant says to himself, ‘My master is long delayed,’ and begins to beat his fellow servants, and eat and drink with drunkards, the servant’s master will come on an unexpected day and at an unknown hour and will punish him severely and assign him a place with the hypocrites, where there will be wailing and grinding of teeth,” Jesus said.

St. Juan Diego was a native Mexican who was born near present-day Mexico City in 1474. He converted to Christianity and was baptized at the age of 50.

On Dec. 9, 1531, he was walking to Mass when Mary appeared to him on Tepeyac Hill. She asked him to petition the bishop for a shrine to be built there.

The bishop asked for a sign, so Juan returned to the hill on Dec. 12, 1531. Mary told him to pick flowers blooming atop the hill and put them in his cloak to take to the bishop. When Juan opened the cloak, the flowers fell out and the image of Our Lady of Guadalupe adorned his garment.

Juan lived the remainder of his life as a hermit near the first chapel built on the hill. He died in 1548, and we remember him on Dec. 9.

Using the hints provided, fill in the blanks in the sentences that can be found in Matthew 24.