Jesus tells the crowd the parable of the sower - Catholic Courier 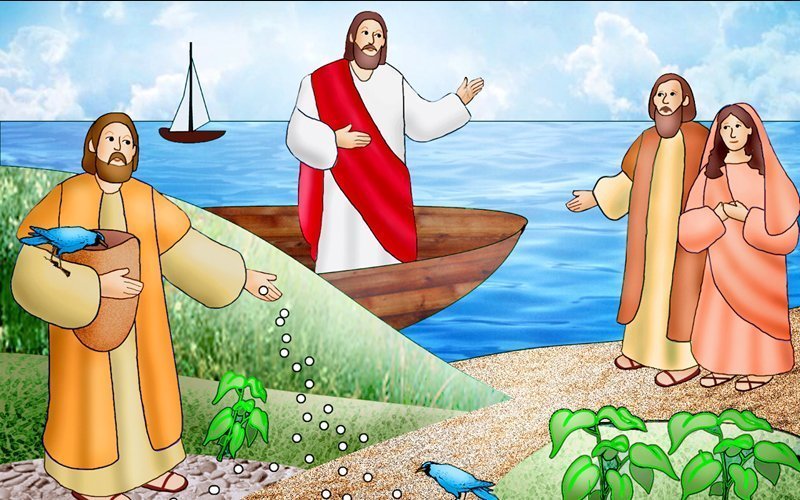 Jesus tells the crowd the parable of the sower

Jesus tells the crowd the parable of the sower

Jesus wanted to spend some time by himself, so he found a quiet spot by the sea. Once word spread that Jesus was there, so many people came to see him that he had to get into a boat and preach to the people from there. He told them a story.

Pretending to throw seed, Jesus said, “A sower went out to sow. And as he sowed, some seed fell on the path, and birds came and ate it up. Some fell on rocky ground, where it had little soil. It sprang up at once because the soil was not deep, and when the sun rose it was scorched, and it withered for lack of roots. Some seed fell among thorns, and the thorns grew up and choked it.”

Then Jesus paused and held his arms up and out. “But some seed,” he said, “fell on rich soil, and produced fruit, a hundred or sixty or thirtyfold. Whoever has ears ought to hear.”

Afterward, the disciples asked Jesus a question. “Why do you speak to them in parables?” Jesus answered, “Because knowledge of the mysteries of the kingdom of heaven has been granted to you, but to them it has not been granted. To anyone who has, more will be given and he will grow rich; from anyone who has not, even what he has will be taken away. This is why I speak to them in parables, because ‘they look but do not see and hear but do not listen or understand.’”

The disciples felt privileged that Jesus would share the mysteries of the kingdom of heaven with them, but they were not sure even they understand the story Jesus had just told. Knowing this, Jesus explained it to them.

READ MORE ABOUT IT:
Matthew 13

Q&A
1. Why did Jesus have to get into the boat?
2. What did Jesus say about the seed in rich soil?

Prayers are an important part of the life of a Christian, and the church teaches several special prayers to help us on our spiritual journey. The Lord’s Prayer was given to us by Jesus, and we sometimes refer to it as the “Our Father,” because of its first line.

The Hail Mary acknowledges Mary’s special role in the life of Jesus and asks her to pray for us as well. Another prayer that asks for the intercession of Mary into our lives is called the Salve Regina. We recite the Apostles’ Creed during Mass, and this prayer summarizes what we believe as Catholics. The rosary is a prayer that helps us to honor the life of Christ through the joyful, sorrowful and glorious mysteries.

Let us remember to pray every day, whether we say a formal prayer or just take a few minutes to talk to God.

St. Bonaventure, who was born in Italy in 1221, joined the order of Friars Minor and was educated at the University of Paris. He enjoyed preaching, and his sermons were inspiring to many. While still at the university, he wrote one his most well-known theological works, “The Commentary on the Sentences of Peter Lombard.” St. Bonaventure wrote another paper, “Concerning Perfection of Life,” for Isabella, the sister of St. Louis IX and a leader of the Poor Clares.

When he was appointed the minister general of the Friars Minor, he wrote a paper to settle a dispute between two groups of friars.

Pope Clement IV nominated St. Bonaventure Archbishop of York, but asked the pope to accept his refusal. In 1273, Pope Gregory X named him Cardinal-Bishop of Albano, near Rome.