Jesus tells the parable of the talents - Catholic Courier 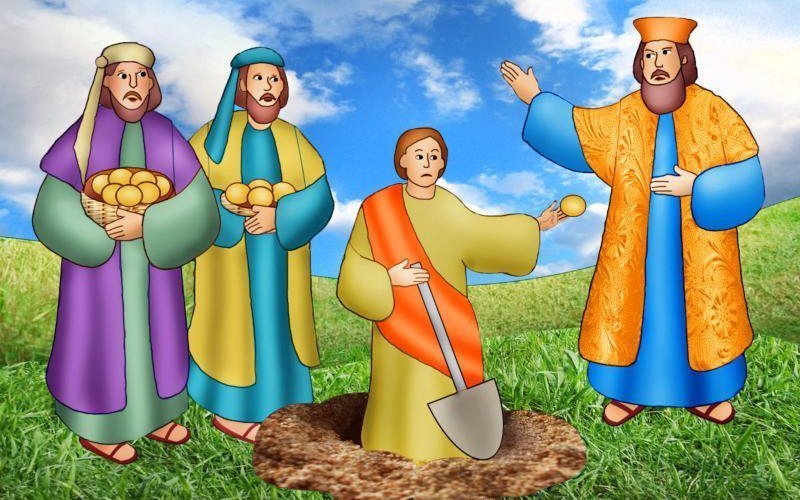 One day, Jesus told the apostles a parable to show the importance of watching for the coming of the Son of Man.

He told the story of a man who was going on a journey. Before he left, he put his three servants in charge of his possessions.

The man gave each servant money according to his ability. The first received five talents, the second received two talents and the third received one talent.

After the man left, the first servant immediately traded his talents and made five more.

The second servant quickly put his talents to work and made another two.

But the third servant buried his one talent in a hole he had dug in the ground.

After a long time, the man came home. He asked his servants what they had done with the money he had entrusted to them.

“Master, you gave me five talents. See, I have made five more,” the first servant said.

Likewise, the second servant showed that he had doubled his talents.

The man was happy that these servants had prepared for his return.

“Well done, my good and faithful servant,” he told each one. “Since you were faithful in small matters, I will give you great responsibilities. Come, share your master’s joy.”

Then the servant who buried his talent came forward.

“Master … out of fear I went off and buried your talent in the ground. Here it is back,” the third servant said.

The man was not pleased.

“You wicked, lazy servant!” the man cried, saying that the servant could have at the very least put the money in the bank so it would earn interest.

“Take the talent from him and give it to the one with 10,” the man commanded. “For to everyone who has, more will be given and he will grow rich; but from the one who has not, even what he has will be taken away.”

But the man was not yet done punishing the third servant for his unwise decision.

“And throw this useless servant into the darkness outside,” he said, “where there will be wailing and grinding of teeth.”

1. What did the man give each of his servants?

2. Why was the man angry at the third servant?

The Bible has quite a bit to say about money and managing finances.

For example, Scripture says that we must think correctly about money, striking a balance between laziness that leads to financial ruin (Prv 6:6-11) and obsession with gaining wealth, which leads to evil (1 Tm 6:9-10).

Scripture also points out that it is wise to save money. In Prv 21:20, we read that “precious treasure and oil are in the house of the wise, but the fool consumes them.” In 1 Cor 16:1-4, we learn that Paul urged believers to slowly save their money so they could donate to the church in Jerusalem.

If we don’t think ahead and save, we risk going into debt and may have to borrow money, making us “the slave of the lender” (Prv 22:7).

Part of managing our wealth also includes sharing it with others. In Acts 20:35, Paul says to “keep in mind the words of the Lord Jesus who himself said, ‘It is more blessed to give than to receive.'”

And in Mt 6:19-21, Jesus also reminds us that earthly possessions are not as important as storing up treasures in heaven.

St. John Gabriel Perboyre was born in France in 1802. In 1818, he joined the Congregation of the Mission with the dream of being a missionary. After his ordination in 1826, however, he was assigned to seminary formation in France.

He was finally sent to China in 1835 to learn the language so he could work in Hunan to rescue and evangelize abandoned children.

When he was working in Hupeh in 1839, he had to go into hiding due to Christian persecution. A recent convert turned him in, but he refused to betray other missionaries or trample on the cross.

He was tortured at least 20 times before being martyred in 1840. We remember him Sept. 11.

In Mt 25:1-13, Jesus also told the parable of the 10 virgins to show the importance of watching for the Son of Man’s return. Below are several sentences from the parable. Look up the Bible verse and fill in the correct word to complete each sentence.