Jesus tells the parable of the unjust steward - Catholic Courier 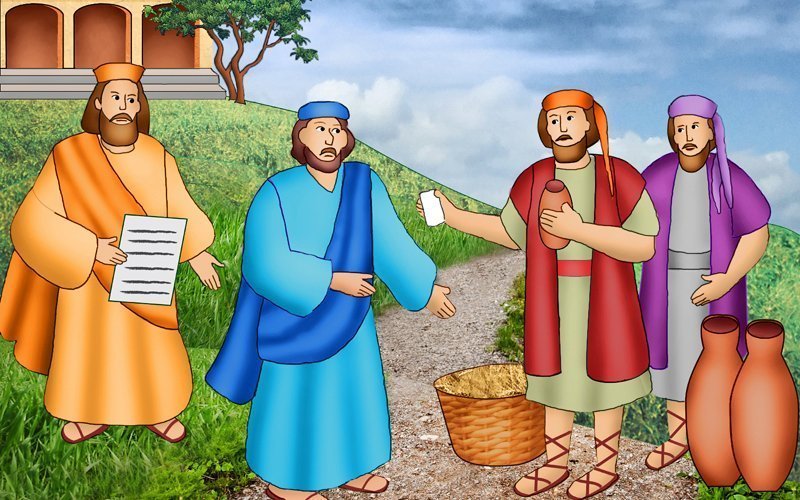 Jesus tells the parable of the unjust steward

One day, Jesus told his followers a parable about a rich man and the steward who oversaw his estate.

The rich man found out that the steward was dishonest and had squandered his property.

“Prepare a full account of your stewardship, because you can no longer be my steward,” the rich man angrily told the steward.

“What shall I do, now that my master is taking the position of steward away from me?” the steward wondered. “I am not strong enough to dig and I am ashamed to beg.”

He quickly came up with an idea. It was a common practice for a steward to charge his master’s debtors more than what was owed and keep the extra for himself. So he decided to gain favor with the rich man’s debtors by charging only what they actually owed. In return, the debtors would welcome him into their homes after he lost his job.

The steward called in the rich man’s debtors one by one.

“How much do you owe my master?” he asked one debtor.

“One hundred measures of olive oil,” the man replied.

“Here is your promissory note. Sit down and quickly write one for 50,” the steward said.

Another debtor owed the rich man 100 kors of wheat, but the steward told him to write a promissory note for 80.

When the rich man heard of this, he couldn’t help but praise the steward’s prudent actions.   Although Jesus did not want his followers imitating the steward’s dishonesty, he did want them to learn a lesson in the prudent use of worldly wealth.

“He will either hate one and love the other, or be devoted to one and despise the other. You cannot serve both God and mammon,” he said about earthly riches.

Q&A
1. Why did the steward lose his job?
2. What were the debts owed to the rich man?

TRIVIA: Jesus said it is easier for what to pass through the eye of a needle than for one who is rich to enter the kingdom of God? (Hint: Matthew 19:24)

In Luke 16, Jesus told another parable about a rich man to show that people cannot serve both God and mammon.

In verses 19-31, we read about a rich man who wore fine clothes and ate the best foods.

Lying at his door was a poor man named Lazarus, who was covered in sores. Lazarus would have gladly eaten scraps that fell from the rich man’s table, but the rich man ignored him.

There came a day when both the rich man and Lazarus died.

Lazarus was carried away by angels to the bosom of Abraham, while the rich man went to the netherworld, a place of torment.

Far off in the distance, the rich man could see Lazarus with Abraham.

“Father Abraham, have pity on me,” the rich man cried. “Send Lazarus to dip the tip of his finger in water and cool my tongue, for I am suffering torment in these flames.”

“But now he is comforted here, whereas you are tormented,” Abraham said.

Edward was a good king known for being patient, cautious and flexible. During his reign, England became a more peaceful and united country than it had been before he became king.

Edward’s holiness was visible through his care of the poor and his generosity to the church. He also became known for his miracles. It is said that water in which he washed his hands was used to cure people of epilepsy and skin diseases.