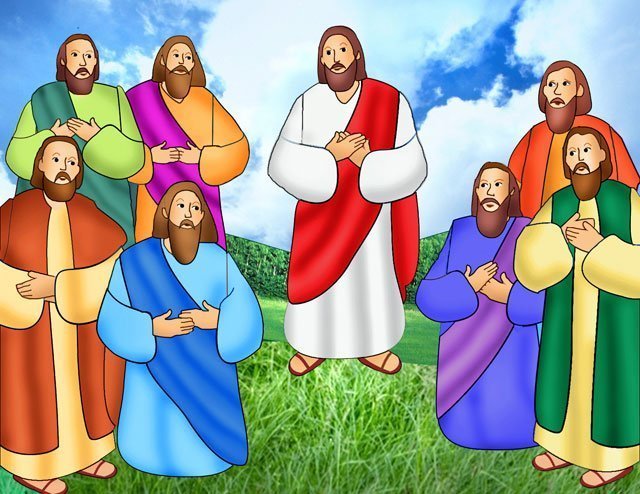 Jesus tells the people many things

Jesus tells the people many things

One day, Jesus noticed that a large crowd of people had come to hear him teach. He decided to climb a nearby mountain so everyone could see and hear him.

Jesus spoke about many things that day. He said that the peacemakers, the clean of heart, the persecuted, the merciful, the meek, the poor in spirit, those who mourn and those who seek righteousness are all blessed. He warned the people not to seek revenge when they are wronged, not to be angry with one another and to love rather than hate their enemies.

He reminded the people not to worry about their lives, and what they would eat and drink and wear, because God would always take care of them.

“Look at the birds in the sky; they do not sow or reap, they gather nothing into barns, yet your heavenly Father feeds them. Are not you more important than they?” the Lord asked.

Jesus also taught that when people do good things, they should not call attention to it, “otherwise, you will have no recompense from your heavenly Father.” He told the people that the Pharisees and scribes always called attention to themselves when they gave alms, when they fasted or when they prayed. He called them hypocrites — which means to claim to have beliefs but to act against those beliefs — and said to not be like them.

Instead, Jesus said when the people fast, they should not look unhappy and neglect their appearance, but instead should wash their faces and only let God see what they are doing. When they give alms, they should not make a big deal about it, and they shouldn’t even “let your left hand know what your right is doing, so that your almsgiving may be secret.”

And when they prayed, Jesus told them not to do so in public for others to see them, like the Pharisees and scribes did, and not to babble and use lots of words, like the pagans did.

“Do not be like them,” he said. “Your Father knows what you need before you ask him.”

He then gave an example of a good prayer to say. And today that prayer is known as the Lord’s Prayer.

1. Who are some of the people Jesus called blessed?

2. Whom did Jesus not want people to imitate?

Prayer was very important to Jesus. Throughout the Gospels, he could always be found praying. In Luke 11:1, one of his apostles asked Jesus to teach them to pray. Jesus then taught them what we now call the Lord’s Prayer.

Sometimes Jesus would go off by himself to pray. In Luke 5:15-16, we learn that he would heal great crowds of people, then afterwards find a deserted place so he could talk to God alone.

The Lord also prayed for other people, like those who had him crucified: “Father, forgive them, they know not what they do” (Luke 23:34).

Jesus also would pray with other people. In Matthew 26, we read that not long before he was crucified, he asked Peter and the sons of Zebedee to pray with him in the Garden of Gethsemane. It is also in the garden that Jesus acknowledged that prayers would not always be answered in the way we would like them, but according to God’s will.

And in Luke 18, Jesus told the parable of the persistent widow to show that we must pray without becoming weary, and show that we are faithful to God and his plans for us.