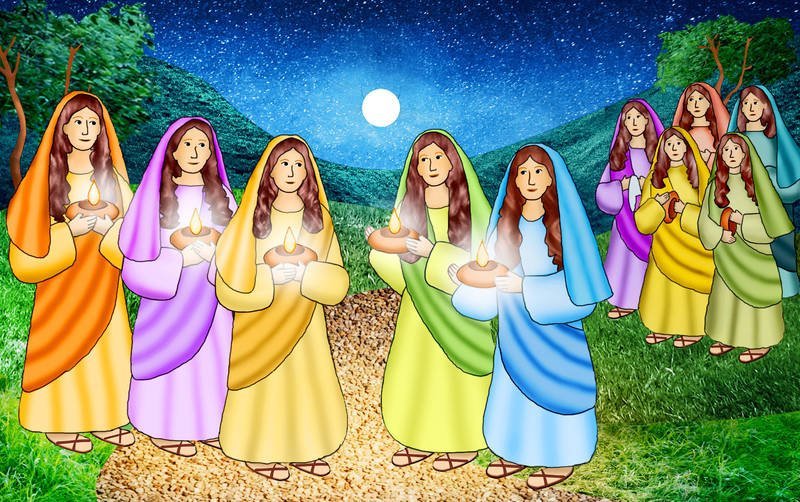 Jesus urges the apostles to always be watching for his return

Jesus urges the apostles to always be watching for his return

One day, as Jesus was sitting on the Mount of Olives, the apostles came to speak to him in private.

“Tell us, when will this happen, and what sign will there be of your coming, and of the end of the age?” they wanted to know.

Jesus described the signs of his coming, such as false prophets arising and the reports of wars. He also pointed out that only one person knows the exact time of his return.

“But of that day and hour no one knows, neither the angels of heaven, nor the Son, but the Father alone,” Jesus said. “So too, you also must be prepared, for at an hour you do not expect, the Son of Man will come.”

Jesus told his friends several parables so they would understand the importance of watching and being prepared for his return.

One of the parables was about 10 virgins.

“The kingdom of heaven will be like 10 virgins who took their lamps and went out to meet the bridegroom,” Jesus said.

Five of the virgins were wise and five were foolish. The five wise virgins brought extra oil with them, but the five foolish ones did not, Jesus explained.

Since the bridegroom was long delayed, the women became drowsy and fell asleep as they were waiting for him.

At midnight, they woke up to people shouting, “Behold, the bridegroom! Come out to meet him!”

The virgins got up and trimmed their lamps. The foolish virgins’ lamps were going out, so they asked the wise ones to share their oil.

“No,” the wise virgins replied, “for there may not be enough for us and you. Go instead to the merchants and buy some for yourselves.”

The bridegroom came while the foolish virgins were away buying oil, and those who were ready went into the wedding feast with him.

Then the door was locked.

When the foolish virgins finally arrived, they found the door locked and said, “Lord, Lord, open the door for us!”

“Therefore,” Jesus said, “stay awake, for you know neither the day nor the hour.”

1. What question did the apostles ask Jesus?

2. Which virgins ran out of oil?

TRIVIA: Where will the Son of Man sit to judge the nations? (Hint: Matthew 25:31)

Answer: Upon his glorious throne.

Also in Matthew 25, we learn how the Son of Man will judge the nations upon his return.

In verse 31, we read that all the nations will be assembled before the Son of Man and his angels.

“And he will separate them one from another, as a shepherd separates the sheep from the goats,” Jesus said. “He will place the sheep on his right and the goats on his left.”

Those on the right will be told to inherit the kingdom.

“For I was hungry and you gave me food, I was thirsty and you gave me drink, a stranger and you welcomed me, naked and you clothed me, ill and you cared for me, in prison and you visited me,” the Son of Man will say.

The righteous people will wonder when they saw the Son of Man and ministered to him.

“Amen, I say to you, whatever you did for one of these least brothers of mine, you did for me,” he will reply.

Those on the left will be told to depart into the eternal fire prepared for the devil and his angels because they saw the Son of Man in need and did not minister to him.

“And these will go off to eternal punishment, but the righteous to eternal life,” Jesus said.

Caterina Fieschi was born in Genoa, Italy, in 1447. When she was 16, she entered into an arranged marriage with Giuliano Adorn, who did not treat her well.

In 1473, Caterina had a vision of Christ carrying his cross. This vision changed her life, and she became devoted to prayer and caring for the poor in the slums of Genoa. Giuliano also changed and became a Franciscan tertiary. They both worked at the largest charity hospital in Europe, with Caterina eventually becoming its director.

Answers: the Lord us Lord door for open

Lord, Lord, open the door for us!