Jesus walks on the water, but Peter sinks - Catholic Courier 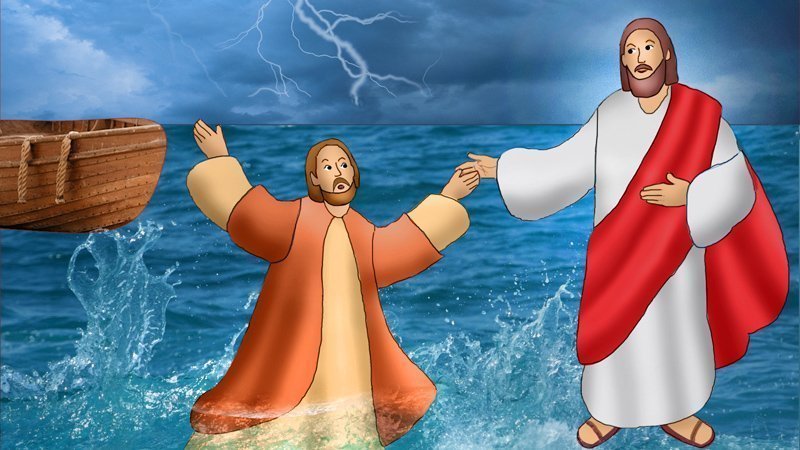 Jesus walks on the water, but Peter sinks

Puzzle: Circle the miracles of Jesus

Jesus walks on the water, but Peter sinks

Jesus was very sad after learning of John the Baptist’s death. He wanted to be alone for a little while, so he boarded a boat and went to a deserted place.

A crowd of 5,000 men — not counting the women and children — followed Jesus on land as he traveled by sea. Jesus saw them, so he came ashore and healed the sick.

When evening came, it was time for everyone to eat a meal. The apostles worried about feeding the huge crowd because they only had five loaves of bread and two fish. Jesus blessed the food and gave it to his friends to pass out. Miraculously there was enough for everyone to eat their fill, and there were even 12 baskets of leftovers.

Afterward, Jesus told the apostles to get into the boat and head across the sea while he went up the mountain to be alone and pray.

As Jesus was praying, a storm started brewing. The apostles’ boat was a few miles offshore when the storm hit.

The boat was tossed about by the strong wind and the churning water of the sea. The apostles tried very hard to continue across the sea, but they were traveling against the wind.

In the very early hours of the morning, Jesus came down the mountain to the shore. He wanted to join his friends, so he went out into the water. Instead of sinking into the sea, he walked on top of the water toward the boat.

The apostles cried out in terror when they saw a figure walking on the water toward them.

“Take courage, it is I; do not be afraid,” Jesus said.

Peter wanted to make sure it was really Jesus.

“Lord, if it is you, command me to come to you on the water,” he said.

Jesus told Peter to come to him. Peter left the boat and began walking on the water, but he became frightened and started to sink.

“Lord, save me!” Peter yelled.

Jesus reached out and grabbed Peter.

“O you of little faith, why did you doubt?” Jesus asked.

When Jesus and Peter got into the boat, the wind died down.

The apostles were amazed.

1. What happened when the apostles started to cross the sea?

2. How did Jesus reach the apostles in the boat?

Essay: How do you show Jesus that you trust in him?

Peter was a very special and important person to Jesus. It was Peter whom Jesus chose to be his first apostle. In Matthew 16, after Peter recognized Jesus as the Messiah, Jesus said Peter would be the rock upon which he would build his church.

Even though Peter was special and important, he was not perfect. He sometimes had doubts and fears that made him do sinful things.

When Peter and Jesus first met, Peter had been fishing all night but hadn’t caught anything. Jesus told Peter to cast his net where he had already fished and to prepare for a successful catch. Peter doubted Jesus but listened. Peter caught so many fish that the net began to tear.

When Jesus walked on the water during a storm and called Peter to him, it was Peter’s doubt and fear that caused him to sink.

And just before Jesus was arrested, Peter promised he would never deny knowing Jesus. But after Jesus’ arrest, Peter was afraid. When people asked him whether he was one of Jesus’ followers, Peter lied and said he didn’t know Jesus.

St. John Kemble was born in England in 1599. Hostility toward priests at the time made him sneak away to another country to attend seminary. After he was ordained a priest in 1625, he returned to England and ministered there for 53 years.

In 1678, he was arrested and sentenced to death during a persecution of Catholics. Before he was executed, he was allowed to finish his prayers, smoke and have a drink. When John finished, he was martyred.

Using the hints provided, put a circle around the miracles that Jesus performed. In front of each miracle is a letter. Unscramble the letters next to the correct answers to spell out an important word from the Bible story.